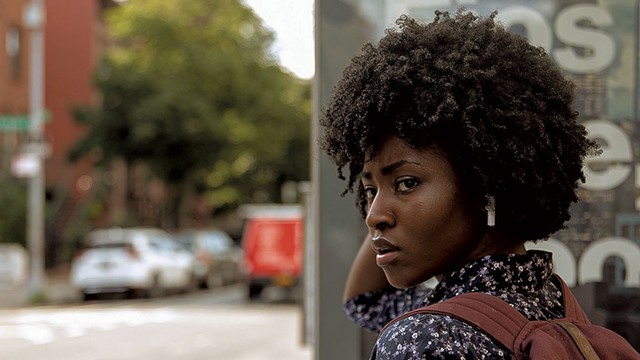 Our streaming entertainment options are overwhelming — and not always easy to sort through. This month, Vermont International Film Foundation streams a program of films directed by African American women from February 19 through 28 as part of the Split/Screen series. I watched Farewell Amor, a 2020 Sundance Film Festival award winner from first-time feature director Ekwa Msangi. Find the whole program at vtiff.org.

Walter (Ntare Guma Mbaho Mwine), an Angolan cabdriver in Brooklyn, has been working for 17 years toward a reunion with his wife, Esther (Zainab Jah), and daughter, Sylvia (Jayme Lawson), who remained behind in Africa.

But when they finally arrive, joy soon turns to awkwardness. With her constant talk of God and prayer, Esther makes Walter uncomfortable. It doesn't help that, until recently, he was sharing his apartment with another woman (Nana Mensah), whose company he misses.

Teenage Sylvia, meanwhile, misses her friends and the culture of music and dance she loved at home. But when Sylvia befriends a boy at school who introduces her to the local dance scene, Esther fears for her virtue. Told in three parts, one from the perspective of each main character, Farewell Amor asks whether this family unit can survive the rigors of reunification.

Farewell Amor offers a graceful reminder that there are two sides to every story — or, in this case, three sides. Each segment of the film starts with the family's joyous reunion at the airport and proceeds through the same basic narrative. Each also shows us something new, forcing us to reevaluate what we've already seen.

In Walter's segment, we learn how much more at ease he feels in a dance club, swaying with his former lover, than at home with a moralizing wife. In Sylvia's segment, we watch father and daughter bond over this love of dance, which Esther seems to see as a gateway to sin.

The last segment, however, is the most revelatory, because it transforms Esther from an antagonist to a protagonist: a sensitive, lonely woman who misses the community of her church and wields religious rhetoric as a cudgel to keep fears at bay. In her tentative friendship with a chatty, very Brooklyn neighbor (Joie Lee, sister of Spike), we finally glimpse the parts of herself she hides from her family in an effort to project strength.

Jah gives a compelling performance as a woman who initially seems easy to hate, while Mwine is a quiet, riveting presence and Lawson is electric on the dance floor. Director Msangi uses close-ups to powerful effect, spotlighting evanescent moods and details — the fall of a telltale necklace on a woman's neck, the sway of dancers' hips.

Farewell Amor resembles another recent film about African immigrants, His House, in emphasizing the baggage that newcomers bring with them from the old country over the reception they receive in the new one. The second issue certainly isn't ignored: In His House, the processing that immigrants receive in the UK is depicted as distressing and alienating, and in Farewell Amor, Walter tells Sylvia that as a Black man in the U.S. he must struggle constantly to appear "unthreatening."

In both these movies, though, the focus isn't on oppressive institutions or culture shock per se, but on the protagonists as people who juggle those problems with more individual ones. Only dance, Walter tells Sylvia, allows him to be his true self in his new home, and we feel privileged to see him expressing that self on the floor. Farewell Amor ends with a cleverly choreographed scene suggesting that family life is a dance of sorts, too, and a dance worth doing.

Losing Ground (1982; VTIFF Virtual Cinema, February 19-28): Another Split/Screen offering is this landmark drama directed by Kathleen Collins, whose work remained obscure until recently. With a careful eye and an indie sensibility, the Black filmmaker (who died in 1988) chronicled the troubled relationship of a philosophy professor and her artist husband. Dance plays a key role here, too, as a vehicle of expression and liberation.

One Night in Miami (2020; Amazon Prime Video): Regina King, who won the Best Supporting Actress Oscar in 2019, is in the awards conversation again, this time as the director of this absorbing showcase for four actors playing icons of Black history.

Cuties (2020; Netflix): Netflix's ill-advised ad campaign led to huge blowback against this film from French director Maïmouna Doucouré, about an 11-year-old Senegalese immigrant who joins a dance team and starts "twerking." That terrible poster aside, most critics say it's actually a sensitive portrait of a kid struggling with conflicting cultural pressures — her own story, the filmmaker has said.

The original print version of this article was headlined "Farewell Amor"