Retrofitting: Saving Energy (and Environment) in a 1950s House 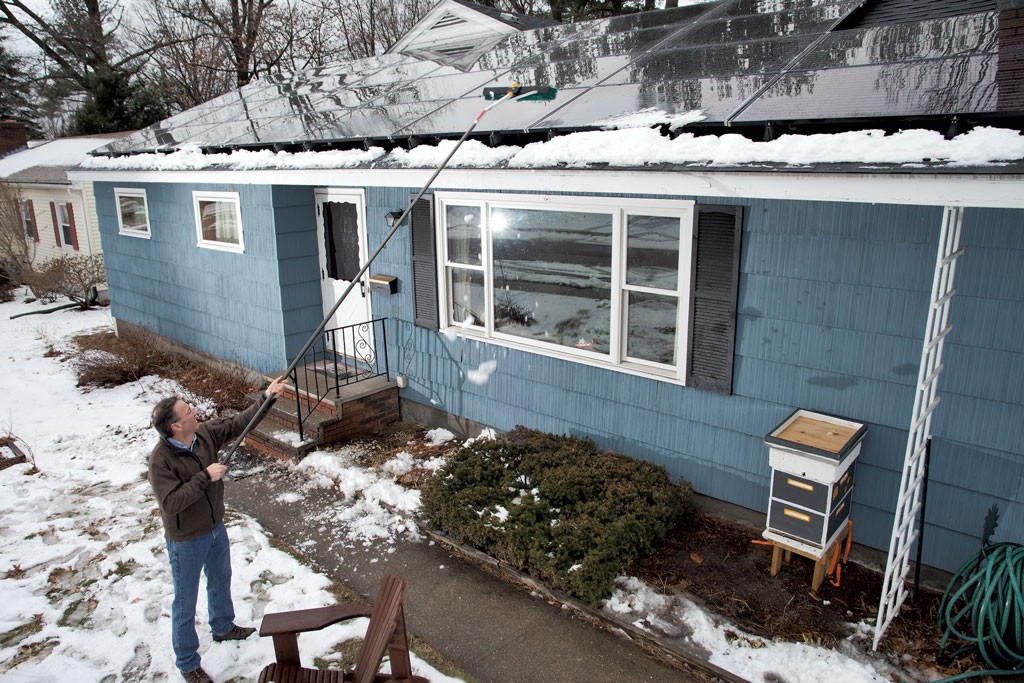 It's 15 degrees Fahrenheit the morning that Seven Days stops by the home of Li Ling Young and Nik Ponzio in the Burlington neighborhood behind Lake Champlain Chocolates on Pine Street. Inside? A luxurious 69 degrees.

New Englanders accustomed to skimping on their fossil-fuel consumption — whether out of respect for the environment or their wallets — would likely frown on such profligacy. But Young and Ponzio don't have to burn natural gas, fuel oil or propane to create that heat. Seventy percent of their heat comes from an air-source heat pump powered by electricity that's generated by rooftop solar panels. The other 30 percent is from two highly efficient woodstoves.

In fact, those 38 photovoltaic panels on the house's south-facing roof, along with three cords of wood used annually, generate as much energy as the occupants need. (The couple has two children, one currently away at college). That includes water heating, electricity and one electric car, charged in the garage. Young and Ponzio's house is "net zero," i.e., one that produces as much energy in a year as it consumes.

Some net-zero advocates would differ, citing the fact that Young and Ponzio don't produce their wood; they buy it. But wood is nevertheless a renewable energy source, and it's carbon-neutral because it sequesters carbon dioxide in the environment. "These are fluid terms," says Ponzio.

As for their electricity, the couple produce pretty much what they use. Young can tell the ratio exactly: "We buy 1 percent of our electricity," she says, sitting on a couch beside the currently dormant living room woodstove. That's because they have a whole-home monitoring system: Their electric panel has been wired so that every source of electricity usage, as well as each solar panel's electricity generation, is tracked and uploaded to the internet moment by moment.

Ponzio opens his tablet and calls up eGauge, the app for their whole-home monitor, which provides instant graphs over any time span. Last year, the house generated 10.6 megawatt-hours of electricity, the green bars show; it consumed 10.8.

Young and Ponzio began retrofitting their 1955 single-story ranch two years ago and have been keeping a blog about the process. They've seen such amazing results that they named the blog Energy Freak Show and subtitled it "Chronicles about the living laboratory we call home." One post, titled "Payback, Baby!" shows two documents from the Burlington Electric Department: a "bill" for zero dollars and a check for $1,000. The latter was credit for the energy the family produced beyond what it used. Eventually, Young and Ponzio plan to eliminate wood burning and work toward a fully renewable-electric home — a goal that, if duplicated in enough residences, would help slow global warming.

The two are not only mission-driven; they also work in the energy sector. Young is a senior energy consultant in the residential energy services department of Efficiency Vermont, the state's efficiency utility outside Burlington. (In town, Burlington Electric fills that role.) Before that, she worked in construction for an energy-minded building contractor.

Ponzio, an engineer for renewable-energy systems, designed and sold solar photovoltaics, solar hot water and wind-power systems with Vermont Solar Engineering until he cofounded Building Energy in Williston in 2007. There he is also a project engineer. 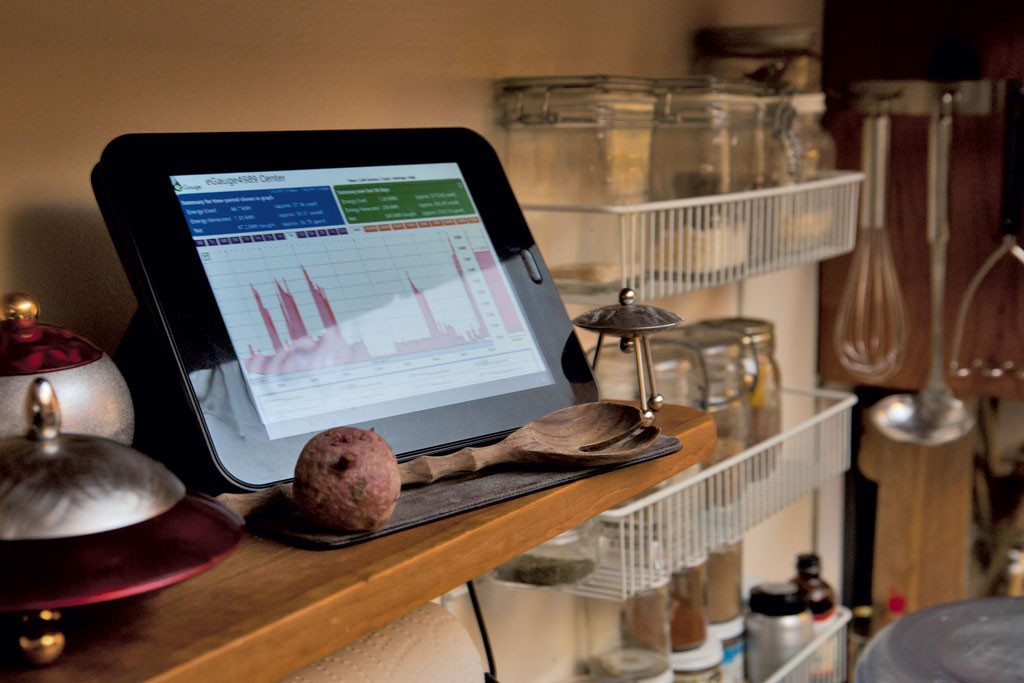 When he and Young went looking for a house — they moved in during the spring of 2012 — they hoped to find one where they could prove that existing homes can be brought to net-zero status. New buildings can now easily be designed as net-zero. But until recently, few people attempted to retrofit older homes — the ones where the majority of Vermonters live.

Retrofitting has been made possible by a decline in the cost of solar panels — by as much as 75 percent since 2008 — and the advent of net metering. The latter eliminates the need to store home-generated energy in batteries; residents can instead sell it to the grid. In Vermont, electric utilities are required to buy energy produced by residences at the same rate they charge for usage. And residents receive a bonus for that energy, called a feed-in tariff.

The house Ponzio and Young found on Cherry Lane met a few key requirements for retrofitting. Like virtually every house in the neighborhood, it is relatively small at 1,400 square feet. It dates from the 1950s, an era of solid construction. And it has a large roof span, due to its ranch design, which faces directly south — two important factors for solar panels. Also, the house hadn't undergone substantial remodeling. "It wouldn't have made sense to go into a home that had just had $20,000 of work," notes Ponzio.

At $280,000, the price was "a big stretch for us," says Young. But a concession from the seller took care of most of the cost of removing asbestos-laden insulation from the attic. Renewable-energy incentives for solar installations, including a 30 percent federal tax credit (which expires at the end of 2016) and a state incentive of 25 cents per watt (just expired), whittled the costs of the couple's 9,390-watt solar-panel array down to $20,000.

Ponzio was able to get the panels and other equipment at wholesale prices and install them himself. Lay folks may not be able to access such savings, but the couple make every effort to discuss cost-saving measures on their blog.

"I'm really interested in knowing this work can be affordable," says Young. To that end, they've documented all the cost-containment thinking that went into each step of their net-zero journey.

The pair began by solidly insulating their house — a must before installing solar, and a first step for homeowners with a net-zero goal. They blew three feet of cellulose into the attic, dense-packed the exterior walls with cellulose blown through holes bored in the 1955 cedar shingles, and air-sealed every crack. In the basement, they applied 6-inch foam board to the cement-block foundation, and they dug out the exterior of the foundation to insulate it, too. Insulation is still in progress in an addition that contains the master bedroom — one of three bedrooms — and a basement room below it.

When the home's meticulously maintained but aging oil furnace failed in the first six months of their ownership, Young and Ponzio pondered their options and came up with an air-source heat pump. "It's magic!" Young says, explaining that the pump works just like a refrigerator but can use even very cold outside air to create heat. (The blog offers her full explanation of the physics of its mechanism.) The pump costs a little more than natural gas to run, much less than propane and about the same as fuel oil. But, in tandem with the solar panels, it's powered by renewable energy that doesn't increase global warming.

The heat pump, a trim, white, rectangular machine about three feet long, sits high on a kitchen wall. The heat blowing out of it has to reach the living room and bedrooms on its own. When it does, however, the insulation keeps it from escaping. (The heat pump produces cold air in the summer; Ponzio and Young use it a few days each year as an air conditioner.) Young hopes someday to knock down the wall between the kitchen and living room to increase heat circulation — heat pumps work best with open floor plans — and natural light.

Today, however, the house is at 69 degrees, even without the heat pump. All the heat is coming from the basement woodstove, a Lopi. That's because Young looked at the weather report when she woke up. "I knew it was going to be sunny," she says, "so I decided not to fire up the woodstove" in the living room, which gets full sun, or the heat pump. Houses like this one, which Young calls "energy-light," "take a lot of active engagement from the occupants," she adds. "It's very different from 'energy-rich' homes," which can be run on autopilot.

All these improvements in efficiency might make one wonder: Do Ponzio and Young find themselves using more energy because they can do so without affecting the environment? It turns out the efficiency industry has a term for that — "takeback" — and has measured it, Young says. People almost never use significantly more energy than before they instituted efficiency measures.

Young and Ponzio may have kept the heat slightly lower in their old house, but in general their habits haven't changed, they say. "We've been conserving for many years," Young says, "and we've found the level of conservation that we feel empowered by and that allows us to live comfortably."

Young and Ponzio hope to empower others, too, through their blog as well as by participating in energy-efficiency tours. The house was one of eight included on an October 2013 tour organized by the Burlington committee for the Vermont Home Energy Challenge, a statewide competition among Vermont towns hosted by Efficiency Vermont. The same group of volunteers — led by Jennifer Green, sustainability coordinator at Burlington's Community and Economic Development Office — put Young and Ponzio's house on a four-home tour to celebrate Earth Day in April 2014.

One "tourist" who drew inspiration from the couple's retrofitting was Peter Jones, who lives in a 1964 raised-ranch house in South Burlington.

"The air-source heat pump was a no-brainer," Jones recalls thinking after seeing Young and Ponzio's. Ponzio proceeded to install Jones' heat pump, which typically costs $5,000, including installation. The stay-at-home dad decided against the heat-pump water tank, however, because he had installed a solar hot-water heater on his roof years before, along with photovoltaic panels. ("I put up solar panels too early," Jones admits; he is now engaged in a multiphase insulating project.)

"I'm just a layperson who's interested in doing what a lot more people should be doing," says Jones, whose goal is to reach net-zero without burning any fuel, including wood. "We can't all wait around for a magic bullet; we've got to step up and make a difference to slow down global climate change."

CEDO's Green appreciates the "exciting array of different things [Young and Ponzio] have going on" in terms of their energy-efficiency measures. She also champions their choice of a house that is modestly sized and close to downtown, cutting down on transportation energy usage.

"One of the best things you can do is live downtown in a tight, urban home," Green says. "That's what it's going to be all about."

The original print version of this article was headlined "Retrofitting: Saving Energy Costs and the Environment — in a 1950s House in Burlington"