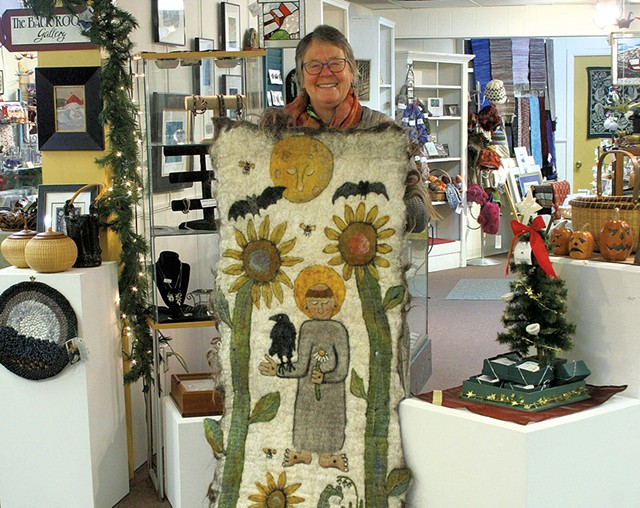 One spring day, Amanda Weisenfeld of the Northeast Kingdom Artisans Guild in St. Johnsbury received an email from a woman in California. Cheryl Maynard usually shopped at the guild's store whenever she returned to her hometown to visit her mother, but this year was different.

She couldn't travel during the nationwide pandemic but didn't want to miss her time at the gallery — knowing it needed her business more than ever. Though the store was closed at the time to flatten the coronavirus curve, Weisenfeld shopped with Maynard by phone, walking around the displays and describing the products.

"They have so many wonderful artists there, and I love supporting them," Maynard said during a recent phone interview. "Places I support on a regular basis, I just don't see why I shouldn't continue to support them during this difficult time."

Altogether, Maynard spent about $400. She was thrilled when the box arrived from Vermont, she said.

"She just went out of her way to support us," Weisenfeld said last week in the guild's shop on Railroad Street. "She also bought individual artists' work, so they got paid ... She really went the extra mile."

"They have so many wonderful artists there, and I love supporting them." Cheryl Maynard tweet this

Like many small merchants in Vermont and elsewhere, NEK Artisans Guild has survived this year on the devotion of loyal customers who see the value of keeping their dollars in their community.

The 10 original founders of NEK Artisans Guild started it 23 years ago to give artists like themselves a common setting to connect to customers. The first gallery was at the Catamount Arts building. The guild moved to Railroad Street a year later, as its membership grew.

"Our original purpose was a place for artists to sell their work and a place for people who are looking to buy local art — and to bring the two of them together," said Weisenfeld, who sells her hand-felted designs through her business, Under the Moon.

The guild now has more than 100 member artisans from across the state and a few from New Hampshire. The members own the store and receive a minimum of 60 percent of each product they sell. Those who serve on the board of directors, like Weisenfeld, or who work more hours at the store can boost their commission to 70 or 80 percent.

The guild's cut of each sale goes toward operating costs — rent, electricity, a few part-time employees, advertising and displays.

A few years ago, the cooperative's leadership loosened its requirement that artists sell only original art, no reproductions, after an artist who wanted to join said she relied on her reproduction sales to boost her income. "It's now an important part of our revenue," Weisenfeld said.

Reproductions give shoppers a chance to buy less-expensive artwork: a $90 reproduction, for example, of a $500 original painting. Throughout the shop, NEK Artisans Guild sells a head-spinning array of creations at a range of prices. Horizon Porcelain mini ornaments cost $13; simple dangling Lochlin Smith earrings, $30; and a woven wool baby blanket, $60.

Some of the most popular items these days are the Neysa Russo felting kits that sell for $38 and come in a variety of designs, from llamas to elaborate tapestries. "Felting has become such a hot thing, and they just want to get started," said Danville's Susie Duckett, a wool artist herself and a guild founding member. "One thing this pandemic has done is bring people back to the real things ... stuff you can't really buy online."

NEK Artisans Guild closed in mid-March, right before Gov. Phil Scott's lockdown of all nonessential businesses. The guild's leadership reached out to its artist members and extensive email list of visitors, asking for help. Many stepped up with donations, including Maynard, who gave $300.

Some artists chose pieces they had in the store for the guild to post on Instagram and Facebook as a fundraiser, and the artists donated their portion of the proceeds from the items that sold. Currently, the guild offers no option to purchase art through its own website, though Weisenfeld said she expects that to change as the guild recognizes the need to stay nimble during a crisis.

"Nobody wants a pandemic, but that said, I think we've all learned something," she said. "We have learned that it's very important to not have all your eggs in one basket, in just having a gallery where people come in. You have to have other ways to sell."

NEK Artisans Guild also got a financial boost from a small-business grant — nearly $13,000 — through the Vermont Agency of Commerce and Community Development, Weisenfeld said. "That was a game-changer," she said. "We knew that we were covered. We were going to be able to pay our rent through the end of the year."

Since NEK Artisans Guild reopened at the end of May, the owners have seen encouraging trends, Weisenfeld said.

At that time, the guild added visits by appointment on Sundays, when it is otherwise closed, mostly for people who feel extra cautious about avoiding potential virus exposure. Interest in those exclusive visits has exceeded expectations, Weisenfeld said; customers have come from Boston to spend the day in town and some time and money in the guild store.