This spring, Bluebird Barbecue culinary director Dan Miele was juggling myriad tasks to get the Burlington restaurant ready for its first dine-in customers in two years. Along with hiring challenges, spiking ingredient costs, supply chain gaps and continued COVID-19 concerns, Miele — and many other Chittenden County resto managers — have faced another issue: Should they change their takeout foodware choices?

Early in the pandemic, when Bluebird reopened for takeout only, the team decided to go with compostable foodware made with materials such as sugarcane, wheat straw and cornstarch. Miele said the team felt good about its decision, and customers seemed happy, too.

The difficulty of distinguishing compostable from recyclable look-alikes forced this decision, explained Ethan Hausman, the waste district's business outreach coordinator. When non-compostable plasticware ends up in the compost waste stream, it contaminates resulting compost products with tiny shards of plastic that can't always be screened out, he explained.

Then, at the waste district's facility, "It's 17 zillion items at a time coming in a 5-ton food-scrap load, and everything is smeared with food scraps and icky," he said. "There's really no chance of being able to differentiate."

The change in policy hit many restaurants at a time when they had little bandwidth to research and make a change. "It was a little bit of a shock," Miele said.

For now, he said, Bluebird has decided to stick with the compostable line.

"At least if it goes into the landfill, it's compostable," he added — repeating a widely held, major misunderstanding. 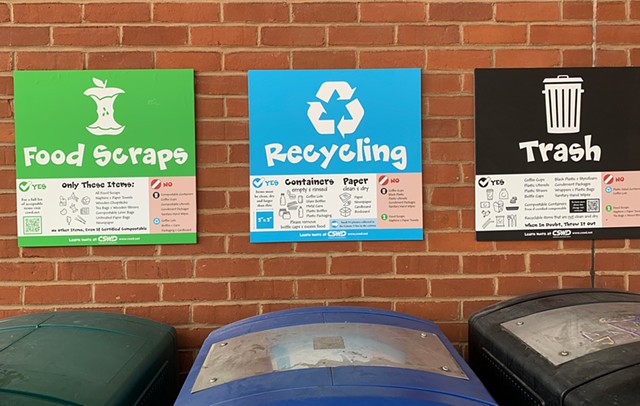 In fact, compostable items buried deep in a landfill will not decompose because they need air to break down, Hausman said.

Hausman recommends that restaurants source recyclable containers, ideally made with at least some recycled materials. "The equation is much more complex than just, 'Can we keep it out of the landfill?'" he acknowledged. "What are the environmental and sustainability impacts throughout its life cycle, including what it takes in terms of energy and resources to make that product?"

To add to the confusion, plant-based bioplastics, which are often labeled with a recycling triangle and the number 7, are not actually recyclable, Hausman said. Now that they are not accepted for composting in Chittenden County, they can only go in the trash.

"Trying to do the right thing is extremely challenging," said Justin Cruz, co-owner of Eco Bean + Greens in South Burlington. The café had transitioned to all compostable foodware and is now trying to move back to recyclable for takeout and reusable dishware for on-site customers.

The latter presents a staffing issue. "I need a dishwasher, and I can't find one," Cruz said. His team is already spending significant time going through the restaurant's waste to make sure it is sorted right.

"It is getting so complicated to throw your trash out," Cruz continued. "We find that consumers are mentally fatigued with the decisions, and they just say, 'Screw it.'" 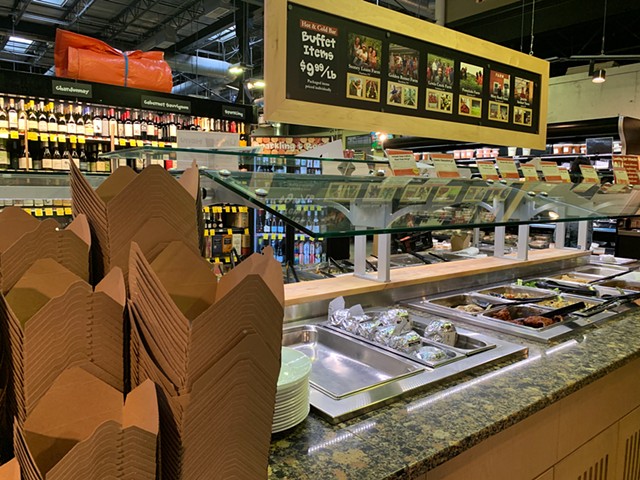 The co-op has redesigned its waste signage. It has also switched all prepared foods and hot-and-cold-bar containers to recyclable options made from as much recycled material as possible. Cutlery remains a problem, as there are no good recyclable options, Quilty said.

The recyclable brown boxes at the hot and cold bar must be empty and clean before being placed in the recycling bin.

The cleanliness question is "tricky," Hausman acknowledged. "If it's not reasonably clean, we don't want it in recycling."

When eating from recyclable containers in a location where it is not possible to wash them, Hausman recommends that customers wipe them out with napkins or paper towels. (Those are still compostable.) As a general rule of thumb, Hausman said, "If you can still identify what was in the container, that's probably too much residue."

If people eat their takeout food at home, natural fiber foodware like the line Bluebird uses can still be put in home compost piles, though it generally needs to be cut or torn into small pieces to break down well.

Miele has figured out how to compost the containers he brings home from work: He runs them through his paper shredder and adds them to his backyard compost.

The original print version of this article was headlined "Compost Conundrum"