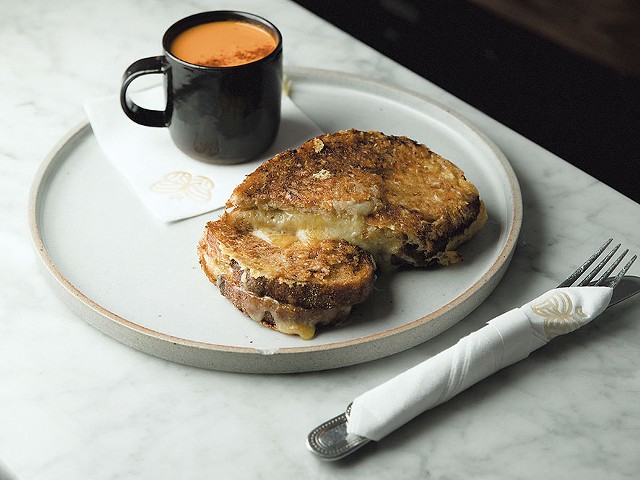 In recent years, few Queen City restaurant debuts have had as much buzz as Monarch & the Milkweed, which opened at 111 St. Paul Street in August.

Part of that buzz stems from the reputations of its principals and staff: Chef-owner Andrew LeStourgeon led Hen of the Wood's pastry department from 2012 to 2015, following a string of swanky executive pastry gigs in New York City. His partner, Rob Downey, helped launch American Flatbread, the Farmhouse Group and Zero Gravity Craft Brewery and is involved with the Great Northern, which will open on Pine Street next spring.

Behind the bar, Jeff Baumann — who developed Prohibition Pig's cocktail program — works in tandem with newcomer Ian Hood, a cicerone and sommelier who worked for big-name New York chefs, including Daniel Boulud and Marc Forgione.

Since Monarch's inception, LeStourgeon has described it as a pastry shop and "fine diner." In practice, it has some of the trappings of a gleaming American classic: It's open from breakfast through dinner, has a well-stocked pastry case and offers service that doesn't coddle but food that does.

But there the "diner" allusion ends and the "fine" begins. The restaurant is glossy-chic and tiny. Upon entering, you feel that you've entered a miniature marble palace. Fluted chandeliers cast warm light. Napkins are branded by hand with the restaurant's stylized butterfly logo. The white walls display handsome found-wood assemblages by Vermont artist Duncan Johnson.

Happily for patrons, this care for detail extends to the food — sourced from local farms and served on handmade stoneware plates. LeStourgeon and Wagenknecht painstakingly workshop each dish from the spark of an idea to perfection. Wildermuth reworked her chocolate chip cookie recipe 20 times.

In the morning, you might stop in for a coffee and pastry. Monarch's house drip ($3) is custom-blended at Brio Coffeeworks, the Pine Street roastery that toasts micro-batches of beans to their ripe, cherry-fruit ideal. Forgive me, dark-roast drinkers, but I believe Brio is putting out the finest coffee in Vermont right now.

Or you could start with an espresso ($3) — made with smooth and creamy Nespresso — or an affogato ($5) if you like caffeinated ice cream for breakfast, as I do.

But do yourself a favor and order a pastry ($3 to $10), too. On the morning after the election, a tall, tightly wound cinnamon bun (and, OK, a stiff cocktail) eased my political pain. Other days, I've sipped coffee over Wildermuth's billowy cream puffs or brittle-shelled Linzertortes, which corral warm-spiced raspberry jam beneath a dusting of sugar. Everything is Goldilocks sweet: neither cloying nor lacking.

A savory wake-up could entail a petite quiche ($10). The one I tried revealed a surprise cache of caramelized onions. Then, the crackly crunch of a hash brown ($4) gave way to a soft and creamy shredded potato interior. Another morning, two herb-laced, crumbly biscuits were nestled in peppered sausage gravy; these warmed me from the inside out. And at $9, the dish is easily two portions.

At lunchtime, the menu swells to include soups, salads and sandwiches ($10 to $15). As half orders, these make for a swell game of mix-and-match. To wit: A cup of cream-tinged, spicy tomato soup is just the thing to soften the charred-cheese crust of Wagenknecht's grilled cheddar-Gruyère sandwich. For a bit of green, a small Caesar sparkles with silver-blue anchovies, which were so pleasant and mild that I expect even the anchovy-averse could enjoy them.

I'd be remiss not to mention that, for first-time breakfast or lunch guests, Monarch's counter-service format can be a bit jarring. Viewed through picture windows from the street, the restaurant's banquette row of pedestal tables seems to suggest a sit-down bistro. But step inside, and you'll need to approach the register to place your order.

Those plagued with indecision might feel on the spot, especially if someone in line behind you is in a rush. You order, pay and take a number.

If you asked for drip coffee, you turn to the counter at your back and fill your own cup. Opt for an espresso, cocktail or beer, and you'll have to stand aside and wait for the folks behind the counter to pass it forward, and then find somewhere to sit.

Given the somewhat upscale setting — at comparable restaurants, service usually begins with a "Please wait to be seated" sign — Monarch's DIY approach can be disorienting. But LeStourgeon likes the informal model because it opens the restaurant to solo newspaper breakfasts, quick catch-up lunches with friends and quiet afternoons with a laptop. He says he likes the flexibility that comes with "not forcing full service on everyone."

During my first visit, the inability to keep an open tab had me wondering: What if I want another cocktail? If I did, I'd have to get up and ask for one — and then pay again. Imaginary brunch nightmares swirled through my mind. To LeStourgeon's credit, though, the process does compel careful consideration before ordering a second daytime drink.

At dinner, however, the restaurant switches to table service, which means you can order as many glasses of milkweed punch ($10) as you dare. One cup of that rum-lemon, lighter-shade-of-pale ambrosia is definitely not enough. Opalescent with whey and a light, creamy head, the drink twinkles with icy shards.

You could also go with a spot-on Manhattan or kaffir lime fizz (both $11), or a draft beer or glass of wine from the bar's brief but thoughtful lists.

Monarch's dinner menu is more hair-down than French twist. Think house-dipped local corn dogs (three for $12) and — just in time for the holidays — pecan-crusted cheese balls ($12), baked beans ($6) and venison chili ($11). But if the menu reads as approachable and homespun, the kitchen classes up its dishes in the details.

As with breakfast and lunch, most of Monarch's dinner portions are modest compared with those at other restaurants in town. But, if I may hop on a soapbox for one second, grandiose portions are favors to no one — certainly not to the 25 percent of Vermonters who are clinically obese, nor to anyone whose soaring insurance premiums fund treatments for society's weight-related health problems. End soapbox.

So, Monarch's portions: I like them. You can clean your whole plate and leave satisfied instead of food-coma full. I like eating, and I've never left the place hungry.

A $6 side of mac and cheese is just that — a side. Beneath a layer of toasty everything-bagel bread crumbs, pasta spirals clung together with a silken blend of clothbound cheddar and American cheeses. A smallish Waldorf salad ($10) was all cool, watery crunch — a bird's nest of sweet, julienned apple sticks on top of pristine iceberg lettuce, diced celery, candied pecans and scattered currants.

Sandwiches ($12 or $13) err on the large side and offer solid bang for your buck. One night, my smoked bluefish melt broke with a lustrous crunch. The fish salad inside tasted of wafted smoke and sanguine citrus punctuated with bits of celery and hazelnut.

That night, inside the butter-cloud brioche bun of my date's pork-belly sandwich, sweet pickle chips and red onion so lifted the weight of the barbecue-glazed meat that I almost forgot it was a bacon sandwich. The crunchy dill spears on the plate might have come straight from a Jewish deli.

And — again thanks to Monarch's reasonable portion sizes — you'll likely have room for dessert. You might nibble on Wildermuth's Brooklyn blackout cake à la mode in all its chocolate-ganache-and-housemade-Oreo glory ($10).

That was too much for me, but I couldn't resist the pull of the glowing pastry case near the register, or of a silver-dollar-size frangipane tart. Its almondine filling concealed a thin layer of jam — and I'm still thinking about the glistening vanilla-bean plums on top.