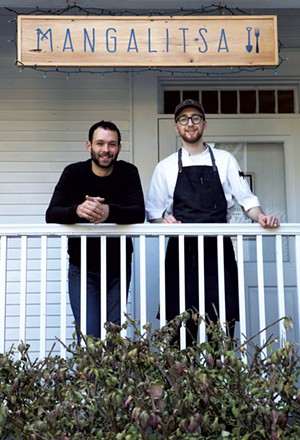 Every partnership begins with a meeting. In the case of Matt Lombard, 33, and Nick Laurendeau, 21, that meeting took place at Twin Farms, an exclusive inn in Barnard. How exclusive? Last summer, Ivanka Trump and Jared Kushner allegedly flew in by helicopter. Guests at the resort are invited to borrow from its fleet of BMWs. The least expensive room is about $1,400 per night.

Lombard spent five years at Twin Farms, working as part of the team that managed all aspects of the front of the house, from helping curate the wine and cocktail lists to handling customer service in the dining room.

Just shy of two years ago, fresh out of New England Culinary Institute and with a few prestigious internships under his belt, Laurendeau scored a job in the inn's kitchen.

The two men frequently worked together, making sure that service went smoothly for their well-to-do guests. And they shared a desire to bring exceptional food and hospitality to a wider audience. At the end of September this year, they opened their own restaurant, Mangalitsa, in Woodstock. It's in the former Central Street quarters of the much-loved Osteria Pane e Salute, which closed in April.

The 26-seat space is cozy, and the owners have combined spare, modern décor elements with rustic touches. The dishware and tile floor are contemporary white and black; that pairing is repeated on the walls, alongside some pale-gray accents. In contrast, one window is lined with jars of homemade pickles, one wall is covered in barn board and a pair of pitchforks hangs near the bathroom door. The menu is printed on cream-colored paper with a font more playful than refined.

Farm-y elements are just for show at some restaurants, but Mangalitsa has agricultural cred. Lombard, whose first-ever job was cooking at Pane e Salute in 1998, has a background in dairy farming and raises many of the animals for his new restaurant. They include the hairy Hungarian swine for which Mangalitsa is named. Other ingredients come from nearby farms.

The vision statement on the restaurant's website sets a simple standard: local. Other standards become evident as one dines. Cocktails are intriguing, using ingredients such as local Concord grape. The service is warm and well paced: Courses arrive exactly when you begin thinking that you're ready for another bite. Each plate is carefully constructed to showcase color, shape and texture.

Laurendeau puts his spin on seasonal ingredients, producing dishes that are elegant but not fussy. On a recent night, the menu offered broccoli soup with aged cheddar and black garlic, and a multi-squash risotto with kale and pine nuts.

But it was the seafood, delivered by Wood Mountain Fish, that first caught my eye. That night, the ever-changing selection of small plates included whole smelts ($14). A half-dozen silver fish, headless and gutted but with tails intact, were fried crisp and stacked on top of scallion mayo, with slices of Meyer lemon on the side and sprigs of fried herbs on top. My dining companion and I crunched through the fish, delighting in the crisp outsides and tender centers and at the way the mayo and lemon garnishes hinted at classic fish and chips.

Then we sampled the lobster ($20). The shellfish was prepared using a technique made famous by Chef Thomas Keller of the French Laundry: A whole lobster is cooked in water until its meat pulls away from the shell; then it's dismantled and the flesh is finished in simmering butter.

Our lobster was just cooked through and was so tender that it quivered at a touch. It was beautifully plated with quenelles of butternut squash "pudding;" whole, bright-green Brussels sprout leaves; and a garnish of shredded horseradish and foam that approximated sea spray. All of the elements in the dish melded perfectly: the sweet salinity of the lobster, the tang of the horseradish, the crunch of the sprouts.

Mangalitsa's menu offers housemade pastas as a separate course between the small plates and entrées; we chose one called "gnochetti" ($20). The ridged, shell-shaped pasta is dense and stands up to hearty toppings. Ours came bathed in a spicy tomato sauce, which gathered in the pasta's curves and striations. On top was artfully seasoned sausage made with Lombard's pork and flavored with garlic and fennel, along with some micro basil and shreds of Parmigiano-Reggiano. Nearly any diner would enjoy such a homey and flavorful dish, but knowing that the sausage was made in-house from the owner's pork made the dish even better.

Our final savory course was a rack of lamb ($36), rare, with celeriac purée, rings of delicata squash and a bit of arugula. Again, the food was ideally seasoned and prepared; it looked like a still life on the plate.

When my dinner date and I failed to finish our lamb entrée — we were saving room for dessert — Lombard asked if we'd found it improperly cooked. We assured him that it was perfect and asked if we could get it wrapped up.

At the end of our meal, the lamb failed to reappear. Lombard had been so concerned about whether we were pleased that he hadn't registered my "to-go" request. When I mentioned it, he offered to replace the lost portion with a whole new rack — marinated, vacuum-sealed and ready to be cooked at home. It was a gracious response to an understandable mistake, and we accepted.

The flourless chocolate cake ($12), which consisted of cake "coins" rather than a single slab, didn't quite do it for me, mostly because of the ratio of ingredients on the plate. I wished for more decadent chocolate to complement the refreshing cranberry sorbet.

When the apple tarte tatin ($12) arrived, with a dollop of browned-butter ice cream and a web of miso caramel (which reminded me of sea creatures in Japanese anime), we were glad we'd saved room. The crust and the fruit, slathered with melting ice cream, were just the right end to the meal. We washed it down with a small French press of Vermont Coffee brew, fortifying ourselves for the long drive back to Burlington.

In September, when Mangalitsa was still under construction, I walked in to check it out and found Laurendeau sitting at the counter. A few weeks later, I called at about 9 a.m., intending to leave a voicemail requesting a reservation. Laurendeau picked up and took the reservation. When I dined at the restaurant recently, Lombard was working front-of-house, and chef Laurendeau came out of the kitchen to serve some of the food.

Working all hours isn't unusual for new restaurant owners, but the chef's youth makes his dedication seem even more striking. Laurendeau is not about swagger; when complimented, his face lights up with pleasure.

Both business partners seem genuinely concerned with how their patrons are enjoying the fare and service. The environment they've created is upscale enough that it matches the food's quality, but casual enough that anyone can feel comfortable in the dining room.

Knowing that Laurendeau and Lombard previously worked at a place that caters to wealthy patrons' every whim — which is a testament to their skills — the restaurateurs' quiet humility is notable. Mangalitsa, with its petite menu, dedication to local farms and precise culinary technique, is earning a place as one of Vermont's best.