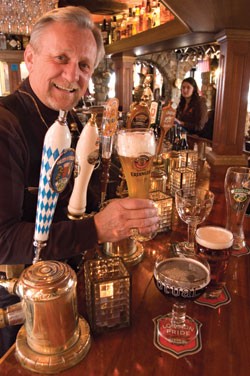 For five years, Sharon Deitz, owner of The Bee’s Knees in Morrisville, had to prepare some food in an apartment above the restaurant and cart it down to her customers. But a recent $100,000 renovation — which also doubled the eatery’s seating — means that everything, from the spinach dip to the “Tex-Mex Chicken Burrito,” can be cooked in a brand-new kitchen right on the premises.

Bucks for the renovation came from loans, donations and the sale of “community-supported” vouchers that can be redeemed for meals.

Along with the roomier digs, The Bee’s Knees also has a new chef: Jeff Egan — formerly of Vermont Discovery Cruises and the Cliff House at Stowe Mountain Resort — is tasked with training back-of-the-house staff and whipping up the cozy comfort food for which the BK is known. One of Egan’s new dinner entrées, pork loin with “wilted spinach, corn spoon bread, crispy shallots and a maple sweet-and-sour sauce,” is already making waves, as is his custardy, spiced “Baked French Toast.”

Although owners Bud and Jason Stevens recently beefed up the menu at Stonecutters Brewhouse in Barre — hiring a new chef and slinging steak dishes and prime rib — they closed the pub’s doors for good last weekend, citing slow business in the Montpelier ’burb. The brothers hope to open a larger location in Chittenden County by the summer.

At Richmond’s Kitchen Table Bistro, Chefs Steve and Lara Atkins are getting back to their neighborhood-eatery roots with a new menu. In addition to entrées such as steak frites and roasted chicken with herb spaetzle, they have loads of filling but more frugal dishes: pork terrine with apple-prune relish, mac ’n’ cheese, and onion soup topped with Thistle Hill Tarentaise, to name a few.

The Scottish poet Robert Burns may be most famous for his claim about “the best-laid plans o’ mice and men,” or perhaps for the misunderstood line that gave its title to The Catcher in the Rye. But on January 25, Burns’ birthday, fans worldwide get together to eat a Scottish meal and read one of the bard’s less well-known works, “An Address to a Haggis.”

At Mr. Pickwick’s at Ye Olde England Inn in Stowe — where “Burns Night” will be celebrated on January 24 — lads and lassies dispense with the poem and get right down to the chow, which includes wild boar ribs, beef Wellington and a haddock-and-potato stew called “Cullen Skink.” Each course is paired with a fine Scotch whisky.

What of haggis, the offal-and-oatmeal concoction Burns called the “chieftain of the puddin’ race”? According to owner Christopher Francis, Mr. Pickwick’s has stopped offering it. “Believe it or not, we couldn’t get people to eat it,” he remarks. Plus, the Scotswoman who prepared the restaurant’s haggis is now chilling with Burns in the Great Beyond. “We couldn’t find a replacement,” he laments. “It has to be made very, very lovingly.”