Responsible Recycling or Digital Pawnshop? Why Vermont Cops Are Worried About ecoATMs 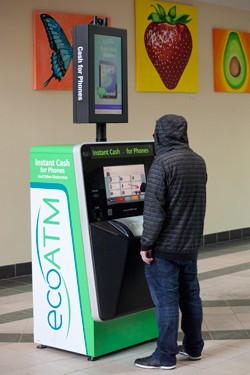 The entrepreneurs behind ecoATM say their kiosks — four of which were installed earlier this year in Chittenden County — are a convenient solution to the problem of consumer electronic waste: You plug your old phone into the machine, which assesses its value and, five minutes later, walk away with cash.

But what’s going on when someone unloads a brand-new iPhone, or regularly sells dozens of devices through the machine?

Along with detectives at the South Burlington PD, Edwards is complaining that ecoATMs are making electronics more tempting to thieves looking for quick cash from around the state. In response, ecoATM says that cellphone theft is nothing new, and the company’s unparalleled security measures often help police catch criminals.

There are currently four ecoATMs in Chittenden County: two in the Burlington Town Center on Church Street and two in the University Mall in South Burlington.

These kiosks appeared in May and June and, while the company isn’t releasing hard numbers, ecoATM spokesman Ryan Kuder says they’ve so far collected “a couple thousand” devices. Nationally, ecoATM is able to pay cash for about 60 percent of the devices it collects. The rest — those deemed worthless — either get recycled or disposed of.

The process is simple: Sellers place their machines in the ATM, which then uses technology to identify the phone make and model. ecoATM then offers the seller a price based on the phone’s resale value and condition.

“We’re first and foremost an environmental solution for people to get rid of their old devices,” says Kuder. “We just don’t want them winding up in landfills.”

And there are a lot of devices to get rid of: Kuder says that Americans purchase between 150 and 170 million new phones every year. “There’s estimates that put the number of phones just sitting around between 300 million and half a billion,” he says.

The San Diego-based ecoATM — which was acquired for a cool $350 million earlier this year by the same company that operates Redbox and Coinstar kiosks — contends that the vast majority of transactions at their kiosks are legitimate: Kuder says just one in roughly 1500 of the devices it collects is later reported lost or stolen.

But South Burlington detective Ron Bliss — who gets reports of all the transactions at the South Burlington ecoATMs — thinks the local number is closer to one in 10. The SBPD received one complaint of a stolen phone from June to November, 2012, compared to the 22 complaints since the ecoATM was installed in June of this year, Bliss says. He and others in the department started worrying as soon as the machines were installed, but it took a few months for cases to start cropping up.

“You offer a service for cash — it’s just too inviting,” says Bliss. “That was our concern, and it’s becoming true.”

South Burlington police have already made at least three arrests involving ecoATMs, and Bliss says he has several more cases on his desk awaiting charges. He estimates he’s worked on solving more than a dozen ecoATM thefts in the last two months, in addition to assisting other police departments in Vermont that have tracked stolen phones to South Burlington.

Some citizens themselves have found their own missing gadgets by using apps like Find My iPhone to track the hot property to the kiosks in the malls.

That was the case in late September, when Bliss helped a Milton resident hunt down his stolen iPhone in the South Burlington mall. In the process of retrieving the phone from the kiosk — it just sits in there until someone from the company collects the contents — Bliss noticed a brand-new iPad mini in the machine that also turned out to be stolen. He traced the serial number to a device lifted from a home on Shelburne Road. When ecoATM turned over the data from the transaction, Bliss arrested Brian Champine on a charge of possession of stolen property. Champine, who later claimed he got the iPad as a gift, had sold it to the machine for $144.

Kuder says that ecoATM has no interest in facilitating crime.

“Every single phone that we collect that turns out to be lost or stolen costs us money,” says Kuder, pointing to the company’s policy of shipping hot devices back — overnight — to police departments. “That’s why we’ve spent the time and the money and the technology … to deter on the front end.”

The kiosks have a few built-in safeguards intended to discourage fencing stolen goods. You have to show a valid ID card and supply a thumb-print to complete a transaction, which an ecoATM employee watches on video, in real time. The machine also makes abundantly clear, through several notices and stickers, that ecoATM collaborates with local law enforcement. That means the company doesn’t ask for a subpoena or warrant before it turns information over to the cops; users have to agree to those terms of service during the course of the sale.

The company can flag individual devices by serial number, so that ecoATM and local police will know if they’re ever sold to one of the kiosks. ecoATM will even blacklist individuals at the request of local police — though that didn’t stop 21-year-old Winooski man Stephen Francis. Police arrested Francis on October 26 for allegedly stealing an iPhone from the lobby of the Anchorage Inn in South Burlington, an act caught on tape by the motel’s security camera.

Francis had already been banned for allegedly using the ecoATM to sell stolen goods on an earlier occasion. So this time, according to the police affidavit, he got the idea to recruit someone else — a woman at the University Mall — to sell a phone to an ecoATM kiosk there. The two allegedly split the proceeds: $60.

Bliss isn’t alone in his concerns about ecoATM and its crime connection. Last month Baltimore’s city council banned the kiosks within city limits, and two Maryland legislators have said they’ll draft a law to take the prohibition statewide. It’s a decision that Kuder says is “incredibly disappointing,” based on misconceptions that users can “pop the phone in the top” of the machine “and it shoots hundred-dollar bills out.”

Unlike Bliss and Edwards, Burlington police chief Mike Schirling isn’t convinced the ecoATMs have caused any uptick in stolen electronics; he says there’s always been a market for those goods. Some were traded directly for drugs, and others went out of state to be sold in larger cities. So far, Schirling says, the Burlington PD has no complaints about ecoATM.

“Their system of checks and balances is unrivaled in the secondhand industry,” says Schirling.

Vermont State Police trooper Benjamin Katz concedes that ecoATM does a better job than most in working with police, but he says the company doesn’t go out of its way to highlight obviously suspicious transactions. The popularity of the machines raises a larger question, says Katz, about the necessity of regulating secondhand sales.

“People steal what they can sell,” says Katz. “They don’t want the product. They want the money for their drug habit.”

Ironically, though, the data from ecoATMs — including video footage, fingerprints and IDs collected during transactions — have the potential to make it easier for police to arrest individuals for possessing stolen goods.

Bliss sees it as a net loss. He wants to see the machines gone — or, at the very least, have stronger safeguards in place. For example, he wants ecoATM to keep its purchased and recycled phones in the state for at least 30 days, in order to give police more time to determine if any stolen goods are among them.

In the meantime, he says that ecoATM cases are taking up about half of his time these days. And it’s not just South Burlington goods he’s uncovering in the kiosks; he’s seeing stolen property from all over the state, which Bliss attributes to the University Mall’s proximity to Interstate 89.

“Unfortunately, the city doesn’t need any more people coming in that are in the process of committing crimes,” says Bliss. “We have enough of our own.”