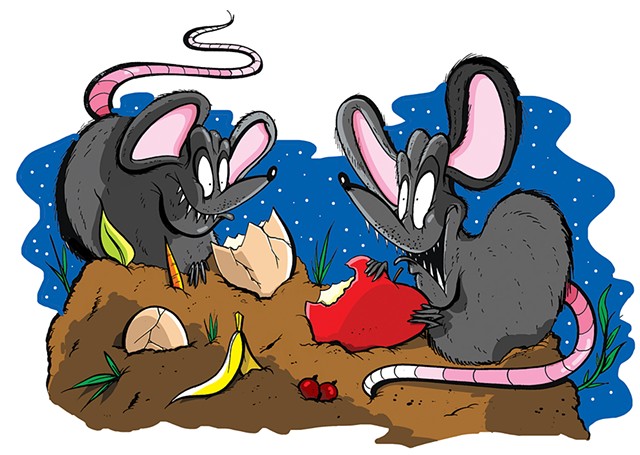 When the weather warms, Mary McGinniss likes to sleep in the airy back room of her Burlington home. It's fairly quiet on Crowley Street, and out back, McGinniss can feel the summer breeze and smell the flowers as she drifts off each night.

One evening in June, McGinniss was awakened by an unmistakable sound. An animal was gnawing on the wood siding, just outside an open window and right next to her head. From the sheer loudness of the chewing, McGinniss could tell this was no ordinary house mouse. It was something bigger.

"I freaked out," McGinniss said, recalling how she fled to her upstairs bedroom. "I said, 'I can't listen to this. It's too creepy.'"

McGinniss isn't the only Old North End resident to have had a recent close encounter with the unwelcome visitors. Since May, more than a dozen people have documented run-ins with rats. Neighbors have reported seeing them scurry into hidey-holes and cavort across lawns in broad daylight. One Washington Street resident trapped 13 in just three days.

City Councilor Joe Magee (P-Ward 3), who represents the affected neighborhood, helped organize a community meeting in June to discuss the problem with city officials, who said that besides one unverified report some years back, they couldn't recall ever getting a complaint about rats in Burlington.

"It certainly makes you take note, because that's a big-city issue, right?" said Patti Wehman, housing division manager for the city's code enforcement office. "And yet, it's been a hot topic this summer. Something's changed, obviously."

Across the globe, reports of rat sightings exploded during the early days of the pandemic as restaurants and other businesses curtailed operations and cut off an easy food source: dumpsters. The trend didn't stop when the lockdown ended. New York City, for one, has reported sightings above pre-pandemic levels, though it's unclear whether the rodent population has actually grown or if people are just paying rats more attention.

Rats are a formidable foe, and Nichols calls them the "athletes of the rodent world." They can shimmy through holes the size of a quarter and stretch their bodies up to a foot long. Their teeth can grind through metal and cinder blocks. Many are smart enough to avoid traps.

"They're amazing animals, and they can do amazing things," Nichols said.

Not everyone shares her reverence for Rodentia. Rats' bad rap dates back nearly seven centuries, when they allegedly first helped spread the bubonic plague. And while some scientists now say humans, not vermin, were the true vectors, the stigma remains. Many Burlingtonians contacted for this story were reluctant to discuss their rat problems. Whispers of an infestation on one street led residents to rat out a neighbor to city officials — though no one had ever actually seen a rat on the neighbor's property.

All the actual sightings have been within a four-block area roughly contained by Convent Square, Manhattan Drive, Ward Street and Lakeview Terrace. City officials and residents believe poor composting practices are to blame.

Vermont banned food scraps from landfills in 2020, requiring property owners to dispose of their organic waste by bringing it to a transfer station, arranging for a pickup service or taking up backyard composting. Bill Ward, Burlington's code enforcement director, said seasoned composters know the drill, but newbies are still getting the hang of proper outdoor disposal, which includes mixing the scraps with leaves or grass clippings in a secure bin.

Officials in Essex Junction also suspect composting is at the root of its recent rat woes. That city is now considering hiring an exterminator to deal with the problem, which surfaced in the spring. In one case, health officer Jerry Firkey said he traced the source of a resident's rat problem to a compost bin and chicken coop next door. The owner couldn't believe she had rats on her property until Firkey showed her a video of one skittering across the lawn.

"We had a meeting, and before we're done, she got rid of the whole compost pile ... she got rid of her chickens, and the rest is history," Firkey said.

Neighbors have reported seeing them scurry into hidey-holes and cavort across lawns in broad daylight. tweet this

Burlington resident Meg Wallace first spotted rats last winter underneath her compost bin on Washington Street. The problem got worse in the spring, when Wallace found that the rats had dragged rotting pieces of food into an outbuilding. Then rats turned up in her cellar, where they chewed through spray foam insulation.

Wallace immediately called an exterminator, who laid out poison bait stations and snap traps. Wallace placed more traps outside, rat-proofed her compost bins with mesh sheeting and blocked every crevice she could find. In the end, she killed 13 rats; there hasn't been a sighting in weeks.

"I think I've made that place fairly inhospitable," Wallace said. "Rats are smart, and they're really cool animals, [but] they don't belong in my fuckin' house."

Despite Wallace's compost problems, she's convinced there's another cause: construction. She pointed to the activity around the former St. Joseph's Orphanage on nearby North Avenue as the likely culprit. Built in the late 19th century, the structure was converted into apartments in 2017 as the centerpiece of the Cambrian Rise neighborhood, which now features several other housing projects on the expansive lot.

Wallace thinks rat nests were disturbed when contractors began their work, which is ongoing. But Ward and Wehman of the code enforcement office have their doubts. If construction were the cause, they think there would have been complaints years ago, when it all began.

But at least one city official believes Wallace's theory. Councilor Magee said his family dealt with rats for a decade in the Boston suburb of Allston. Locals there say development, particularly an expanding Harvard University campus, is driving the infestation. The trend has earned Allston the unfortunate nickname "Rat City."

Magee's relatives tried various ways to eradicate the pests, from strategically deploying mothballs and dryer sheets to stuffing cracks with steel wool. Earlier this month, their rat troubles were finally over — when they sold the house. The new owner plans to demolish it.

Magee wants to keep Burlington's rat problem from worsening, especially as the city considers zoning changes that would allow for denser housing development.

"It's definitely a concern for folks, so it's definitely near the top of my list," he said, adding, "I'm hoping to keep the [community] meetings going for as long as the problem exists."

Ward suggested the city host a forum with the Chittenden Solid Waste District, which handles food scraps, to reinforce proper composting practices, while the city's Board of Health is printing up informational fliers that encourage people to store waste in heavy-duty containers. The city is also cautioning residents to avoid using poisons, in order to keep pets and other wildlife safe.

Nichols, of HEART Wildlife Removal, is trying a new method to reduce the rodent population. One of her staffers is training to use ContraPest, a liquid bait marketed as birth control for rats. The compound works for both male and female rats as soon as it's consumed and is otherwise harmless — including to animals that eat rats. Nichols' company will begin using it this fall.

Meantime, she offered some tips: Keep garbage and yards tidy, and avoid leaving out pet food or other tempting treats. An energy audit can also identify cracks that need sealing, Nichols said.

McGinniss, the Crowley Street homeowner, called Nichols after the gnawing rat disturbed her summertime slumber. She patched the hole in the siding with wire mesh and sprinkled a mix of powdered cayenne and mint around the house. Her two cats, Harry and Johnny, stand sentry. So far, no more rats.

"I'm not convinced that they're not gonna come back or that they're gone," McGinniss conceded. "We are lucky, as far as we know, but this story could change any minute."

The original print version of this article was headlined "Rats!"