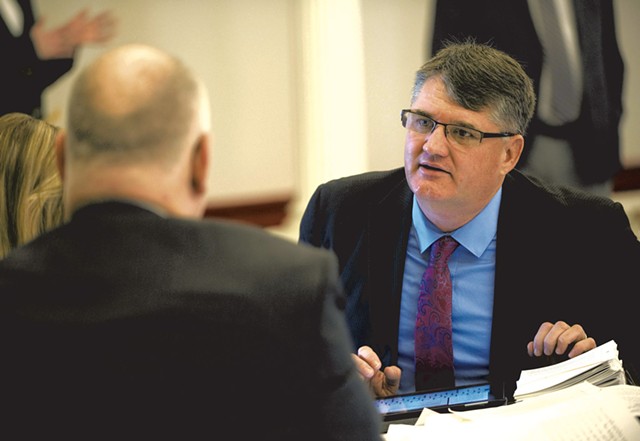 House Minority Leader Don Turner stood on the House floor last Tuesday and delivered a stern message about a 13-cent increase in the cigarette tax that his fellow lawmakers had just approved.

“Day 92 of the session, and yet another tax increase,” the Milton Republican scolded. “Vermonters can’t afford it!”

Republican Carolyn Branagan of Georgia, vice chair of the House Ways and Means Committee, also rose on the House floor that day — to defend the cigarette tax.

“Reducing the number of young people who smoke will lower health care spending,” Branagan said. “This is not a tax, Mr. Speaker. This is a way to make Vermonters healthier.”

Turner fumed at Branagan’s comments. His caucus is too small to pass or defeat legislation on the House floor. But Turner can hone a very clear election-year message to voters: that Republicans staunchly oppose the actions of a Democratic majority that is taxing and spending the state into despair.

His caucus members muddy that message, Turner said, when they defend a tax increase or higher spending.

“I get very frustrated,” said Turner, who sometimes loses his temper with fellow Republicans. “The caucus voted on its priorities. I’m just trying to make sure they don’t lose sight of what those priorities are.”

A lifelong resident of solidly middle-class Milton, 51-year-old Turner said he hears a constant stream of complaints about rising taxes back home.

But from January through May in Montpelier, where he’s in his sixth year as House minority leader, Turner has trouble convincing some of his members to heed that message.

It’s not easy being leader of a 53-member Republican caucus in a 150-member chamber dominated by Democrats who have a like-minded governor down the hall.

“It’s a thankless job,” said Rep. Patti Komline (R-Dorset), who held the position from 2009 to 2010, when Republicans were in the minority but held the governor’s office. “It’s an even more thankless job now.”

Turner didn’t need to take on the role of minority leader. He’s got a long list of other responsibilities. The married father of three daughters is Milton’s full-time paid fire and rescue chief, a real estate broker, a housing developer, and an apartment manager.

Last Saturday night, he was at the scene of a road fatality from 10 p.m. to 3 a.m. On Sunday afternoon, he had two appointments to list homes for sale. Tuesday through Friday from January to May, he packs fire/rescue and real estate work into his mornings and evenings while he spends his days at the Statehouse.

Though he’s long been active in Milton organizations and was vice president of his Milton High School class, Turner didn’t show much interest in politics before 2006. He’d never served on a local municipal board, and had no plans to run for the legislature, when Republican governor Jim Douglas asked if he was interested in filling a House seat left vacant by a midterm resignation.

The magic words, apparently. Turner won the appointment and has been elected to the seat five times since.

The minority leadership fell to Turner almost by default. He was unopposed when House Republicans elected him to the post in 2011. Komline had grown tired of trying to hold together a band of members who range from almost liberal to staunchly conservative.

Back home in Milton, Turner’s jobs generate concrete results. He puts out a fire, saves an accident victim, sells or builds a house. But in Montpelier, success and failure are less well-defined, particularly for a member of the minority party.

Affable, earnest and eager to please, Turner came to the post without a wide grasp of public policy or public speaking. He’s learned on the job.

Colleagues say he has become better at shaping his party’s message, more confident in challenging the Democratic majority, and more adept at recruiting and training candidates. Last year, he helped his party gain eight seats in the House.

“He was like anybody who was brand-new. He was tentative. He was nervous,” said Rep. Patrick Brennan (R-Colchester). “He’s come full circle. He knows the issues. He knows what his caucus wants.”

Turner said he learned after his first few years that the caucus couldn’t tackle every bill that reaches the floor. “We had no coherent focus,” he said.

So he and other caucus leaders decided to leave social issues up to individual members while the group invests its energy in holding the line on fiscal issues.

“He has the caucus focused on issues important to Vermonters,” said Rep. Kurt Wright (R-Burlington).

Despite that agreement on the big picture, Turner continues to struggle to convince some members — at times including Brennan and Wright — to stand up against specific new taxes and spending.

And the tongue-lashings he unleashes on members in an attempt to bring them in line have discouraged some GOP colleagues from regularly attending caucus meetings.

“There are times he lets his temper get the best of him,” said Wright, who has been on the receiving end of Turner’s anger. “I understand the frustration. It’s how you deal with the frustration.”

As Wright tried to explain an education bill to the caucus earlier this year, he said, Turner launched into a series of objections. “I finally had to say, ‘Don, if you want me to explain it, you have to let me speak.’”

Some of Turner’s private rebukes come laced with profanity, but Brennan said he doesn’t take offense. “That’s his role,” Brennan said. “He’ll come to me and apologize before he reams me out,” he said before reconsidering that word: “He didn’t ream me out.”

Delivering an apology ahead of a tongue-lashing is typical Turner. He’s Sunday-school polite mixed with barroom brusque.

Turner said his job is to remind members to stick to the priorities they set at the start of the year. “I do vent my frustrations,” Turner said. “I think I have every right to vent them.”

“It’s like coaching,” he said, drawing the analogy of a basketball coach getting in his players’ faces at halftime. “It’s tough love.”

Skipping lunch one day last week to talk to a reporter, Turner reached into his suit jacket pocket for a Quaker Chewy granola bar while he pondered the question of why he stays in the job.

“I like to help people,” he said. “The path we’re on with this taxing and spending, I don’t think it’s good for Vermont. People in this building think government is everything to everybody forever.”

Building a better path is harder, however.

Last month, as the House voted on a $5.77 billion state budget, Turner objected to the 4.4 percent increase in the General Fund, declaring it should rise no more than 2.2 percent.

But only one of the four Republicans on the House Appropriations Committee voted against the budget. And on the House floor, the bill breezed through on a 94-40 vote with about a dozen Republicans voting yes.

The next day, Turner held a press conference to denounce the increases. House Appropriations Committee chair Mitzi Johnson (D-South Hero) had disregarded a host of Republican ideas that would have cut spending, he claimed.

“If I were in Mitzi’s chair, we would do it without the increase in taxes,” Turner declared.

Asked what he would cut from the budget, Turner produced a list of Republican members’ bills that had been ignored. They included moving the state’s Vermont Health Connect to the federal exchange, which Democrats dispute will be less expensive.

Johnson said Turner and his members had ample opportunity to bring specific ideas to the budget committee. “I didn’t get anything,” she said.

“It’s easy to criticize. It’s hard to provide alternatives,” said House Speaker Shap Smith (D-Morristown). “He and his caucus did not put numbers on the table that would have done what they want to do.”

Turner acknowledged it’s difficult for a minority party, with no staff, to sketch out its own budget. But if Republicans were in control, he said, they would base the budget on different priorities — public safety, education, economic development and taking care of the most vulnerable. When asked what would have to fall by the wayside, he was less specific.

“We’ve got very generous benefits,” he said, unwilling to identify which ones he would reduce. “I would say every committee should not look at anything new until they scour every program.”

According to Turner, every time Republicans vote for a tax or budget increase, they undermine their party’s argument that Democrats are harming the state.

In committee after committee, members see it differently, as Branagan did with the cigarette tax.

Branagan said she can exert more influence by working in committee than by simply voting against every tax. “He doesn’t realize how many taxes I get rid of every year,” she said, referring to the way she speaks out as No. 2 on the budget-writing House Ways and Means Committee.

Brennan, chair of the House Transportation Committee, backed $10 million in new motor vehicle fees that he considers necessary to run the Agency of Transportation. Turner lit into him in a Statehouse hallway.

In the House Judiciary Committee, four Republicans backed a proposal to forgive some highway fines, forcing lawmakers to make up for $850,000 in lost revenues. “Where does it stop?” Turner lectured in a Republican caucus meeting. “You’ve got to ask the tough questions.”

After the session ends next month, Turner will turn his focus to the November elections, trying to persuade voters that Republicans were the ones asking tough questions as the Democratic majority raised taxes.

Ever the optimist, he insisted that public sentiment against the rising cost of government is growing, and candidate recruitment is strong. “More people are seeing the results of one-party rule,” he said.

Rep. Paul Dame (R-Essex Junction) credited Turner for recruiting him to run for the House and sticking with him after he lost in 2012. Turner’s hold-the-line-on-spending message and the team he created to train candidates helped Dame defeat an incumbent Democrat in 2014, he said.

“We had a good affordability message,” Dame said. “It really resonated.”

But Turner acknowledged that 2016 is a presidential election year likely to generate strong Democratic voter turnout in Vermont. “It’s going to be a tough election,” he said.

He harbors no illusions that Republicans are positioned to regain the House majority they last held in 2004. His goal is simply to build a stronger team.

“I don’t see myself here a lot longer,” Turner said. “My biggest hope is, the caucus will be better when I’m done.”