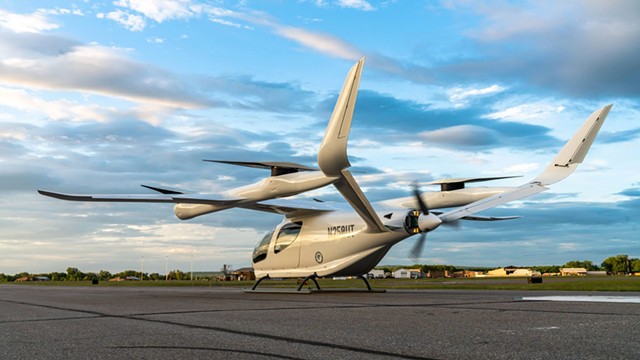 About $600 million in capital flowed into the state, including $368 million to Beta, $140 million to Polly, and $17 million to the lesser-known SuperPlastic, a Burlington-based toy and entertainment company. That's well above the 2020 figure of $106 million.

The year-over-year percentage increase is the largest in the country, said Cairn Cross, cofounder of Fresh Tracks Capital, who creates an informal report each year on investment funding in the state. Nine of the 38 deals last year were with companies based outside Chittenden County, he said.

Related DealerPolicy to Expand in Williston With $110 Million Infusion

While Cross acknowledged that the three large investments last year are anomalies, he thinks there has been a shift in Vermont’s entrepreneurial community that will lead to further increases in both the number and size of deals in coming years.

“Vermont companies are looking for scale-up potential, and quickly,” he said. “To do that, they’re going to get outside capital.”

It's clear Vermont’s tech economy is growing. A report  that the Vermont Technology Alliance released Monday says Vermont ranked first in the nation for the percentage increase in new technology businesses in 2021. The report, based on data from the nonprofit IT association CompTIA, counted 15,961 tech jobs in Vermont last year, with an average salary of $76,943. Vermont’s mean wage in 2021 was $55,000, according to the state Department of Labor.

Related Ready for Takeoff: Beta Plans to Manufacture Its Electric Planes at BTV

Ready for Takeoff: Beta Plans to Manufacture Its Electric Planes at BTV
By Derek Brouwer
Off Message
The fundraising numbers that Fresh Tracks released for 2021 illustrate a sharp increase that started in 2019, when deal values hit $100 million. In the decade from 2011 through 2020, Vermont companies took in $568 million in venture capital deals — less than the total raised in 2021 alone.

The sharp increase in Vermont might reflect some large shifts nationally and globally. Even before the pandemic started, remote-work technology was making it easier for investors far from Burlington to learn about Vermont companies and their founders.

Remote investing activity accelerated during the pandemic, which provided an advantage to Vermont companies looking for out-of-state capital. Also, technology companies have shown greater interest in smaller cities in recent years as the traditional tech centers such as San Francisco became increasingly difficult  places to live.

The share of early stage venture capital dollars going to companies outside the Bay Area has increased from 60 percent to 70 percent in the last eight years, according to a report from the Washington, D.C., research nonprofit Brookings.

“The amount of dollars that translates to is huge,” Cross said.

The impact of that trend is apparent in Vermont, said Cassidy Petit, who works in business development for the Fund at Hula, a business accelerator and venture capital fund. The Fund at Hula invested in 10 Vermont-based companies last year, she said.

All this means that Vermont’s sky-high 2021 numbers aren’t necessarily a one-time phenomenon, Cross said. The San Francisco venture fund Initialized surveyed company founders in 2021 and found 42 percent would prefer to launch any new business through remote or distributed work.

“We’re at the forefront of it,” Petit said. “We’re building community with outside markets. From my seat at Hula, we’re seeing an influx of remote workers and well-connected people who have come from New York, and love Vermont, and want to engage in the Vermont ecosystem.”

“What is really important to me is the number of transactions keeps going up,” said Cross, noting that there were 38 investments in 2021 in 34 companies — more than triple the 2012 figure of 12. “I believe by 2025, you’re going to see 50 transactions a year in Vermont, and it’s going to continue to steadily increase.”

A New Investment Fund Seeks to Spur Vermont's Startups
By Anne Wallace Allen
Business
Many in the economic development and investment community in Vermont would like to see growth in mid-stage investment. To that end, private equity investor Jim Crook and four associates this year launched the Dudley Fund, which aims to inject $12.5 million into those early and mid-stage companies.

Despite the prominence of the large deals with Beta, Polly and Superplastic, the most active category for investment last year in Vermont was in food, beverages, consumer goods and adult beverages. The report included three companies that used so-called "regulation crowdfunding": Piecemeal Pies in White River Junction, Shacksbury Cider in Vergennes, and Tost, a Dorset company that makes sparkling non-alcoholic beverages. Reg CF, as this fundraising is known, lets companies raise up to $5 million by selling securities, such as debt, within a 12-month period.

A growing tech economy such as the one in Chittenden County often starts with spin-offs from local universities and tech companies that have drawn highly skilled workers to an area. Beta, Polly and many other companies are attracting those workers now, said Petit, who added she knows of some other deals that will be closing this spring.

“With the activity I expect in this quarter, I think that growth rate, halfway through this year, will be close to 800 percent since February 2020,” Petit said. “And we’ll continue to observe that trend over subsequent years, because success attracts success.”

Clarification, April 5, 2022: The Securities and Exchange Commission data included $58 million that Beta says it raised before 2021. This story has been updated to reflect the adjusted number: $368 million.