Report From the GMFF Film Slam 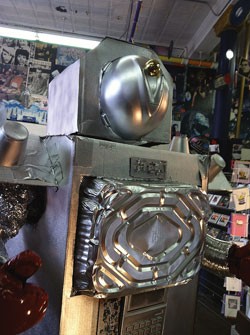 The demise of 35-millimeter film was barely mentioned at this year’s Academy Awards ceremony, but it was front and center at last weekend’s Green Mountain Film Festival 48-Hour Film Slam. The 10 teams competing not only had to make a roughly seven-minute film in 48 hours, they also had to use an old-school film reel as a prop. (The other required elements were Montpelier’s Dairy Creme as a location and the line “Is this your idea of a good time?”)

On Sunday, when the 48 frenetic hours were over, the exhausted teams presented their films to a sold-out crowd at Montpelier’s Pavilion Auditorium.

One team went to town with its film reel and produced “The Replacement,” directed by Sequana Skye, in which the slinky celluloid goes rogue and becomes a horror-movie monster — as revenge for its obsolescence, perhaps? The second-place winners made their reel the centerpiece of “Overexposure,” a thriller about a missing boy with a fondness for filmmaking.

But the judges — who included this writer — gave the first prize of $1000 to the one-of-a-kind sports comedy from artist-filmmaker Drew Peberdy of White River Junction and his teammates. “The Hard Reboot” concerns a tin-foil robot named Beat-Bot that’s supposed to fight but would rather dance the night away. Wouldn’t we all?