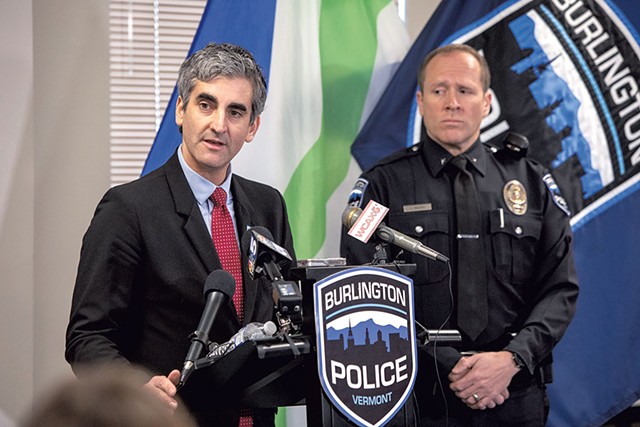 The Burlington Police Department could benefit from more robust civilian oversight, according to a draft independent assessment of the department obtained by Seven Days last week. The report was delivered to city officials nearly nine months after Mayor Miro Weinberger vetoed a proposal that would have provided exactly that.

Compiled by CNA, a Virginia-based nonprofit, the 168-page assessment says that a "Citizen Review Board" should examine the Burlington Police Department's internal and external investigations. The chief, the report says, should no longer "serve as the final authority on facts and discipline."

The recommendation, among 151 that CNA provided in the draft document, is markedly similar to a proposal from Burlington City Council Progressives late last year that would have created an "independent community control board" for additional police oversight. The board could have suspended, demoted or even fired cops for misconduct without the police chief's approval — which would have required changing a provision in the city charter that gives the chief the sole authority to discipline officers. Mayor Weinberger vetoed the resolution on New Year's Eve, instead proposing that the existing Burlington Police Commission be given more authority.

A joint committee of city councilors and police commissioners selected CNA in January to perform a wholesale review of the Burlington police department. tweet this

The CNA report also supports Weinberger's position that the police commission should have more power. But its call for a separate citizen board — one that can overrule the chief — represents a victory for advocates who have been pushing for such a level of oversight for months.

"It would be one of the best decisions we could make," Councilor Jane Stromberg (P-Ward 8) said. "More community input and involvement in conduct and having that separate entity," she said, is vital.

A joint committee of city councilors and police commissioners selected CNA in January to perform a wholesale review of the Burlington Police Department, which has been the subject of public scrutiny since incidents of alleged excessive force came to light and spurred a monthlong protest in Battery Park last summer. Besides oversight, the report recommends that the department have 76 to 83 officers on staff — a proposal likely to be debated — and found evidence of racial bias in police practices and serious deficiencies in officer training. City officials received the draft report last week.

Aspects of the report could change. For instance, Seven Days discovered that one section on police oversight confuses Burlington, N.C., with the Queen City. Because of the possibility of similar errors — and because the document is a draft — Mayor Weinberger has declined to comment on the report, said his spokesperson, Samantha Sheehan. In an email, she said she also has "serious concerns" about Seven Days' reporting on the draft report.

Doing so, she wrote, "puts the Administration in an impossible position in trying to work with you to ensure the public is correctly informed of the valuable conclusions in CNAs [sic] final operational assessment that will certainly be deliberated on in the weeks and months ahead."

In an emailed statement, Weinberger said racial justice and equity are top priorities in the city and that he looks forward to "leading additional reforms" when the assessment is complete.

CNA's draft devotes considerable space to citizen oversight and "quality control" of internal investigations. It found that the department collects "relatively little" information about officer complaints and says the data it does collect is recorded in an Excel spreadsheet, "a rudimentary form of holding important data."

Having the police chief decide whether to investigate certain complaints — and then adjudicate them — "puts him or her in a difficult position," the report says.

Rather, the CNA team recommends several layers of review. A new internal police disciplinary board would look at complaints and suggest discipline to the chief, who could agree or disagree with its findings. The Citizen Review Board would examine cases to ensure "a consistent and fair" process, the report says.

"Often police chiefs think a [citizen review board] takes power and responsibility from the chief, but it can also increase the credibility of the chief's decisions," CNA wrote.

Acting Police Chief Jon Murad did not reply to an interview request, nor did Councilor Perri Freeman (P-Central District), who led the community control board effort; Councilor Zoraya Hightower (P-Ward 1), who serves on the joint committee; or Cpl. Tyler Badeau, the president of the Burlington Police Officers' Association. Several other city councilors declined to comment because they hadn't yet read the assessment.

Stromberg, who serves on the council's Public Safety Committee, said the report corroborates concerns about a lack of oversight and lends credence to the idea of a control board, a proposal she supported last year.

"The Burlington Police Department clearly has issues the way things are. I think it's wise to at least try something new to see if we can have less conflicts of interest," she said. "Having a separate group to make those types of disciplinary decisions and investigatory decisions is going to be a really positive thing for policing."

The council's Public Safety Committee has been vetting a resolution that would give police commissioners "full and unfettered access" to documentation of complaints and allow the body to hire its own investigator "to conduct or review allegations of serious conduct or harm," among other roles. The proposal asks for $25,000 from the city's unassigned fund balance to cover any legal costs. The bipartisan committee approved the resolution earlier this month.

The full council was expected to consider the measure at its September 27 meeting, but Councilor Karen Paul (D-Ward 6), the committee chair, has suggested postponing the discussion.

"We are all still committed to the resolution but want to be sure we are incorporating [CNA's recommendations] to be as complete as we can be," Paul said in a text message to Seven Days on Monday.

Stromberg said she supports giving the police commission more power, regardless of the control board idea. "I do want something to change," she said, but "I'm always open to pushing things more."

A separate grassroots effort is attempting just that. A group called People for Police Accountability has been circulating a petition to place the control board proposal on a future city ballot. The effort is supported by the Battery Park Movement, the group that occupied the city green space last summer, demanding that the city fire three cops involved in alleged acts of excessive force; one officer, sergeant Jason Bellavance, ultimately took a $300,000 payout and resigned from the department.

Activists have hosted petition drives at locations around the city. If they collect signatures from 5 percent of registered voters — or about 1,686 people — the item would be added to a future city ballot. City councilors cannot reject ballot questions that would change the charter, as this one would, according to assistant city clerk Amy Bovee.

The group did not respond to a request for comment.

Mark Hughes, a former police commissioner, is the coordinator for the Vermont Racial Justice Alliance, an advocacy group whose platform Operation Phoenix R.I.S.E. calls for public safety reform, including more citizen oversight. Hughes has helped distribute the control board petition because he doesn't believe the police chief should have the final say in officer discipline.

"It's one of the first documents that shows, Here's an issue, and here's how to fix it." Jabulani Gamache tweet this

After the mayor's veto of the police oversight proposal, members of the city's police commission decided to conduct their own research. The group recently participated in a four-day training with the National Association for Civilian Oversight of Law Enforcement, which laid out principles for effective oversight and different oversight models, as well as explained how to conduct investigations.

Earlier this year, commissioners proposed a new policy aimed at creating more transparency at the police department. It would require the department to disclose officers' disciplinary records in response to public records requests, with some caveats; to post monthly summary reports of all citizen complaints on the city website; and to issue press releases 10 days after internal investigations are concluded, among other changes. The city attorney's office is still reviewing the policy.

Police Commission chair Jabulani Gamache, who wrote the policy draft, said he thinks the police union contract would allow such changes; other recommendations in CNA's report may violate the contract, which is in effect until June 2022. Regardless, Gamache said he hopes the report will prompt conversations about how to increase oversight in Burlington.

"It's one of the first documents that shows, Here's an issue, and here's how to fix it," he said. "As of right now, I think this report does a very good job of showing how to get these things done."

The original print version of this article was headlined "New Sheriff in Town?"