Renowned Modernist House in Hardwick Is Up for Sale 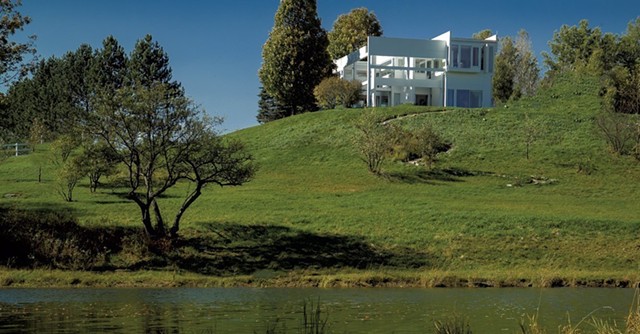 You never know what you'll find while driving along the back roads of rural Vermont. But perhaps the last thing you'd expect to stumble across is a world-renowned example of modernist architecture, built in 1969 outside of Hardwick village. Accessed via a gravel road bordered by manufactured homes, the building known as "House II" appears to have dropped from the sky onto a grassy hilltop. The stark, white, glass-walled cubic form overlooks a rolling landscape of fields, trees and mountains.

Architectural historians Glenn Andres and Curtis Johnson describe House II as "one of the most famous houses of modernism" in their 2013 book Buildings of Vermont. The home was featured in a 1972 exhibition at New York's Museum of Modern Art, and images of it have been published internationally in architecture and design magazines.

Also known as the "Falk House" — for Richard and Florence Falk, who commissioned its design and construction — House II is the first freestanding building designed by renowned architect Peter Eisenman (born in 1932). Today, his designs for buildings such as the Wexner Center for the Arts in Columbus, Ohio, the City of Culture of Galicia in Spain and the University of Phoenix Stadium in Arizona have cemented his reputation as one of architecture's foremost designers and theoreticians.

House II in Hardwick is where it all began, when the Falks asked Eisenman to design a home for their young family on a former dairy farm. But, despite its legacy, the building now faces an uncertain future. Its current owners are ready to move on, and the house is for sale.

At the time of the commission, Eisenman's work had been purely conceptual in nature, existing only in diagrams and text as opposed to actual built structures. In the late '60s, he began designing a series of 10 houses and became associated with fellow architects Michael Graves, Richard Meier, Charles Gwathmey and John Hejduk — collectively known as the "New York Five." Only four of the 10 houses in Eisenman's series were ever built, including House II.

In the case of House II, a cubic volume is divided into nine squares, from which 16 square supporting columns are derived. A diagonal shift within the cubic volume establishes the location of the walls, creating a layered space in which solids and voids express the underlying geometry. House II challenges conventional thoughts about the role and meaning of domestic architecture, often at the expense of functional space. The result is a structure in which interior spaces flow not only from room to room but between floor levels and from interior to exterior. 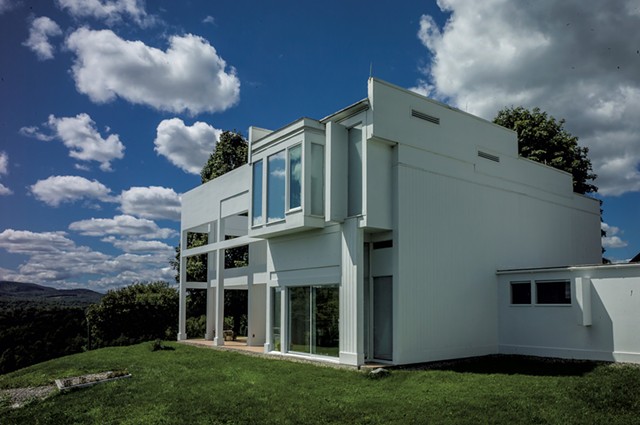 Practically speaking, the Falks found House II to be challenging to live in: Walls between bedrooms stopped short of the ceiling; openings in the floors between the first and second stories were a hazard for their young son; stairs led to small, unusable spaces. While the house was still under construction, the Falks fired Eisenman and hired a local contractor to complete the project. They put House II up for sale in the early '90s. It sat on the market for 10 years, unoccupied and falling apart.

An unlikely savior appeared in 2000, when John and Lydia Makau purchased the home and began a restoration project based on Eisenman's original plans. Over the past 17 years, the Makaus have painstakingly undertaken the rehabilitation, care and maintenance of House II, and have opened it countless times to curious visitors asking for a tour.

While the Makaus delight in sharing House II with others, they are now ready to turn over responsibility for its care and oversight — preferably to someone who is equally enamored of it.

The preservation and use of House II would afford continued opportunities to experience firsthand the architectural ideas of Eisenman and to understand the theories behind his work and the deconstructivist movement. Beyond such considerations, however, House II is simply a fascinating work of architecture in a beautiful setting — with, as its Zillow listing notes, 80 acres, a pond, a barn and studio/guest quarters.

One potential buyer of the property wants to demolish House II and build something new in its place, which would be a sad end for this challenging and groundbreaking building. Alternatively, if the new owner maintained its sculptural presence in the landscape, House II could complement new construction elsewhere on the property and serve as guest quarters or a freestanding pavilion. Vermont's architectural community hopes that, at the very least, House II might be allowed to inspire for many years to come.

Devin Colman is the state architectural historian in the Division for Historic Preservation.