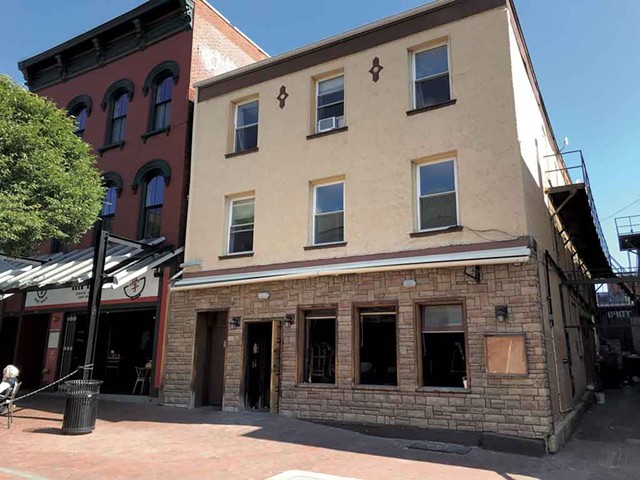 Demolition started last week in the restaurant space at 148 Church Street in Burlington, a building best known as the longtime home of the Rusty Scuffer.

More recently, the building across from city hall housed Scuffer Tap & Table, which closed for business a year ago. Now the building's owner, Mike Williams, is having work done, including the construction of new walls, floor and ceiling and the removal of the bar in the dining area.

Williams, who also owns Kountry Kart Deli at 155 Main Street, said the plan is to create a blank space for a future business owner to design and build. The restaurant seats 86 people, with a seasonal patio that accommodates about 50 more.

"A new proprietor can do what they need to do with the space to make it as beautiful as they want it to be," Williams said.

Two restaurant businesses have expressed interest in the space. One is a Mediterranean restaurant whose Boston-area owner "has years of experience," Williams said. The other is a vegan restaurant group, Copper Branch, based in Montréal.

The mission of Copper Branch, according to its website, is "to empower, energize and make people feel their best. Serving our community whole foods, plant-based, good for you and our planet." Efforts by Seven Days to reach Copper Branch by telephone were unsuccessful.

The new space, which can be built out to accommodate a proprietor's needs, presents a "different vision," Williams said, "rather than have people come in and see the 30-odd years of being a Scuffer."

Williams owned his restaurant in the building, Scuffer Steak and Ale House, until 2012. He expects to have a new tenant in the space by the beginning of 2020. Stay tuned.