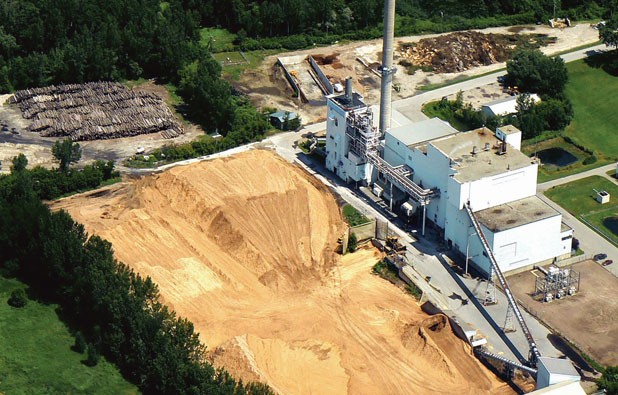 According to the permit, the power plant and accompanying wood-pellet manufacturing facility would annually belch out 470,900 tons of carbon dioxide, methane and nitrous oxide — all of which are considered climate-altering gases. The provisional permit was issued the same week Gov. Peter Shumlin released his vision for Vermont’s energy future, a plan that calls for cutting greenhouse gas emissions in Vermont by moving aggressively toward renewable power — including another 50 megawatts of biomass electricity.

Both the air permit and the Shumlin energy plan are currently open to public comment. Only after a final decision is rendered on the biomass plant can citizens appeal it.

Proponents of biomass energy argue that wood-fired power is a cleaner and more renewable source of electricity than fossil fuels such as coal. Burning wood releases stored carbon that would be emitted anyway when a tree decomposes, the argument goes, and thinning forests for wood-chip fuel can allow younger trees to grow faster and capture more carbon.

But biomass foes are throwing cold water on that theory, pointing to a 2010 study by the Manomet Center for Conservation Sciences that suggested pollution from biomass is actually worse than coal — at least for a period of several decades. Chris Matera of Massachusetts Forest Watch, an advocacy organization whose mission is to protect public forests in New England, says the Manomet study found that biomass plants would release 3 percent more greenhouse gas emissions than coal for 40 years before regrown forests started repaying that “carbon debt.”

“From a carbon perspective, burning trees is the worst thing you can do,” Matera says, adding that he also opposes coal power.

Beaver Wood Energy’s managing director for engineering and construction, Bill Bousquet, dismisses the Manomet study as “trash,” noting the study’s authors published a follow-up document seeking to clarify and contextualize the report’s findings. He says the Fair Haven plant will be among the cleanest-burning biomass plants in the U.S. “The Vermont Agency [of Natural Resources] looks at all the plants that have been permitted in the United States, and they force us to be lower than that,” he says. “So we’re clean. We’re very clean.”

While most scientists agree that biomass power plants emit substantial quantities of greenhouse gases, there’s less consensus over how quickly forests reabsorb it. ANR Deputy Secretary Chris Recchia says it depends on how the forest is managed, how much wood is harvested, tree species and age, as well as other factors.

“There’s a bunch of ways people account for this, and I don’t think an agreed-upon method for carbon accounting has been arrived at yet,” says Recchia, who previously ran the Montpelier-based Biomass Energy Resource Center. “In the old days, two or three years ago, people would say, ‘It’s carbon neutral. We don’t need to count the emissions.’ Well, that’s not true. But I don’t think it’s fair to say it’s worse than coal.”

“Clearing or cutting forests for energy, either to burn trees directly in power plants or to replace forests with bioenergy crops, has the net effect of releasing otherwise sequestered carbon into the atmosphere, just like the extraction and burning of fossil fuels,” the scientists wrote. “That creates a carbon debt, may reduce ongoing carbon uptake by the forest, and as a result may increase net greenhouse gas emissions for an extended time period and thereby undercut greenhouse gas reductions needed over the next several decades.”

Beaver Wood Energy says it doesn’t intend to clear-cut. Walking the future site of the Fair Haven plant, a field overgrown with poison parsnip, Beaver Wood’s Bousquet explains that the plant won’t burn whole tree trunks — only the treetops and branches that would normally be left behind by those harvesting timber for lumber and pulp.

“We don’t want to take any additional trees,” Bousquet says. “We want to take tops and branches they would normally leave in the forest.”

Firing the plant around the clock will require 362,000 tons of green wood-chip fuel per year, which Beaver Wood Energy intends to harvest within a 50-mile radius of the plant. ANR’s Recchia says it’s “theoretically possible” to harvest that much in treetops and limbs, but adds, “I’m not sure you could do that in a market where nobody’s building a new house and all the pulp mills are overseas.”

Beaver Wood has shelved plans for a second biomass plant it intended to build in the southern Vermont town of Pownal, where residents raised questions about a string of air-quality violations the developer incurred at power plants it once owned in Maine.

Fair Haven has been more welcoming. In March, town officials met with the governor and delivered a petition in support of the project that was signed by almost 400 of the town’s roughly 3000 residents. If it gets built, Beaver Wood would become Fair Haven’s largest taxpayer, pumping somewhere around $1 million into local coffers and paying an estimated $4 million in state taxes. Building the plant would create hundreds of temporary construction jobs, according to the developers, and 50 full-time positions in the power plant and pellet-making facility.

Fair Haven could use the jobs. This month, one of its largest employers, manufactured-housing builder Skyline, will close its doors, leaving some 70 people out of work. Town officials hope the plant would jump-start the forest-products industry, too, creating demand in a sector that’s been even harder hit than Vermont’s struggling dairy farms.

“This is the first thing to build here in 50 years,” says Claire Stanley, a retired school secretary and Fair Haven selectboard member.

“I’ve been to Burlington several times. It’s a beautiful city,” Hathaway says. “I just don’t see the impacts on Burlington.”