Remembering 'Out of Vermont Kitchens' Cookbook 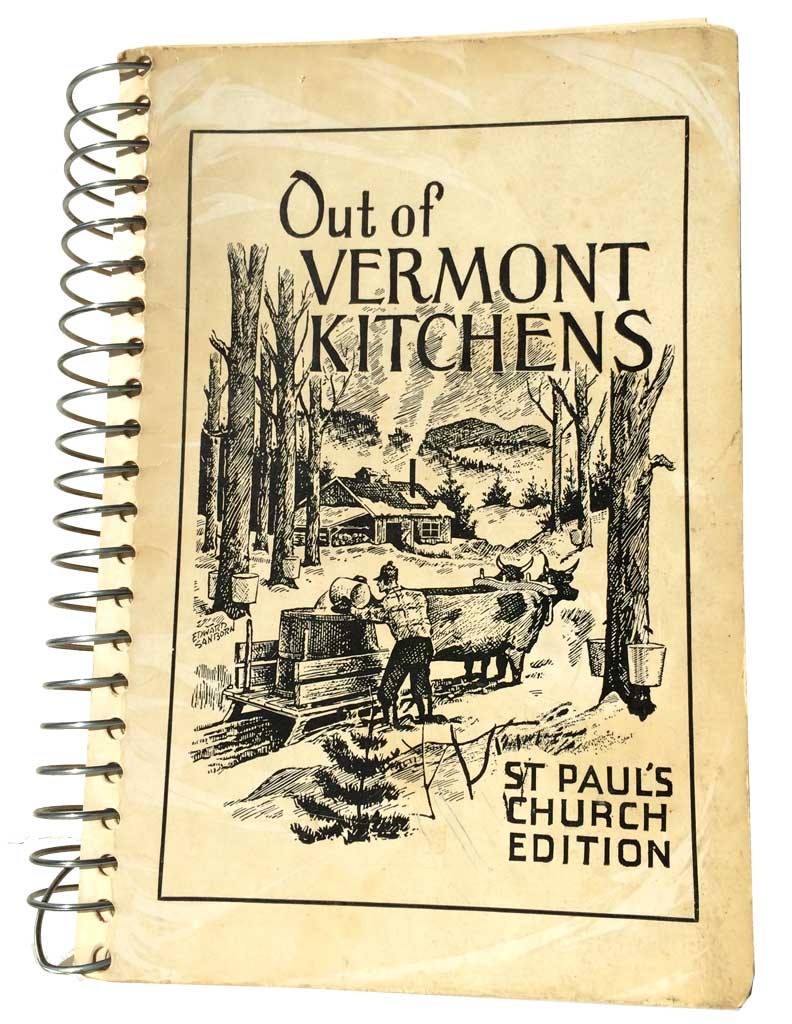 In 1939, Burlington's Cathedral Church of St. Paul solicited recipes from its female parishioners for a cookbook. Among those who responded was Marion Brown, who accompanied her handwritten recipe for orange cake with an illustration of an orange slice. Her family recipe called for baking a plain cake, then pouring orange juice over it for flavor and moisture.

"I didn't expect to live this long," says Marion Thorpe, née Brown, as she recalls that recipe today. At 98, she is one of the few living locals who remember the first edition of St. Paul's Out of Vermont Kitchens. The local-cooking staple, which reproduces recipes in the parishioners' handwriting, is currently celebrating its 75th year in print.

Thorpe's voice is strong, with no hint of a quaver. She lives on her own and still cooks for herself, though she says she doesn't turn down an occasional offer of soup from neighbors.

In her younger years, Thorpe was assistant state supervisor for home economics. She got her master's degree in administration and didn't marry until she was 66, when her widowed neighbor, Norm Thorpe, proposed. "I climbed over the fence, and he said he was in love with me," Marion Thorpe recalls.

Now Thorpe is on her own again, but St. Paul's on Burlington's Cherry Street has remained a constant in her life. And, for many traditional local cooks, Out of Vermont Kitchens has been a constant, too.

Today, Alice Rouleau, the church's treasurer, is in charge of distributing the book. She says that in 1939, St. Paul's joined forces with Trinity Episcopal Church of Rutland on the project. "Both of them really needed all the money they could produce at the end of the Depression," Rouleau explains.

Sales were good and, according to Rouleau, the book became a standard in local homes. In 1951, the church put out a new edition with more Burlington-sourced recipes to replace ones from Trinity. Publication was funded primarily by ads in the back of the book. They touted now-bygone businesses such as Kenwood Dairy Bar on Shelburne Road and Kieslich's Market on North Avenue, which boasted "housemade sauerkraut, brisket and corned beef."

Now without ads, the 1951 edition of Kitchens is still printed by Queen City Printers and distributed all over the state to bookstores and gift shops. It's a quirky novelty, complete with cutesy drawings of Camel's Hump and a quote from Calvin Coolidge. For more modern cooks, the church has released an updated version called Vermont Kitchens Revisited, in which the recipes are printed and refined. "A little bit more attention is given to good nutrition and not so much to butter and cream," Rouleau says.

Thorpe's orange cake recipe never made it into the book. Still, she sometimes leafs through Kitchens to remember the women she knew in years past. "Many of them are gone now," she says with a hint of regret.

But their recipes live on. The dishes range from refined beef in red wine to long-marinated sauerbraten (the latter in a segregated section labeled "Men's Recipes") to dishes that would now be unheard of, such as the "Christmas Salad," consisting of lemon Jell-O filled with cranberry, "nut meats" and celery. All are tastes of times and places now long gone.

We talked to the families of some of the 1951 contributors to learn about the women behind the recipes, the perfect handwriting and the adorable illustrations. 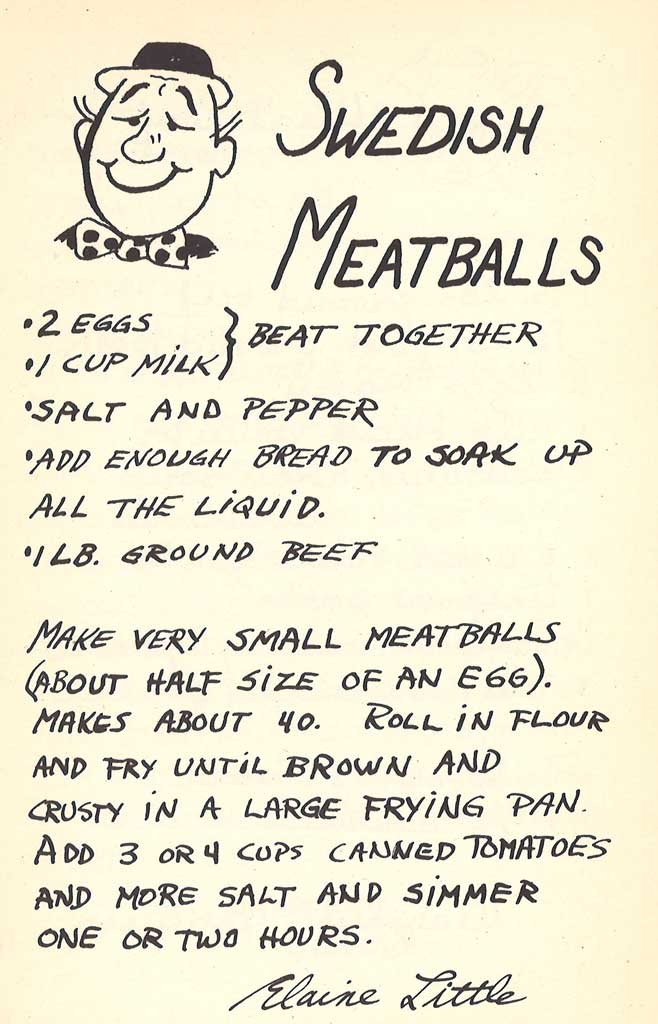 Born in 1921 in Rutland as Elaine Burns, Elaine Little is now 92 and resides at Shelburne Bay Senior Living. Little has dementia, but her daughter, Margaret Cicchetti, says her mother still remembers lending her recipes to the cookbook.

Little had more than most. Her contributions include the Swedish meatball recipe reproduced here, as well as French turnovers (cream-cheese pastry filled with jam or jelly, accompanied by an illustration of an upside-down Folies Bergère dancer) and peach pie.

Little wasn't the only one in her family to write out recipes for the book: Her mother-in-law shared her veal loaf, and two sisters-in-law also contributed. Little's father-in-law even printed Out of Vermont Kitchens at his George Little Press.

Cicchetti says that Little learned to cook in the kitchen at "the co-op house," Sanders Hall, where she lived while attending the University of Vermont. In her empty-nest years, Cicchetti goes on, Little went to antique shops and garage sales and created a business of refurbishing and reselling furniture.

But she doesn't particularly remember her mother being a stellar cook. "It's funny, because she's fantastic at so much other stuff," says Cicchetti. "She always cooked a lot, but it was never like, 'Wow!' She always acted like it was still the Depression and we had to eat macaroni-and-cheese or a casserole every night." 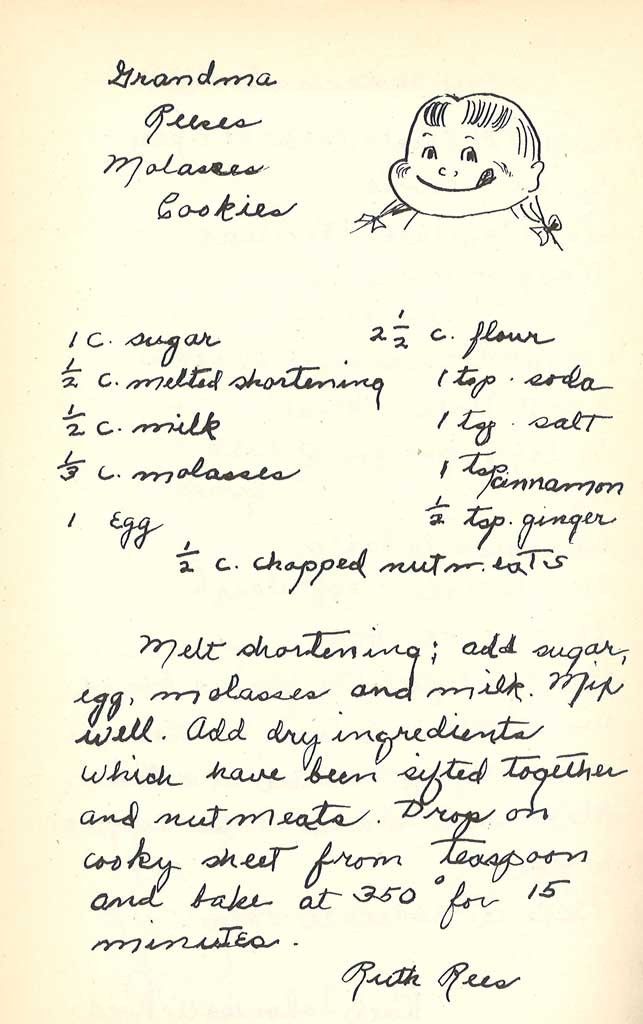 Ruth Rees passed away in 1998, but her molasses cookie recipe hasn't died. Her daughter-in-law, Maureen Rees, says it originated with Ruth's mother-in-law. Now Maureen and her grown children make the cookies for nine grandchildren, who range in age from 5 to 17.

Who was Ruth Rees? Maureen says that her mother-in-law's life was a love story to the end. She had a degree but chose to stay home and cook for her children and her husband, Frank. "They were crazy in love, those two," Maureen Rees says. They passed away in the same rehab facility 48 hours apart.

The couple's legacy of love lives on in the gingery cookies their family shares. Staying home and cooking was Ruth's "destiny," says Maureen. 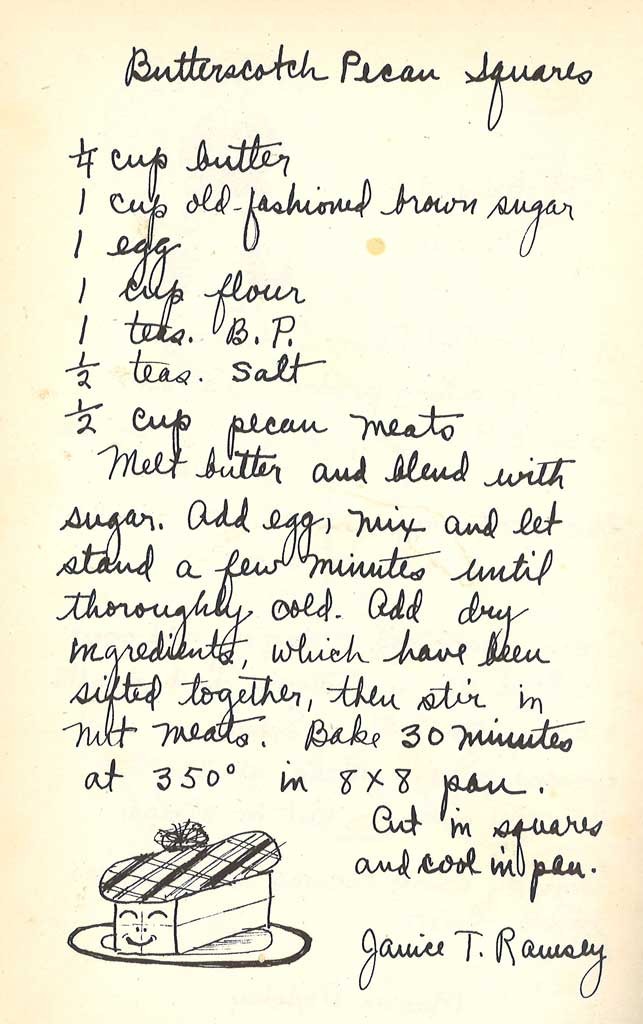 As far as Bea Ramsey can remember, her mother-in-law, Janice, didn't do much cooking. "She did not like to cook," corroborates Janice's son, John, now 82.

Janice had other pursuits in mind. After graduating from Smith College, she taught French in the Burlington school system. In 1925, she married the boy who'd grown up across North Prospect Street from her, Lee Ramsey; they had three children.

John Ramsey remembers the smell of freshly baked bread coming from his mother's kitchen while his father worked as president of Vermont Hardware Wholesale on Flynn Avenue. Apparently, baking wasn't as distasteful to his mother as cooking, but Ramsey says that her great love was music. A classical violinist who also sang in community choirs, Janice died in 1981.

John grew up to wed Bea, a woman who enjoys the kitchen. She prepares her mother-in-law's butterscotch pecan squares, as well as other recipes from Out of Vermont Kitchens, in the very same space where Janice once cooked them. For the Ramseys, neither the food nor its setting has changed much since 1951.