"Remains" of the Day 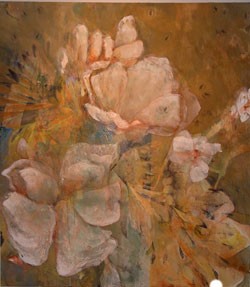 This year’s foliage season is over, but Stowe’s Helen Day Art Center has one “crop” that’s going to last forever. Tom Deininger’s “Vermont Foliage: Out of the Landfill into the Woods” is a mixed-media assemblage of plastics that’s even more vibrant than autumn’s tapestry. It’s the largest single piece in the gallery’s current exhibit, “Nature Remains: The Artist as Environmentalist,” which focuses on ecologically minded artworks. Nine artists are included, and several perils to Planet Earth are addressed.

Deininger’s oversized, wall-hung piece is certainly the edgiest. The Rhode Island artist’s roughly 84-by-108-inch work is encrusted about 20 inches deep with records, toys, CDs, wires and other discarded ephemera, all grouped in the reds, oranges, yellows and browns of fall. While the piece is a testament to the power of superglue, its obvious message is about modern disposable society. “My assemblages are puzzles,” Deininger declares in his artist’s statement. “When I discover a piece to one of those puzzles, I feel both disgust and excitement.” It’s nevertheless an intriguing and whimsical piece, making a serious point with humor and technical skill in equal measures.

Several large-scale pieces from Chris Jordan’s “Running the Numbers: An American Self-Portrait” series also stimulate both eye and mind. The Seattle photographer and collagist pays homage to pointillism with “Cans Seurat,” a 60-by-92-inch copy of “A Sunday Afternoon on the Island of La Grande Jatte” by Georges Seurat (1859-1891). But Jordan’s version has a crucial difference: Rather than applying Seurat’s dots of color with paint, he has compiled the image with pictures of 106,000 aluminum cans — the number, he explains, used in America every 30 seconds. “My hope is that images representing these quantities might have a different effect than the raw numbers alone,” Jordan notes in his artist’s statement. And so they do. His “Paper Bags” is an abstract design, about 60 by 80 inches, of tan and gray vertical lines representing the 1.14 million brown paper bags dispensed every hour at American supermarkets.

The title of Johnson State College professor Ken Leslie’s “And on the Ninth Day” is his biblical-sounding metaphor for the industrial revolution. The circular, accordion-folded artist’s book opens to approximately 5 feet in diameter. It lies on the floor on a black background, so that the fiery painted edges of a 20-inch hole in the piece’s center make it resemble a solar eclipse. Leslie’s theme is global warming, and a map of the Arctic regions encircles the blocked-out sun. God and Adam — à la Sistine Chapel paintings — float above. Around the rim of the dramatic circle, Leslie painted phrases such as “No Tenth Day for this Summer” and “No Snake to Blame for this Paradise Lost” in Gothic script with gold pigment.

“Eleusinian Mystery of the Quantum Honey Bees” is the title of a painting by University of Vermont art prof Cameron Davis. She refers to the Greek goddess of fertility, Demeter, and her daughter Persephone, as well as to recent esoteric theories about how the principles of quantum mechanics might explain bee communication. Davis’ 66-by-60-inch mixed-media canvas glows with a field of subtle honey colors surrounding large, exquisite white flowers. Transfer images of bees flit around the scene. Like all the works in the show, it’s a beautiful picture with a point. Davis calls attention to the mysterious global honeybee pandemic of Colony Collapse Disorder. If bees don’t pollinate humanity’s fruit and vegetable crops, future dinner tables — for those lucky enough to eat at all — will be very dull.

The exhibit also includes a Davis installation of painted fabric. Suspended over the gallery’s airy, brightly lit stairwell, “A Gift for the Road” comprises 10 gossamer, 5-by-7-foot veils on which bird wings are drawn in graphite and acrylic. An allegory of “global climate change, waxwings and transitions,” it is the most hopeful contribution to “Nature Remains.” Cedar waxwings, Davis notes, are symbols of transition and transformation. This piece was initially hung along the route of “The Road Less Traveled,” a five-day walk in 2006 from Ripton to Burlington that called attention to global climate change, and was meant to “bring a message of hope” to participants.

For those who still use gas lawn mowers and incandescent light bulbs, “Nature Remains: The Artist as Environmentalist” is a consciousness-raising reminder that individuals can make a difference.