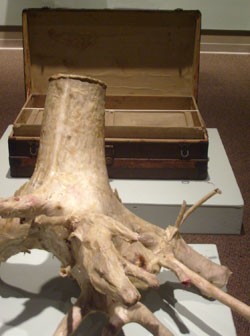 At the Metropolitan Museum of Art in New York City, an extensive array of armor, swords, helmets and halberds reside in their own sanctum, at some distance from the Monets, Renoirs and Picassos. In the Met’s vast collections, historical objects and fine art pieces go in separate zones, according to category and period.

That’s the rule of thumb in museums, where mash-ups of artifacts and art are unusual. Exhibitions that pull together historical objects and contemporary art are rarer still.

Marilyn Solvay decided to bring local contemporary art into the museum as a way to help visitors understand and interpret obsolete artifacts that have little relationship to modern life. As she puts it, “History is usually about dates and dead people, usually white dead people.”

In an effort to bring all that old stuff to life — along with the dead people the things belonged to — Solvay has introduced interpretive and interactive elements to the permanent collection and the rotating exhibitions in the main gallery space of the 16,000-square-foot museum, which chronicles the history of the oldest private military and engineering college in the country. (Norwich is no longer strictly a military college; in the 1970s, it began to accept women and later to offer civilian courses and programs. The current student configuration is about 60:40 cadets to civilians, according to Solvay.)

For “Inspired by Stories,” Solvay asked a group of 18 juried local artists to create new pieces in response to an object from the Sullivan. Interestingly, not one artist chose a gun as a point of reference. Their selections include Admiral Dewey memorabilia, a World War I shrapnel shell, drafting tools, a manual typewriter, a starched nurse’s cap, a wooden trunk and a short snorter (a four-foot-long string of banknotes from all over the world sewn together and signed by a soldier’s fellow travelers). The artists’ interpretations of these ordinary wartime objects range from the conceptual to the representational; in several instances, two artists had radically different takes on the same artifact.

Richard Gomber, an artist from White River Junction, uses the unsullied whiteness of the nurse’s cap (displayed in a nearby case) to riff on that other icon of purity — snow. In the oil painting “Needs No Starch,” he explores the many colors of snow as it sparkles white in sunlight and darkens to blue in shade. What gives the painting its underlying tension is the contrast of these exotic hues with the quotidian subject of snow piled on a roof dormer.

Nearby is another vision derived from that same stiff white hat: “Home Front,” which artist and Norwich art professor Angelo Arnold calls an “anthropomorphic” object. The sculpture, which consists of white canvas stretched over a red wood frame, looks like a cross between a gurney, a wheelchair and a cot.

Burlington painter Marc Awodey chose a slide rule and other drafting implements as the inspiration for his mixed-media piece “World Trade Center — 1963.” The artist’s father was 29 when he became part of the team of 12 architects who helped Minoru Yamasaki design the skyscraper complex. In 2001, he watched as planes brought the two tallest towers down. Awodey wanted to represent, as he puts it, the “bookends” of his father’s career. Though no members of the family died in the terrorist attack, the collapse of the skyscrapers devastated his father.

Awodey’s diptych places a grim, abstracted geometrical likeness of the towers and the buildings in their shadow against a streaked blue sky. Copies of letters he and his father exchanged are pasted to one side of the image. Below is a portrait of the architectural team gathered around a conference table, examining plans and models for what was, at the time, the tallest skyscraper in the world. The relationship to the Norwich slide rule and drafting paraphernalia? According to Awodey, the World Trade Center complex was designed with just such a set of drafting tools.

In the center of the exhibition stands an old wooden and metal footlocker from the class of 1940, and adjacent to it is a different kind of “trunk” — a tree trunk made of paper. Riki Moss took as her inspiration a soldier’s personal effects — letters, photos, blankets, a folded sweater. All these contents had disappeared by the time the trunk was donated to the university. “What remains is an empty, ordinary box,” Moss writes. Her “trunk” is likewise an empty vessel: what remains after a tree has been cut down and left to rot. The piece, titled “Gone,” is a visual representation of loss, void and even death.

“Inspired by Stories” manages to draw on the Sullivan collection’s old stuff and dead people without leaving the viewer outside history. The artists make connections between the present and the past through several degrees of separation, and in their works the people who possessed or inspired these objects appear to us in all their lived-in reality.