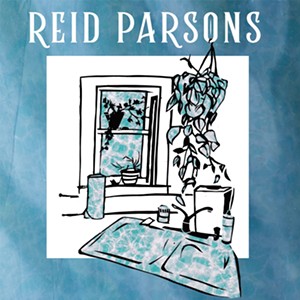 Burlington singer-songwriter Reid Parsons recently showcased her appreciation for pop music during a performance at ArtsRiot. Though it was technically a release show for her debut self-titled EP, the folksy singer-songwriter quickly moved into a selection of well-known covers from practically every recent decade. Her soulful takes on Bill Withers' "Ain't No Sunshine" and Amy Winehouse's "You Know I'm No Good" were just as charming as her rendition of Radiohead's heady "High and Dry."

That same appreciation and mastery of pop comes through on her five-track collection — though more in structure than style. Parsons sticks to the tried-and-true sounds of wistful Americana, bolstered by the incomparable talents of some noteworthy local players. Namely: Russ Lawton contributes drum work, and Brett Lanier adds his exceptional pedal steel skills. Compositionally, the artist's verses are wrought with tension, which inevitably find their way to cathartic and memorable choruses.

Parsons captures exquisite moments of quiet solemnity, the kind that we all face as the daylight hours dwindle and darkness becomes the rule of the land. (The EP couldn't have come at a more perfect time.) "I'm clocking in at 7 again / It won't be 'til past dark when I get out," she sings on opening track "Addison." The phenomenon she sings of is more than relatable; it's inescapable. Who hasn't experienced the sinking feeling of daylight slipping through your fingers when it's in such short supply?

"Addison" also demonstrates the artist's dynamic choices when it comes to arrangements. It begins simply and assuredly with only Parsons' voice and acoustic guitar, then other elements slowly creep in and build toward a soft climax. Cello, courtesy of Emily Taubl, and Lanier's pedal steel billow around Parsons and co-producer/engineer Yasmin Tayeby's affecting harmonies. Lawton kicks in with a shuffling beat, which subtly shifts into double time at the song's midpoint.

Stark and gut-wrenching, "Charlie" is a dark and brooding portrait of a restless soul. A militaristic beat hints at the fate of the titular character ("So Charlie shook the hand of the recruiter / At the entrance of the school / And then he was gone) while a sour cello line slowly cascades behind Parsons' vocals.

With only background vocals to assist her, Parsons' guitar and vocals are front and center on acoustic soul ditty "I Don't Mind." Her voice meanders into the occasional melisma as she pours it over her own strumming.

"Not Ready to Return" evolves into a gorgeous chorus of high and low voices, intertwined in a multipart harmony. The guitar drops out, leaving the voices hovering in reverb.

Parsons has a warm spirit. Even though her tunes touch on hardships and dark times, they impart a sense of hope that's lately in short supply.

Reid Parsons is available on CDBaby. Parsons performs on Saturday, November 24, at Radio Bean in Burlington.