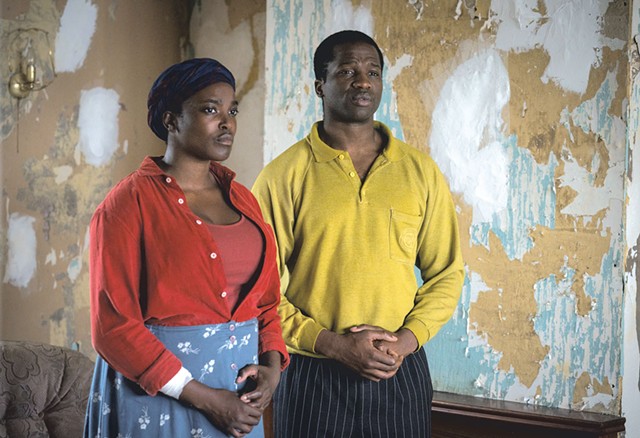 Our streaming entertainment options are overwhelming — and not always easy to sort through. This week, the warm weather had me turning my mental clock back to the lead-up to Halloween. It seemed like a good time to watch His House, Netflix's new socially conscious horror flick from debut director Remi Weekes.

Married couple Bol and Rial Majur (Sope Dirisu and Wunmi Mosaku) fled from their native South Sudan to the UK hoping for a better life. Released from detention, the two refugees are given a modest row house in an economically depressed town and the task of sitting tight and proving they're "good people" worthy of their new home. Under no circumstances are they allowed to relocate without official permission.

So, naturally, the house turns out to be haunted. Mysterious bumps and a humming voice resonate through the shabby rooms. Wallpaper peels itself off to reveal terrifying visions. Something is stalking Bol and Rial, and at least one of the phantoms is well known to them — the young daughter, Nyagak (Malaika Wakoli-Abigaba), whom they lost on their harrowing journey to England.

His House is a sly hybrid: half haunted-house flick, half sober drama about culture clash, trauma and survivor's guilt. Viewers who come for the former film rather than the latter may be disappointed when the haunting doesn't escalate in the meticulously sadistic way that films such as The Conjuring have taught us to expect. Weekes dials the scares up to 11 prematurely, then pulls back to examine everything those scares are a metaphor for.

By the midpoint, the house is more dreamscape than hellscape, a place where the couple's memories and fears meld into surreal visions that paint themselves directly on the walls and floors. (I was reminded of the stunning 2018 animation The Wolf House, also about a haunted refugee.)

The central issue is not whether the ghosts are real but which spouse is taking the right approach to them. While Bol does his best to fight the haunting, Rial embraces it as a chance to bargain with the supernatural — specifically, an angry witch — for Nyagak's return. The split replicates their different attitudes toward their new home: While Bol tries desperately to fit in, cheering for soccer players at the local pub, Rial can't overcome her sense of loss and alienation.

Weekes' screenplay and staging depict the couple's situation with nuance; it's clear why they feel isolated and sometimes paranoid, yet neither they nor their English neighbors are caricatured. Some people are welcoming to them, others hostile, others indifferent.

The two central characters could be more fleshed out as individuals, but the actors inhabit them fully, conveying complex emotional shifts with small changes of expression. There are moments of levity, too, as when Bol and Rial spy an old woman shambling down the street and joke that she must be the queen they've heard so much about.

When it comes to horror cinema, I'm a sucker for deep-focus shots where a monster appears subtly in the background, visible only to the audience, and the first half of His House offers some masterful examples of this tactic. If the second half is less scary, it's because Weekes has revealed that the real monster chasing the couple is their own past, which takes increasingly gruesome forms the more they attempt to repress it.

The ending has an elegiac quality that fans of The Babadook will recognize, revealing the movie to be less a genre film than an earnest psychological drama about migration, loss and belonging. Right now, refugees seem to haunt the Western imagination; His House suggests that they are, first and foremost, always the haunted.

Horror Noire: A History of Black Horror (2019; Shudder, AMC+, Urban Movie Channel): Xavier Burgin's documentary traces a century of African Americans' depictions in and contributions to the horror genre, leading to the current renaissance represented by Jordan Peele's hits Get Out and Us.

Under the Shadow (2016; Netflix, rentable): Real-world terrors spin themselves into otherworldly ones in this art-house horror flick about a politically marginalized young woman sheltering with her child in the war-torn Iran of the 1980s.

Demon (2015; Kanopy, Shudder, AMC+, rentable): This film from Poland, about an outsider marrying into a small farming community, finds subtle, cerebral scares in culture clash and the refusal of the past to stay buried.

The original print version of this article was headlined "His House"