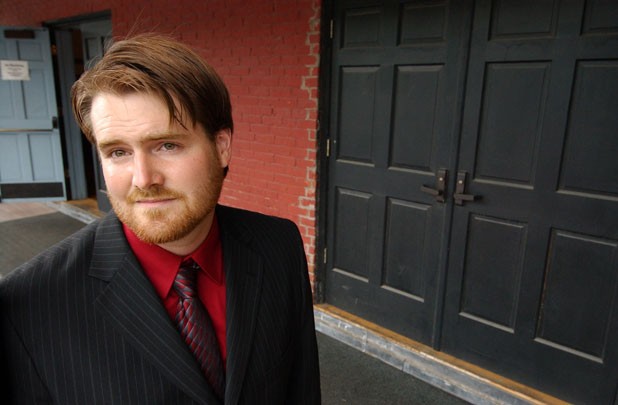 When Thomas Hermann stepped up to the podium in Barre's Old Labor Hall last week to announce his candidacy for Vermont's lone congressional seat, the event didn't just mark the 29-year-old's first foray into electoral politics. It was, according to an aide, his first public speech ever.

Hermann, an Iraq war veteran running on the Progressive Party ticket, is the only major-party candidate challenging Democratic incumbent Rep. Peter Welch. (Craig Hill of Montpelier will challenge Welch in the Democratic primary.)

By any measure, Hermann faces a tough, uphill fight. Not only is the Waitsfield farm worker up against Welch's sizeable war chest, which totals nearly $1 million, but the Florida native has only been in Vermont since March.

"I'm not a politician. I'm not even tested in the political arena," Hermann told the dozen or so reporters and campaign backers who attended his press conference. "But I come pure and unattached."

Longtime Vermont politicos may be wondering whether Hermann's aides have briefed him on the correct pronunciation of "Calais" or the number of teats on a Holstein. But despite his greenness to the Green Mountain State, Hermann is hoping that his 16-month deployment in Mosul, Iraq, in 2006 and 2007 will garner him the support of Vermonters who vehemently oppose the war and are frustrated by the Democrats' slow progress in bringing the troops home.

Indeed, Hermann's candidacy reflects a growing national trend of Iraq war veterans who are exchanging their rifles for campaign buttons. This year, a record number of recent combat veterans from both national political parties have thrown their hats in the ring. In fact, two Iraq war vets will face off in the November general election in California's 52nd congressional district.

The involvement of citizen-soldiers in America's political process is as old as the Republic itself. But just as the attacks of 9/11 spurred an entire generation of young people to enlist in the military, so, too, have the bloody and controversial wars given rise to a new generation of politicians - as well as political action committees dedicated to getting them elected.

"This is the first time in American history that veterans of a conflict have run for office while that conflict is going on and the outcome is in doubt," notes Kieran Michael Lalor, a Republican candidate for Congress in New York's 19th congressional district.

Lalor, 32, is the founder of Iraq Veterans for Congress, a political action committee dedicated to helping candidates get elected to national office. The group, which formed in January, is lending its support to 16 Iraq war veterans nationwide, all of whom are Republicans who support the current mission in Iraq. According to Lalor, the group has already raised $30,000 via its website and a "comparable amount" through the mail, with contributions coming in from all 50 states.

More established on the national stage is VoteVets.org. This PAC, which was founded in January 2006 by Iraq war vets Jon Soltz and Jeremy Broussard, has become a regular fixture in the mainstream media for challenging incumbents on issues such as equipment shortages for deployed soldiers and inadequate medical care for returning wounded vets.

In 2006, VoteVets ran a number of effective attack ads that helped unseat the Republican incumbents in five states, including Sens. George Allen of Virginia and Rick Santorum of Pennsylvania. This year, the group has already endorsed 14 congressional candidates, and another half-dozen or so candidates in state races from Maine to California.

Unlike Iraq Veterans for Congress, VoteVets.org claims it supports both Democrats and Republicans, though its positions have been strongly critical of the way the Iraq war has been waged. According to the group's website, its main objective is to "expose the records of the most egregiously incompetent public officials, whether it is the failure of key members of Congress to ask the most urgent and difficult questions on the war or those whose votes have hurt our nation's veterans."

In Vermont, Hermann says he's received no support from any national organizations. However, two of his key staffers could help garner him support in antiwar circles. Hermann's staff includes James Leas of South Burlington and Dan Dewalt of Newfane, who co-wrote the 2007 town meeting resolutions to impeach President Bush, which passed in 37 towns. That same year, they also got antiwar resolutions on the ballot in 24 towns, which called for bringing the troops home immediately.

Though Welch doesn't support the impeachment efforts of some of his constituents, he has amassed a sizeable track record on progressive issues. For instance, Welch voted against funding the war without establishing timetables for U.S. troop withdrawals. He opposed amending the Foreign Intelligence Surveillance Act to make it easier for the government to spy on U.S. citizens. And, as a member of the House Government Oversight and Reform Committee, Welch shepherded a bill through Congress to crack down on waste, fraud and abuse by defense contractors operating overseas.

Still, Hermann has accused Welch of "compromising" his antiwar credentials.

"Congress needs a voice that understands the real-world ramifications of their actions," Hermann said. "While the Democratic Congress sat on its hands, the Bush administration has systematically shredded the Constitution, instituted torture, [and] violated international and U.S. law."