Rediscovered Horror Film 'The Empty Man' Is Full of Inventiveness 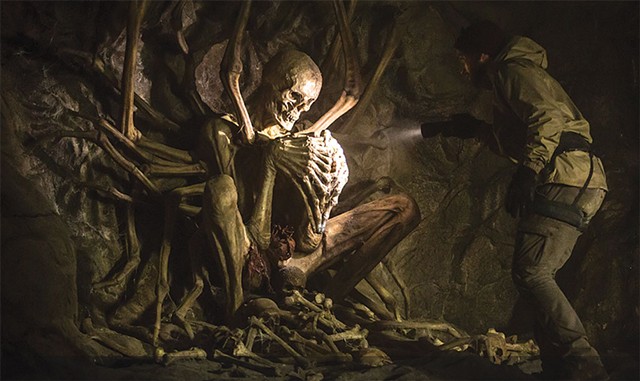 Last October, a horror movie called The Empty Man appeared briefly in theaters and disappeared. Its marketing was so lackluster and generic that I remember struggling to write a short description for this paper: "A crime investigation turns into a horror scenario when an ex-cop discovers a group trying to summon something supernatural." On the surface, the film's only notable feature was its length — 137 minutes, when most horror flicks are closer to 90.

Months later, I started hearing online chatter about The Empty Man, which was finding a streaming audience. (It's currently on HBO Max and rentable on Apple TV.) In April, Vulture called it "the next great cult horror film." Oscar winner Guillermo del Toro was reportedly so impressed with the movie that he invited director David Prior, previously known mainly for making DVD featurettes, to contribute to his new anthology series.

I checked it out.

In 1995, a troubled young man hiking in the mountains of Bhutan discovers alien-looking skeletal remains in a cave. "If you touch me, you'll die," he tells his friends. They do touch him. They regret it.

After this 22-minute prologue, the scene shifts to Missouri in 2018. Widowed ex-cop James Lasombra (James Badge Dale) investigates the case of a friend's teenage daughter who has gone missing, leaving the words "The Empty Man made me do it" in blood on her bathroom mirror.

The Empty Man, James learns, is a figure of urban legend whom a local police detective (Ron Canada) holds responsible for a "contagion" of murders and suicides. The legend is also central to the beliefs of the Pontifex Institute, a cult with which the missing girl, Amanda (Sasha Frolova), was involved. When James explores the cult's stronghold, he finds himself going deeper down the rabbit hole than he planned.

A throwaway detail in a movie can say a lot. Early in The Empty Man, we see that Amanda attends Jacques Derrida High School. I knew then that we were in for some big ideas and perhaps even the dreaded P word: pretension.

The father of postmodernist philosophy, Derrida made his name by deconstructing what he called the metaphysics of presence. Before she disappears, Amanda tells James that the Pontifex Institute taught her to embrace the void: "Nothing can hurt you because nothing is real."

When James leafs through some Pontifex literature, he finds assertions that sound like watered-down postmodernism — "Nothing is binary; everything is fluid" — alongside anti-science rhetoric. The institute's overarching faith is that thoughts are every bit as real (or as unreal) as anything else in the world, and every bit as powerful. In an era of "alternative facts" and rampant conspiracy theories, it's a resonant and disturbing notion.

So, yes, The Empty Man is philosophically ambitious, portentous and sometimes even pretentious. ("It's inexplicable ... we can't indict the cosmos," the detective intones.) At times I was reminded of the wonderfully hokey supernatural thrillers of yore, such as Angel Heart and Jacob's Ladder.

The extended prologue works as a self-enclosed story, reminiscent of the teasers that used to open episodes of "The X-Files." The pacing, lighting, sound effects and purposeful camerawork all build to a crushing tension. Later, when we see how the prologue's events match up with the Empty Man legend, the film's parts snap together with a queasy sense of inevitability.

The Empty Man keeps us off-kilter. With his action-hero physique and piercing eyes, James is a stabilizing presence who will never succumb to the weirdness around him — or will he? In a running joke, he expresses his intolerance for woo-woo beliefs by growling, "I grew up in San Francisco." But the more often he says it, the emptier and more defensive it sounds.

After all, James has taken the steps to summon the Empty Man, as dictated by the legend — and they appear to be working. As his sanity frays, the movie builds to a climax as nail-biting as its prologue.

With its philosophical chatter and its relative paucity of jump scares and gore, The Empty Man may not appeal to some meat-and-potatoes horror fans. Those who are up for a little wild ambition, though, will find that few horror movies are less generic than this one.

Candyman (2021; in local theaters): Possibly the best urban-legend movie ever made is the original 1992 Candyman, which explores how collective trauma can generate a bogeyman. Billed as a sequel, the new film foregrounds the original's themes of racial oppression.

A Glitch in the Matrix (2021; Hulu, rentable): "Nothing is real," the watchword of the Pontifex Institute, is a belief shared by many people featured in this documentary, which explores the strange hypothesis that our world is a simulation.

Pontypool (2008; Kanopy, IFC Films Unlimited, AMC+, rentable): In The Empty Man, thought is a contagion. In this thinky Canadian horror film set inside a small-town radio station, the virus is language itself. Both films riff on the idea that repetition voids words of their meaning.