The return of dynamic duo of Vermont hip-hop, The Loyalists 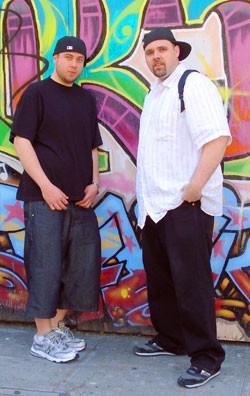 Before moving to San Francisco in August 2005, The Loyalists were among the more highly regarded hip-hop acts in Vermont. The years since their departure has seen an explosion of hip-hop artists emerge throughout the state, many of whom likely owe the group a debt of gratitude. Hip-hop has existed in Vermont for a long time, but Framework, DJ E-Train and DJ Touchphonics — who has since left the group — helped sow the seeds of the scene’s current incarnation. To wit, reigning Burlington hip-hop champs The Aztext were born shortly after MCs Pro and Learic performed at the release party for The Loyalists’ second album, Get What You Give.

Seven Days recently caught up with The Loyalists’ DJ E-Train by phone in advance of the duo’s homecoming gig and release party for their new album, Redemption, this Friday at Nectar’s.

SEVEN DAYS: What prompted the move to San Francisco?

E-TRAIN: There was a group called The Subliminal Twinkies that were on tour and they came into Burlington one summer and we ended up doing a show with them, and they talked about having us come out to San Francisco to do a show. And once they finished the tour, they set up a show in Berkeley in February 2005, I think, and we just really loved it.

We were kind of looking to make a move. I mean, we all love Burlington, but we found ourselves playing the same spots a lot and decided just to do something drastic. So we all picked the Bay and moved out there at the end of the summer.

SD: That is pretty drastic. How was the transition?

ET: It was kind of a rocky start. None of us had jobs and we were trying to figure out where we were going to live. After a couple of months we started recording a lot of music together and started doing shows. It’s always tough, leaving your home fan base to start from scratch somewhere else. But it’s made us a lot stronger having to do that.

Touchphonics has always been really into drum and bass, so after about a year out here, he decided he wanted to go his separate way and really focus on that. Framework and I had always really been used to it being just the two of us, and so we went back to that. Once he left the group, we decided we really wanted to focus on finishing up the third album and making this one something special.

SD: Was it difficult to break into the hip-hop scene in SF?

ET: It’s still a little difficult to find a niche. Of course the hyphy movement is really big out here, which you deal with a lot. It’s the popular thing out here, E-40 is kind of a legend in the Bay area. The underground scene is really strong, but it’s also very spread out all over the place. There’s not a real backbone behind it. So, yeah, it’s difficult.

But now that we’re done with the third album, we’re going to really push hard to do more shows. Nothing’s ever as it was planned. We always thought it would be a little bit easier. But, like I said, there’s a lot going out here, but it’s kind of separated. I think if people came together more and did things together, it would build the scene. But people are just kind of doing their own thing. That makes it difficult.

SD: Obviously the SF scene is bigger, but how would you say it compares to the Burlington scene?

ET: It’s tough to say. There’s such a wider variety of stuff going out here. Living in Burlington, you’re dealing with a smaller population, so it’s a lot easier to be involved in everything that’s going on. You can kind of get a monopoly on things in Burlington and, you know, open for whoever is coming into town. Out here, you’re dealing with so many different people, it’s not like there’s one promoter or person that controls everything.

SD: Are you excited for the homecoming show?

ET: Our whole thing with live shows is to try to make it a real party atmosphere throughout the night. We’re excited that The Aztext are gong to be there. Our last album-release party, when we were still living in Burlington, Lyric and Pro weren’t even together yet, and they were both opening for us. And that’s sort of when they came together. We haven’t performed with them since they became The Aztext, so we have quite a few songs to do together, all the stuff we’ve done over the years.

And we’re really excited about the album. One of the biggest things that we really tried to focus on was to make an album that you can really listen to front to back. It’s one of the big things that we feel is really missing from a lot of hip-hop these days. An album comes out and there’s, like, two or three great songs and a bunch of filler. You can tell people just rushed it out.

So that’s our main goal. Just to put together a strong show because we feel like our album is like hip-hop albums used to be. A continuous album that you can listen to the whole thing. And that’s our goal on stage,  as well.