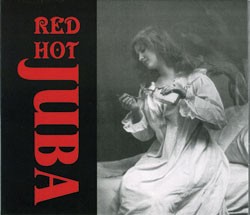 Because Seven Days is an “alt-weekly,” its writers are allowed to take certain creative liberties our straightlaced journalistic brethren simply can’t. Like, for example, judicious use of the F-bomb, my personal favorite exception to the “rules.” My second favorite? The ability to employ specific, unconventional genre labels to artists in our club listings. To be sure, we still paint in broad strokes. A cursory glance of the listings will reveal no shortage of “rock” and “indie” bands gracing area venues in any given week. But look closely and you’ll find certain local acts listed with unique descriptors, such as Barbacoa (surf noir), Brett Hughes (swampy-tonk) and Red Hot Juba (cosmic Americana). The latter has just released their self-titled debut album, finally answering the age-old question: “So, just what the hell is “cosmic Americana?’”

As it turns out, cosmic Americana has absolutely nothing to do with space cowboys. Nothing against Steve Miller or his fans, but I believe that’s a collective sigh of relief you’re now hearing. Rather, the genre — or Red Hot Juba’s take, anyway — is a sparkling blend of hot-house jazz and country swing, equal parts Django and Hank with just a pinch of Merle thrown in for good measure.

The disc gets under way with the jaunty “Lovers Lane.” Juba is a consummate ensemble, so leading off with the tune, which features solos from nearly everyone in the outfit, seems a natural decision.

“How’s About You,” (CLICK HERE TO LISTEN) written by original bassist Brian Wichert, follows in similar, albeit risqué, feel and theme.

My favorite track is the album’s lone instrumental, “After Dark,” penned by multi-instrumentalist D. Davis, who is one of the more underrated guitarists in Vermont. While his chops are always first-rate, the unassuming Davis delivers them with mesmerizing taste and restraint. Here, he applies the same approach to mandolin with equal effect.

Each member of Red Hot Juba plays with similarly tactful authority. As the album meanders through various stylistic territories — from the roadhouse rumble of “Green Mountain Blues” to the breezy “Bubbles in My Brain” and Dead-esque country groove on “Shine, Listen, Learn” — the band plays as a whole, never cluttering space, and allowing the music to breathe. It is the mark of seasoned pros.

The band doesn’t always connect — I could do without the cover of Tom Waits’ “Jockey Full of Bourbon,” which loses something sinister in translation. But more often than not, Red Hot Juba delivers subtly nuanced “cosmic Americana” with unparalleled taste and aplomb.

Catch ’em this Saturday as the band unleashes its new disc at The Monkey House.

LISTEN: How's About You