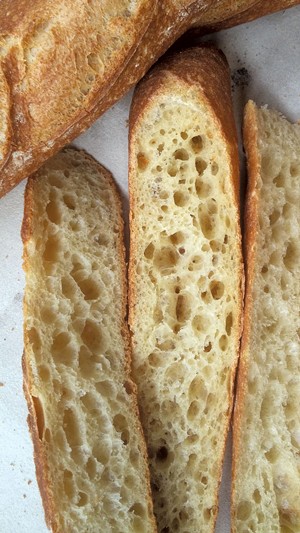 As of mid-January, Red Hen Baking is sourcing the vast majority of its wheat within 150 miles of its Middlesex bakery. The bakery turns out about 6,000 loaves of bread, pastries and other baked goods weekly, burning through about 7,000 pounds of flour.

According to owner Randy George, Red Hen has been buying 20 percent of its grain from Vermont wheat farms for several years, but the rest came from a cooperative organic mill in western Kansas. By year's end, all that grain will come from a family-run farm and mill in Québec.

Now, Red Hen bakes most of its bread using a custom blend of the Québécois wheat. Says George, "The really astounding thing is that the quality is fabulous. It's as good as anything we've ever used."

That's great news for him, as midwestern wheat has become increasingly unreliable in recent years. After last year's disastrous crop, most American bread-basket mills had to source organic grain from South America. Prices skyrocketed, and quality became a concern. "It was really quite sudden," George recalls. "We scrambled and got [flour] from wherever we could. King Arthur pulled the plug completely on their organic line [for a time]. They have a policy of using only American-grown wheat, and there just wasn't any organic wheat available. It was a real crisis."

The original print version of this article was headlined "Sweet Wheat"