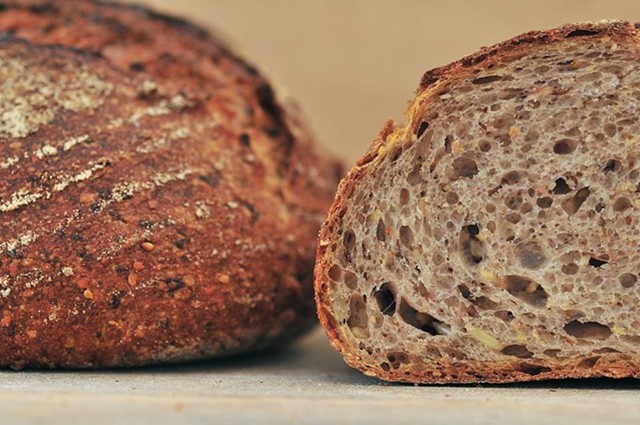 Update, January 26, 2021: Red Hen Baking bread will be back  in stores on January 26,  according to its Facebook page. The bakery's cafe will reopen on Thursday, January 28.

Since its founding on September 1, 1999, Red Hen Baking in Middlesex has baked bread every day but Christmas and Thanksgiving. It was also closed for a few days during its first month in business due to Hurricane Floyd.

The 21-and-a-half-year baking streak came to a temporary halt on Friday after a Red Hen employee tested positive for COVID-19, according to co-owner Randy George. It’s unclear how long bread production and distribution will cease, George said, but it could be about a week following Friday’s early morning delivery.

“We’re baking for the community and we’ve always been committed to making fresh bread,” George said. “If we’re making this kind of bread, we need to be delivering it fresh.”

Red Hen produces about 14,000 loaves of organic bread a week, sold at grocery stores and co-ops around the state. The bakery is closed for the safety of its staff, and because 10 of its 50 employees are in quarantine, George said.

Upon learning of the positive test result, four additional staffers opted not to come to work  because they didn’t feel comfortable or safe at the bakery. George noted that's a choice Red Hen offers its employees.

“It’s not our goal to change the minds of people who are feeling not safe [at work],” George said. With more than a dozen people out, he continued, the bakery can't operate at its current capacity.

George explained that Red Hen implemented its own contact tracing efforts before the employee learned he was positive for COVID-19. The bakery identified contacts within the company when the employee’s partner began to feel unwell earlier in the week.

“It concerned us,” George said. “We hadn’t had anything that close in the last 10 months, since all this started.”

The employee with COVID-19 hasn’t been at work since Monday, George said, and was off work for three days before then. When his test result came back positive Thursday afternoon, the 10 staffers previously identified by the bakery as close contacts went into quarantine, George said. Red Hen was contacted by the state’s contact tracers late Friday morning, he added.

“We wanted to be doing everything as proactively as possible,” George said. “What we’re learning is that being amateurs, we were overly conservative.”

For example, five people who attended a meeting  with the infected employee are in quarantine, though only one person was within six feet of that person, George said. Everyone was wearing a mask.

The bakery’s café, which is operating as a takeout business during the pandemic, is also temporarily closed. The café sells fresh bread, along with coffee and espresso drinks, pastries, cookies, soups, salads and sandwiches. It closed Friday, as announced on the bakery's Facebook page.