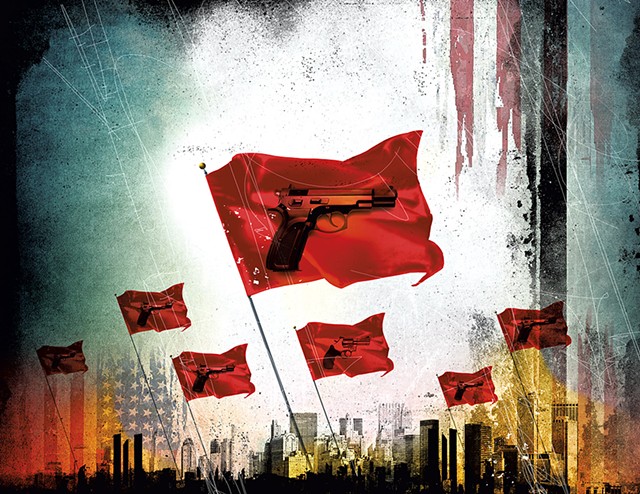 In an address to the nation last week, President Donald Trump proposed an expansion of so-called "red flag laws" to prevent mass shootings such as those that killed 31 people days earlier in Texas and Ohio.

"We must make sure that those judged to pose a grave risk to public safety do not have access to firearms," the president said, "and that, if they do, those firearms can be taken through rapid due process."

Vermont lawmakers came to a similar conclusion last year when they enacted a trio of gun laws in response to an alleged planned school shooting in Fair Haven and an actual one in Parkland, Fla. Among the measures was a red flag law similar to what Trump is now proposing, better known in Vermont by the legal mechanism it created: the "extreme risk" protection order.

The new law allows authorities to immediately seize firearms from those deemed to be an imminent risk to themselves or others. Though county prosecutors can obtain such an order from a judge without a formal proceeding, they must make their case in court within 14 days to retain custody of the guns for six months. Orders can be extended by an additional six months if the threat persists.

According to Vermont prosecutors, the tool has helped defuse dangerous situations, but it's more likely to help those in mental health crises than to stop potential mass shooters.

"The reality remains that in a nation awash in firearms, an individual who wants to obtain a weapon to commit mass murder is going to do so," said Windsor County State's Attorney David Cahill. "These state red flag laws are simply erecting a low hurdle. We're making it just a little harder to get a gun."

Cahill, who has obtained at least five extreme risk protection orders, believes other states should follow Vermont's lead, because the orders allow for the confiscation of weapons when no crime is charged. But, he added, "The suggestion by the president that red flag laws would somehow stop this epidemic of mass shootings is simply disingenuous. It's a distraction."

According to records provided by the state Office of Court Administration, prosecutors have sought 27 extreme risk orders since Gov. Phil Scott signed a law creating them in April 2018. Of those, only one temporary order was immediately denied by a judge; four final, six-month orders were also denied.

Attorney General T.J. Donovan said he expects the use of the orders to grow in Vermont. "With any new law, you always have that period of education and public awareness," he said, adding that a national debate about their utility could add to that awareness. "The fact that Vermont was ahead of the curve is a good thing," Donovan said.

Other elements of the state's 16-month-old gun laws have been tested less frequently or are more difficult to measure. According to the Office of Court Administration, only two charges have been filed under a law banning possession of large-capacity magazines; one person has been charged with illegal possession of a bump-fire stock; and nobody has been charged with selling firearms to those under the new minimum age of 21.

Both of the high-capacity magazine charges were brought against Max Misch, a notorious white nationalist from Bennington who has been accused of harassing former state representative Kiah Morris. Misch lost a constitutional challenge of the law in Superior Court last month, but his appeal is bound for the state Supreme Court. The Vermont Federation of Sportsmen's Clubs has also challenged its constitutionality.

The new laws also require most gun buyers, including those engaging in private transactions with unlicensed sellers, to undergo a criminal background check. According to Federal Bureau of Investigation records, the number of private sales in Vermont making use of the National Instant Criminal Background Check System roughly doubled in the year after the laws were enacted. FBI data show that the system was used during 52 private sales in the year ending in April 2018, the month the law was enacted, and 101 times the following year. 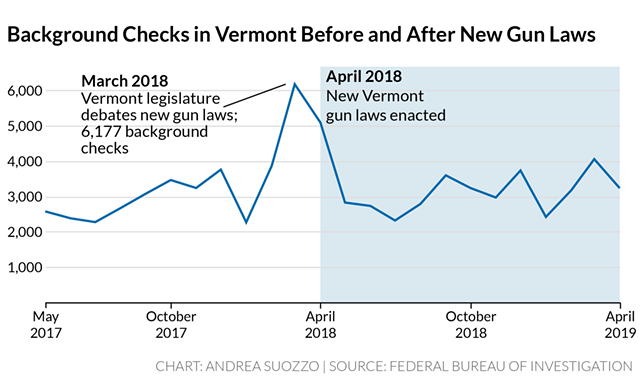 That amounts to just a fraction of the overall number of background checks conducted in Vermont — including for sales conducted by federally licensed dealers — which actually decreased following passage of the new laws, from 40,852 the year before enactment to 37,033 the year after. That decline, however, may reflect the number of firearms sold, not the rate at which buyers underwent background checks.

Gun sales in Vermont, as in the rest of the country, tend to spike after mass shootings, when new laws are being considered. The heaviest use of the background check system came in March 2018, at the height of Vermont's gun debate. That month, there were 6,177 checks in the state — up from 4,051 the previous March.

It's impossible to know whether the relative paucity of gun charges means the laws are working or aren't. "If people aren't buying [large-capacity magazines], which is what the law is designed to do, then you wouldn't have charges," noted Sen. Philip Baruth (D/P-Chittenden), an outspoken proponent of gun control. He hopes to invite law enforcement officials before the Senate Judiciary Committee next winter to ensure that they're adequately enforcing the measures.

One new gun law's impact has been particularly difficult to measure. As lawmakers established extreme risk orders, they also made it easier for police officers to temporarily confiscate weapons possessed by those accused of domestic assault. Because such seizures don't require court approval, there's no centralized record of how frequently that procedure has been used.

Anecdotally, county prosecutors say they think it's been limited. Vermont Network Against Domestic and Sexual Violence executive director Karen Tronsgard-Scott, whose organization lobbied for the law, agrees: "My sense is there's not much happening."

Like many gun restrictions, Vermont's red flag law is the result of tragedy and potential tragedy — starting with the January 2013 hospitalization of a Bennington County high school teacher who made threatening statements in online videos and was seen carrying a semiautomatic rifle to his car. The incident alarmed Dr. Christopher Barsotti, an emergency room physician at Southwestern Vermont Health Care, and prompted him to buttonhole Sen. Dick Sears (D-Bennington) about the lack of options to confiscate guns in such situations.

"After a night shift, my brain is sometimes unfiltered, and I was a little more direct," Barsotti recalled. "I was like, 'We have a problem. What are we gonna do? This is real.'"

It took years, but Sears eventually introduced legislation at Barsotti's behest, in January 2018, to establish extreme risk orders. The bill got an unexpected — and unfortunate — boost the next month when a gunman killed 17 people at a high school in Parkland, Fla. Days later, Vermont police arrested 18-year-old Jack Sawyer of Poultney after unraveling his alleged plot to shoot up Fair Haven High School.

The incidents prompted Scott, previously an outspoken proponent of gun rights, to campaign for a series of new firearm restrictions, including Sears' bill. The day after the governor signed the measures into law on April 11, 2018, Sawyer himself became the subject of the state's first extreme risk order. The Vermont Supreme Court had just thrown out felony charges against him, and prosecutors argued he could be a threat to the public.

Other uses of the orders have attracted headlines, such as when a pair of 14-year-olds allegedly threatened to shoot up Middlebury Union Middle School in December 2018. Extreme risk orders were issued to one of the students and to a relative whose guns were allegedly part of the plot.

Chief Administrative Judge Brian Grearson, who represents the judiciary before the legislature, said he was surprised that prosecutors were using extreme risk orders even when they could charge a crime. "I always viewed these orders as something somebody could seek if there was nothing else in play," he said.

Most cases have drawn little public notice. In one such instance, according to court papers, employees of a Windsor County mine complained to police that a neighbor was firing off rounds and screaming obscenities at mine workers. The neighbor's mother told police that noise from the mine had exacerbated her son's mental health condition and that he would like to die via "suicide by cop."

Cahill, the Windsor County state's attorney, applied for an order in June 2018, arguing in court papers that the man posed "an extreme risk of causing harm to himself." A judge granted a temporary order, and the man voluntarily agreed to surrender his firearms for six months.

"I think it was appropriately used in that context, and time will tell whether it was enough," Cahill said. "The important message to him was that we cared about him. We cared about his life as much as the people around him."

Addison County State's Attorney Dennis Wygmans, who applied for the Middlebury orders, thinks the tool has been reasonably effective, though he hopes more Vermonters will learn it's available.

"I think from a public education standpoint, even law enforcement isn't fully aware of the extensive circumstances that these orders can be granted," he said.

The types of people who could petition for an extreme risk order could also be expanded. According to the Giffords Law Center to Prevent Gun Violence, 17 states and the District of Columbia have red flag laws on the books. Vermont is one of just three of them — along with Florida and Rhode Island — that allow only law enforcement officials to request the orders. Some states permit family members, medical professionals and school administrators to do so.

Barsotti, the Bennington County doctor, would like Vermont's law to at least make clear that medical professionals can contact authorities when they believe a patient is at risk without violating federal privacy restrictions.

"Any time a doctor is in that situation, he or she is running a risk to the medical board and civil suit," he said. "States have to clarify for us when we can or can't report."

The legislature did pass a bill last session that would have accomplished Barsotti's objective, but it also included a 24-hour waiting period for all handgun sales. Scott, who had fought for the 2018 gun laws, vetoed the bill, saying that existing statutes were sufficient. At a press conference last Thursday in St. Albans, the governor again expressed reluctance to pass new gun laws, though he said he might be open to strengthening the background check process.

The legislature could attempt to override Scott's veto, but an earlier vote in the House suggested that such a move would fail. Either way, Sears and Baruth said they will continue pushing for a waiting period. And according to Baruth, the recent rash of mass shootings — and their impact on the presidential election — could keep the heat on next winter.

"I think it'll be a larger discussion this year — larger than people expect," he said.

Correction, August 22, 2019: An earlier version of this story misstated how long it has been since Vermont's gun laws were signed. It has been 16 months.