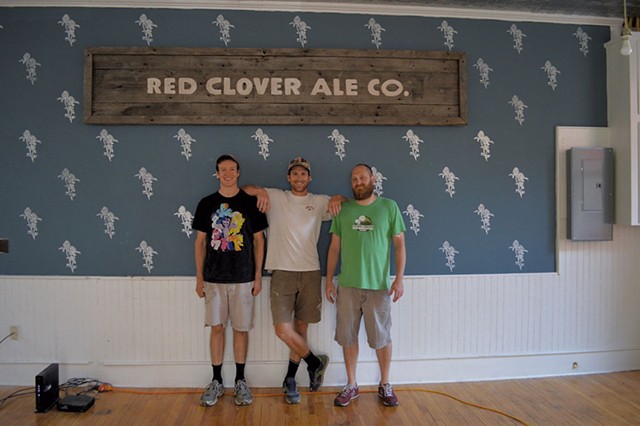 Brandon Village is home to many things, but a vibrant bar scene isn't one of them. So when Red Clover Ale Company opens a brewery-taproom at 43 Center Street this fall, it'll inject a welcome shot of sauce into the village culture.

According to brewery cofounder Pete Brooks, Red Clover will offer eight beers on draft, along with cans and growlers to go. Brooks co-owns the business with his brothers-in-law, Riker Wikoff and Andrew Gates.

Brooks and Wikoff hatched the brewery plan while comanaging the goat dairy at Consider Bardwell Farm in West Pawlet. Brooks' biology background — he grew up on a dairy farm and studied biology in college — is "coming in handy now," as is the food-safety experience Wikoff gleaned in Consider Bardwell's creamery, said Brooks, who's been brewing at home for the past six years. Gates, a former bar manager, brings the beverage service experience to the table.

As its name suggests, the brewery's three-barrel kettle will bubble mostly with ales. Hop-driven pale ales and IPAs will be one focus, though Brooks plans to keep alcohol contents low. "We try to make beers that are easy to drink," he said. "There's a sweet spot between 5 and 6 1/2 percent ABV."

Seasonal rotations will include summery, farmhouse-style ales, springy saisons and plenty of stouts. These will be sold on-site, with few exceptions. "Our business model is all on-premise," Brooks said. He hopes the brewery's quaint village storefront perched above the Neshobe River will entice drinkers to pull up a seat and stay a while.

"You look out the window, and the river's running underneath," he said. "A part of it is to make a place that's fun to hang out in."