Reckoning With Family and Identity Unites Plays in JAGfest 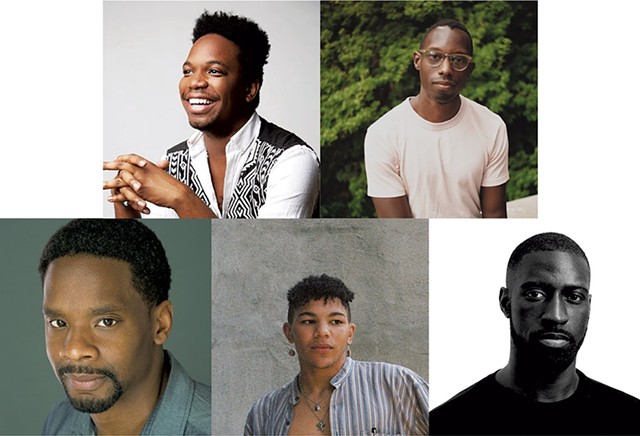 JAGfest, an annual theater festival that showcases the work of African American artists, returns to the Upper Valley this weekend for its fourth incarnation. Over three days, five playwrights present staged readings of new works, each followed by a postshow discussion. The Friday and Saturday performances are at the Briggs Opera House in White River Junction; on Sunday, the festival concludes with a show at the Hopkins Center for the Arts in Hanover, N.H.

JAGfest emerged from JAG Productions, which Jarvis Antonio Green launched in 2016. He first came to Vermont from New York City several years earlier for a recuperative vegetable-growing stint at Fable Farm in Barnard; there, he also directed a summer children's production of Rodgers & Hammerstein's Cinderella at BarnArts Center for the Arts, which he founded.

With the establishment of JAG Productions, Green has sought to develop voices that remain critically underrepresented in mainstream American theater. According to a study by the Asian American Performers Action Coalition, 95 percent of all plays and musicals produced on Broadway in the 2016-17 season were written by white playwrights.

Vermont, a state in which 94 percent of the population is white, might not seem the most obvious locale for a theater company focused on producing works by and about people of color. But, as Green told Seven Days in a 2016 interview, he feels both an existential and artistic imperative to tell these particular stories: "I need to speak my truth and tell my story, and that means telling the stories of black people."

In addition to bringing African American perspectives to a community that might not otherwise encounter them, JAGfest is an incubator for the talent that animates those perspectives onstage. And for the first time since its inception, the festival will feature a Vermont-based playwright: Isaiah Hines, an alumnus of South Burlington High School, will make his Vermont stage debut at JAGfest with "(Re)surface: A Poetics of Fish/Flesh."

Hines is no stranger to the spotlight; in his senior year, he led a successful campaign to change South Burlington's school mascot from the Rebels, on the grounds that it was an emblem of the Confederacy. His visibility in the effort made him a sudden public figure — the recipient of random handshakes and expressions of gratitude, as well as harassment, hate speech and a death threat.

Now a junior at Columbia University, Hines has channeled those experiences into "(Re)surface," a solo performance piece that explores black queer identity and his evolving sense of self.

"The writing process was really valuable in terms of allowing me to reflect on the events of the last few years," Hines said. "I feel like I'm presenting a much more complex version of myself and my sexuality, because my hometown isn't really a space for me to be my whole self. In a sense, I'm resurfacing in Vermont, in a new way and on my own terms."

To support Hines' creative process, Green paired him with JAGfest alumna Kirya Traber, an acclaimed playwright, actor and director, who will mentor Hines during the weeklong residency leading up to his Friday night performance. (Traber herself is at work on a musical about Gladys Bentley, a black lesbian performer of the Harlem Renaissance era, which Traber previewed at last year's JAGfest.) In addition to mentoring Hines and providing general guidance to the other playwrights and performers, Traber is moderating the talkbacks after each staged reading.

Jeremy O'Brian, a Brooklyn-based playwright who originally comes from Mississippi, brings A Curious Thing; or Superheroes K'ain't Fly — a tale of two queer newlyweds, Virgo and Aries, who confront their fears of parenthood. "It was largely informed by the deaths of black queer boys who commit suicide," he said in an Instagram video.

The Problem With Magic, Is:, by New York City writer and producer Johnny G. Lloyd, tells the story of two siblings who take over the family magic shop after their mother's death. They soon find themselves besieged by the dual forces of neighborhood gentrification and an inadvertently summoned snake deity, testing their commitment to the notion of home.

New York City playwright Sheldon Shaw debuts Cntrl+Alt(Right)Del, which explores the tensions that arise when a white woman brings her black boyfriend home to meet her family in their trailer park on the Gulf Coast of Texas. The cast features undergraduate performers from Dartmouth College's Department of Theater.

Keelay Gipson, a professor, activist and playwright whose accolades include a residency at the MacDowell Colony and fellowships with the Lambda Literary and Dramatists Guild foundations, is premiering Demons. The play revolves around a family grappling with the loss of its patriarch, exhuming past traumas and reconsidering what it means to live up to someone else's ideals.

This year, said Green, the plays seem to have coalesced around a theme of familial reckoning, which was less a conscious decision than a surfacing of his own inner reality. "I'm choosing not to hide behind the work anymore," said Green. "Over the past six months, what's been coming up for me is family — taking the time to go back and uncover and live in the discomfort of my past and my family, the joys and the heartbreak. So, as I'm reading these works, it all makes sense, because that's what's happening in my own life."

Though most of this year's plays address what can feel like heavy interpersonal chaos, Green resists categorizing them as dramas. "They're about magic and the future and decolonizing our minds from time and place and setting," he said. "I still get the profound stories, but I get beyond what I know and activate my imagination in a way I haven't before.

"And at the end, they make me feel taller, stronger, wiser, more curious," he added. "I feel a deeper love for humanity."