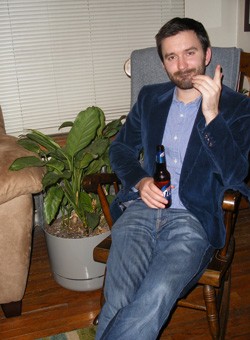 I don’t know about you, but I had a pretty funny weekend.

It started Friday night at the Upright Citizens Brigade touring company’s late show at the FlynnSpace — the last of four shows they did here last week. I can’t in good conscience offer any serious critical insight on the show, since one of my oldest and dearest friends, Ben Rameaka, is part of the group. I will say that I laughed a lot, and I would suggest that any time you have the chance to see professional improv comedy in the area, you take it. It’s a fascinating, and at times harrowing art form, the comedic equivalent of a high-wire act. I’d add that there are several burgeoning local troupes —most operating under the Spark Arts banner — carving out a niche for improv in Vermont who are worth checking out, too.

And if you do, I’d like to offer one small, humble suggestion: Stop being so damned Vermont-y.

Generally speaking, the emergence of comedy in the Vermont mainstream is a relatively new phenomenon. So, understandably, there’s been a bit of a feeling-out process for local audiences. I’ve had conversations with veteran local comics in recent years who’ve said they sometimes feel like Vermont audiences are still acclimating to the tone and atmosphere of a comedy show and are not always completely comfortable with it.

I’ve noticed it, too. There can be a certain stiffness, a hesitance to fully engage, to let your guard down and laugh at a well-crafted joke that’s maybe a bit off color, flat-out obscene or otherwise just cuts too close to the funny bone. Sometimes it seems local crowds just need to lighten up a little.

For example, at the beginning of the UCB show, the performers were working the crowd and riffing on local current events, such as the police shooting in the New North End and the F-35 debate.

Following a rather innocuous jab concerning the latter topic, a woman on the far side of the room shouted, a shrill tremor of genuine how-dare-you outrage in her voice, “But you don’t have F-35s in New York!”

(That sound you hear is me repeatedly slamming my forehead against my desk and knocking over my leaded VPR mug.)

Fortunately, the spectators at the final round of the Vermont’s Funniest Comedian contest at Club Metronome on Saturday were thicker skinned. And they were treated to a tremendous showcase of the state’s best and brightest standup comedians.

The 12 contestants, narrowed down from a field of 60 over three rounds by some influential judges — including two bigwigs from the Just for Laughs festival in Montréal and Boston-based comedian/producer Gary Marino — were, from first to last, very solid and even transcendent.

Justin Rowe, Adam Benay, Kyle Gagnon and Carmen Lagala were tabbed as finalists, finishing in that order, according to the judges’ tally. They took home an assortment of loot, including cash, free headshots and slots at next year’s Green Mountain Comedy Festival, among other goodies.

On any other night, you could have made a case for any of those comics as the overall winner. But this night belonged to Phil Davidson, who delivered a flawless set. I’ve been impressed by Davidson before, but he’s at a different level now. His jokes are crisp, clever and well timed and work seamlessly with occasional off-the-cuff one-liners — he had a few dandies, especially at the expense of the Canadian judges, who apparently didn’t take his barbs personally. His witty style kind of reminds me of John Mulaney, which ain’t a bad thing.

I was a bit surprised that last year’s champ, Kevin Byer, didn’t make the final cut. His set was certainly deserving. Ditto Will Betts, who turned out the best set I’ve seen from him, navigating some dark and deeply personal material while maintaining his unique, offbeat perspective. I would have placed both in the top five. Then again, I’d have a hard time choosing who wouldn’t have made it from the five who did. That’s a nice problem to have, and it speaks to the growing wealth of comedic talent in Vermont we’re lucky enough to enjoy … as long as they don’t joke about F-35s.

As you likely know, this Saturday, November 16, comedian Fred Armisen, of “Saturday Night Live” and “Portlandia” fame, is performing two shows at the Unitarian Universalist Church in Burlington. Because he’s Fred-freakin’-Armisen, you probably don’t need me to tell you why that’s awesome. Also, as of this writing, the late show is sold out and the early show is close, so a preview is a little redundant — if you’re going, you’re going. Instead, I’d like to pass along a quick true story in the spirit of “Portlandia” that I think Armisen would appreciate.

On Halloween night, I went to a friend’s house in Burlington’s Old North End to have dinner and pass out candy to trick-or-treaters. At one point, two young girls climbed the steps as another friend answered the door, candy bowl in hand. After dispensing with the formality of actually saying, “Trick or treat” — seemingly a lost tradition, from what I can gather, and I blame the parents — they began to paw through Reese’s and Milky Ways. After a minute or so, one of the girls turned her painted face up to the friend holding the bowl.

“I can’t eat these,” she said, visibly discouraged. Then, “Do you have any fair-trade chocolate?”

Congrats to local songwriter Hana Zara, who last week won the 2013 Advance Music Singer-Songwriter contest at the Higher Ground Showcase Lounge. Zara’s most recent record, Tatterhood, is one of the coolest local folk records you’ll hear this year and is on my short list for consideration as one the best Vermont albums of 2013. You can catch her at Radio Bean this Sunday, November 17.

While you’re at it, you can check out another AMSSC winner at the Bean this weekend. Giovanina Bucci is a Plattsburgh-based songwriter who won the 2011 contest. She’s got a new album out, The Road Home, which we’ll review in coming weeks. In the meantime, catch her at the Bean this Saturday, November 16. She’s also at Red Square on Friday, November 15.

Meanwhile, in Montpelier … indie record shop Buch Spieler is becoming something of a hotspot for cool live music in the capital city. This Friday, November 15, the Langdon Street store hosts Anachronist, who have become one of my favorite Montpeculiar bands since their excellent 2012 record, Row. In a recent email, bandleader Brian Clark writes that the band will test drive some new material that should appear on a new record later this winter.

Last but not least, we were saddened to learn that Warren Hardy passed away last week. For the unfamiliar, Hardy, 57, was an owner of the fabled Queen City nightclub Hunt’s back in the 1980s. In recent years, he hosted a weekly radio show on the online station WBKM.org, “Hunt’s Revisited,” which highlighted Vermont music from that era and drew connections to the current scene. It was a great listen, both for anyone nostalgic for the past and for those who, like me, missed out on that generation but appreciate local music history — and great local music.

You’d be hard-pressed to find a more supportive and enthusiastic patron of the Vermont music scene than Warren Hardy. He was a local treasure and he’ll be missed.

SWFs, Let It Be Told