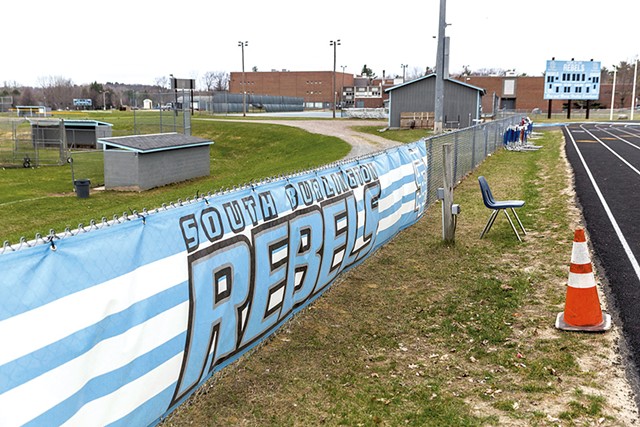 Some South Burlington "Rebels" are living up to their nickname. Resistance has grown steadily in Vermont's second largest city since the local school board decided in February to call its sports teams something less controversial. Defenders insist the "Rebel" moniker is not specific to Confederate soldiers in the Civil War and therefore shouldn't offend anyone.

South Burlington voters have already rejected their school budget — twice — and that may have something to do with the organizing efforts of the Rebel Alliance. Now the group has gathered signatures from 5 percent of the city's registered voters to bring two ballot questions to the public: The first would instruct the board to restore the Rebels name; the second would forbid the board or the city council from spending public funds on the name change.

Two South Burlington grads started the Rebel Alliance, but neither currently lives in Vermont. Kiya Batmanglidj is a 1986 alumnus who works as a staff member of the congressional House Appropriations Committee in Washington, D.C; Corey Mansfield, a member of the class of 1996, is a salesman in Clifton Park, N.Y.

Mansfield played youth football and remembers meeting Batmanglidj back when he was a volunteer coach in the early 1990s. The two reconnected over their fondness for the Rebels name on a South Burlington alumni Facebook page.

"I don't think it's racist. You look at the word 'rebel.' The country was built on rebels," Mansfield said, referring to the American Revolution.

They felt strongly enough to launch the Rebel Alliance Facebook Page, and "within 24 hours we had 1,800 members," Mansfield recalled.

Its focus has grown, too, encompassing issues such as taxes and terms of the teacher contract, which is now under negotiation. Last month, the Rebel Alliance registered as a political action committee with South Burlington residents as officers.

"There's definitely a high tax rate in SB," said Batmanglidj, a former U.S. Army paratrooper who identifies himself on Facebook as a National Rifle Association member and proud supporter of President Donald Trump. "Maybe there's been some festering, you know, angst about the tax rate and the budgets and all that. And maybe the Rebel Alliance group kind of channeled all that."

Batmanglidj came to Vermont from Iran with his family as a child in the 1980s. He said he supports the name out of loyalty to a community that embraced him as a youth. While neither he nor Mansfield lives in South Burlington anymore, their relatives do, and the two men said they still feel a strong attachment to the city.

Vicki Garrison of Essex — administrator of two Facebook pages, including "Rebel Name Retirement: Our Voice" — got involved in the Rebels debate for an altogether different reason.

"I'm black in Vermont, and that's enough," she said via email. "Racism has no boundaries."

"As a black person, to ask me to accept the Rebel name is to ask me to deny the truth and pain of my ancestors, our black ancestors, which I will not, cannot, and should not be asked to do," Garrison added.

It's unclear why the district adopted the moniker after the school was founded in the early 1960s. Whatever the origin, symbols of the Confederacy crept in: Students waved Confederate flags at games and clapped as Captain Rebel marched onto the football field at halftime. The school board banned the flags and the captain about 20 years ago during an earlier go-round in the debate, but kept the name in a compromise.

Renewed objections came from 18-year-old Isaiah Hines. As an appointed student representative on the school board, the African American teen spoke out against the moniker and later celebrated the board's decision to finally drop it.

His advocacy led to an alleged confrontation with a man who had argued to keep the name. According to a police affidavit, Dan Emmons, 43, accosted Hines in a local store and told him, "You're shitting in the wrong yard." The affidavit also says Emmons later sent Hines a Facebook message warning him to keep the conversation private, threatening to reveal images from social media. One showed Hines flipping the bird, and another depicted a friend of his with what appeared to be drugs.

Emmons, who pleaded not guilty Thursday to stalking, said that he was being targeted for political reasons.

Hines declined to comment for this story. He listened attentively but did not speak at a packed school board meeting last Thursday in the library at Frederick H. Tuttle Middle School.

"I see so much anger and unhappiness, and it's sad," attorney and former school board member Rich Cassidy told fellow residents at the emotional gathering. He expressed support for the school board's decision to drop the name and asked publicly how to "achieve healing."

Others had fighting words for the school board. Stacey Savage, a member of the Rebel Alliance, said it must be more accountable to the public.

"We're just not going to take it anymore," Savage said.

Several speakers urged the school board to keep the Rebels label, if only to avoid seeing the budget defeated a third time by Rebel Alliance members. "Leave the name to another day if you want," said Carol Elliott, a longtime South Burlington resident.

Others disagreed. Jim Leddy, 75, a former state legislator, said he was going to "confession" in public by admitting he voted against the first budget over concerns about the size of the spending increase. But he urged the community to come together and support the school board, including what he called its long-overdue decision to dump the Rebels. "I've been opposed to that name for years and years and years," he said.

Leddy noted that when he attended Rice Memorial High School on the other side of South Burlington, the Catholic school's mascot was the Little Indians. In 2004, the school dropped the name in response to criticism regarding racial stereotyping and adopted a new mascot — the Green Knights.

Controversy ensued, but people adjusted, Leddy told the crowd. The same thing will happen in South Burlington, he implied. It's time to stop seeing "Rebels" as a bonding force, because it's not, Leddy said.

"We are much more than that name," he said.

Vermont has seen its share of mascot controversies. In 2005, Champlain Valley Union High School in Hinesburg dispatched the Crusaders for a new mascot, the Red Hawks. Critics pointed out the violence and religious persecution that accompanied the Crusades, as well as the questionable use of a religious symbol — a cross on a shield — as part of the public school's mascot imagery.

Other schools have compromised. Brattleboro Union High School stopped using an image that some said looked like a Southern plantation owner as its mascot, but kept the Colonels as a name.

The controversies will likely continue, said Bob Johnson, associate executive director of the Vermont Principals' Association, which oversees high school and middle school sports. Schools favor mascots that are perceived as strong, he said. He's had many conversations with athletic directors about questionable mascots.

"They really don't stop to think about, 'Well, what does the name really mean; how is it being portrayed, and is it offensive to people?'" he said.

Several schools around New England have Confederate-associated mascots. It's an odd embrace, given how many northerners died fighting the Confederacy and its institution of slavery.

Howard Coffin of Montpelier, author of books about the Civil War, theorized that the Confederate mascots might have surfaced out of ignorance. Schools weren't teaching much Civil War history back in the 1950s and 1960s, he said, when many of Vermont's current union high schools were formed and adopted mascots.

The discussion today should be particularly attentive to concerns raised by black people, Coffin said.

"They were the victims of American slavery. And if any of them, if any blacks today are troubled by any of this, get rid of it," he said of the mascots.

It's unclear whether South Burlington's school board or its city council will decide to bring the Rebel Alliance petition questions to voters. State law says the questions should be warned for votes within 60 days of signatures being certified by the city clerk.

But the law also gives local bodies some discretion to deny petitions.

The South Burlington City Council once refused to put an abortion parental-notification question on the ballot, arguing that the question was about state law — and not a local decision. The Vermont Supreme Court upheld that position in 2007.

School leaders say they are seeking legal advice on the issue, and the board was expected to discuss the matter in an executive session during its Wednesday, April 19 session.

As Batmanglidj sees it, people deserve a direct say on the Rebels debate. He said, "It's about making sure that people have a chance to express themselves."