Feasting - or not - with Vermont's immigrant farm workers 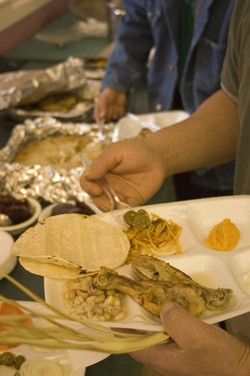 In Mexico, they say Hay más tiempo que vida. Literally translated, the maxim means, "There is more time than life." But to 26-year-old Jorge and his younger brother Gustavo (not their real names), that probably sounds like wishful thinking. Aside from weekly interactions with local volunteers, the frenetic pace of the men's seven-day workweek on a Vermont dairy farm is rarely broken by anything but sleep. And meals.

"In Mexico, you work, then you come home to eat," Jorge says in a chatty Spanish while tracing circles on his kitchen table. It's Thursday afternoon, and the brothers are enjoying a two-hour lunch break after their first milking shift, which started at 5 a.m. But spare hours, for undocumented migrant workers, rarely translate into elaborate feasts. "In Mexico," Jorge points out, "it's not customary for men to cook."

As the only two Mexican workers on this Champlain Valley dairy farm, Jorge and Gustavo occupy a peeling house a few yards from the milking barn. Two bros in a crash pad? Only sort of: Our iconic American image of the Single Bachelor would be regarded as something of an oddity in Mexico. "At home," Jorge clarifies, "you live with your family until you get married." It's no surprise, then, that the only visible food in this kitchen is a half-empty bottle of vegetable oil, a tin of hot cocoa and a blistering peeled onion. A stack of day-old dishes rises precariously from the sink.

As a former ESL teacher, I'm not surprised by the haphazard appearance of the men's domestic environment - or, for that matter, their indifference to it. Jorge and Gustavo smirk when asked about their cooking, as if it's the first time they've stopped to think about it. "Some of the other [Mexican workers] like to cook and clean," Jorge observes. "I might, too, if I had the time."

Jorge, friendly and mustachioed, has worked on four other Vermont dairies: I consider him to be the de facto spokesman for his reserved, 20 year-old brother. But apparently Gustavo is the more seasoned traveler. He left his home in the state of Tabasco at 15 to do manual labor in Atlanta, then moved to Vermont last November. Gustavo grins sheepishly as Jorge explains that they sometimes call their mother and sisters in Mexico for advice on cooking chicken. "But it never comes out the same!" Jorge adds.

In fact, there's a serious side to Jorge's breezy anecdotal commentary. Both men admit that their lack of culinary know-how sometimes gets them into gastronomic trouble. "In Mexico, I never got sick - maybe a sniffle or a head cold," Jorge says. "Here, I get stomach aches."

Midway through our conversation, Gustavo rises abruptly and retires to his bedroom. "He has a fever," Jorge explains. "He needs to rest before our next shift."

Two days later, I see the brothers again - but this time, in a quaint, wood-beamed local church. It's Saturday in mid-April, and sunny - the first spring-like day of the year. Blueish light filters in through stained-glass windows. An American flag hangs limply on the altar beside a marble statue of the Virgin Mary.

This monthly gathering has been organized by a countywide coalition of farm owners and worker advocates. Of the 30 people in attendance, perhaps 10 are Mexican, and most of them sit together in the back rows. Despite their jeans and denim jackets, these young men look pretty spiffy - slicked-back hair, tucked-in shirts, a few fancy watches. Jorge brought his Nike hat, but has removed it out of respect.

A local pastor begins the ceremony in near-perfect Spanish, and the men follow his directions to rise, then kneel. Every few minutes, a local gringa by the altar strums chords on a guitar, and a female farm worker shakes a rattle in accompaniment. Her small daughter - a legal U.S. resident - clutches at her Sunday dress and stares into the crowd with big eyes.

"Te comparto mi mesa . . . te comparto mi pan . . . " they sing. (I share my table with you . . . I share my bread . . .). The Mexicans hum along shyly. Every few minutes, Jorge and Gustavo snicker quietly to each other over some brotherly secret. I wonder, What are they laughing about?

After the service, the crowd filters into a nearby community hall for a potluck supper. But the spread awaiting them is a far cry from "authentic" Mexican - whatever that means, in this climate. Instead, the dishes illustrate a buffet of cultural ironies. A Mexican-émigré college professor, I learn, provided the French bread and smoked salmon. Another brought a carton of Dunkin' Donuts. One farm owner baked a chicken pot pie. There's also a steaming array of Thanksgiving-like side dishes and sweets: cranberry sauce, mashed potatoes, two kinds of chocolate cake.

Of course, there are a few Mexican, or at least "Mexican," touches. In the center of the spread sits a spicy, broth-like soup with chopped-up pieces of hot dog, prepared by the female Mexican farm worker. By the salmon are a few stray jalapeños and diced onions - a customary garnish for countless Mexican dishes. Next to the pot pie is a tall stack of store-bought corn tortillas, all of which have been crisped on the type of griddle that's typically used to cook pancake breakfasts.

Just before the pastor says grace, Jorge and Gustavo's employer brings out a tray of Italian-style chicken and a bowl of spaghetti and meatballs with marinara sauce. "I know Jorge and Gustavo love Italian," she asserts. "Whenever I bring them to Subway, they always order meatball grinders." It turns out that she also brought the tortillas - but only by chance. "I happened to see those when I was out shopping, and I know they're the ones the men like," adds this patrona, or boss.

The pastor, a warm, balding man who once worked as a missionary in Bolivia, calls the group to order. Everyone stands up behind a horseshoe of folding tables to say grace. Then the food gets ladled out into plastic soup bowls and plates.

I return to my place at the table with a bowl of hot dog soup and a stack of three tortillas - the closest approximation of a "traditional" Mexican meal I can assemble. For each bite, I tear off a chunk of tortilla and use it as a kind of spoon, as I was once instructed to do in southern Mexico. After a minute of slurping, I look up at Jorge and Gustavo to see how they're enjoying their meal.

"Ya comí," Jorge explains quietly, as he picks at a slice of chocolate cake. (I ate before I came.)

Though his patrona gave him some rare time off this week to recover from his fever, Jorge's brother still looks a little pallid.

I can tell: His cake looks untouched.

When all the paper plates have been stacked and trashed, Jorge brings the garbage into a prep kitchen and ties it up. Then he and Gustavo stand by a window and exchange the common currency of their diaspora - phone cards and soccer magazines.

". . . With soccer, it doesn't matter if you're short or tall," Gustavo is saying, having perked up from all the sugar. "But with basketball, it does."

Then one of the professors crosses the room to speak with the brothers about passport applications: Mexico's Consulate General will visit Vermont in May, and he may be able to speed the process along. The professor adds that it's easier to apply for one from within the U.S., rather than once you've already returned to Mexico. Both men politely decline the assistance. Gustavo, for one, lost all his papers in Georgia, so he no longer qualifies. Jorge carries a Mexican voter registration card, but isn't interested; he plans to return home in July.

By now, it's early afternoon. Most of the churchgoers have already filed out of the hall and into the street. Sunlight streams through the windows, and the air inside feels stuffy on the backs of our necks. Summer heat in Vermont will be more intense than in the brothers' more temperate homeland.

"Ya te cansaste?" the professor asks Jorge, whose figure is now back-lit by the windows. (Are you tired of living here?)

"No estás contento?" (Are you unhappy?)

Jorge looks up. Then he says in a voice that's plaintive, but not quite despondent, "No es lo mismo." (It just isn't the same.)