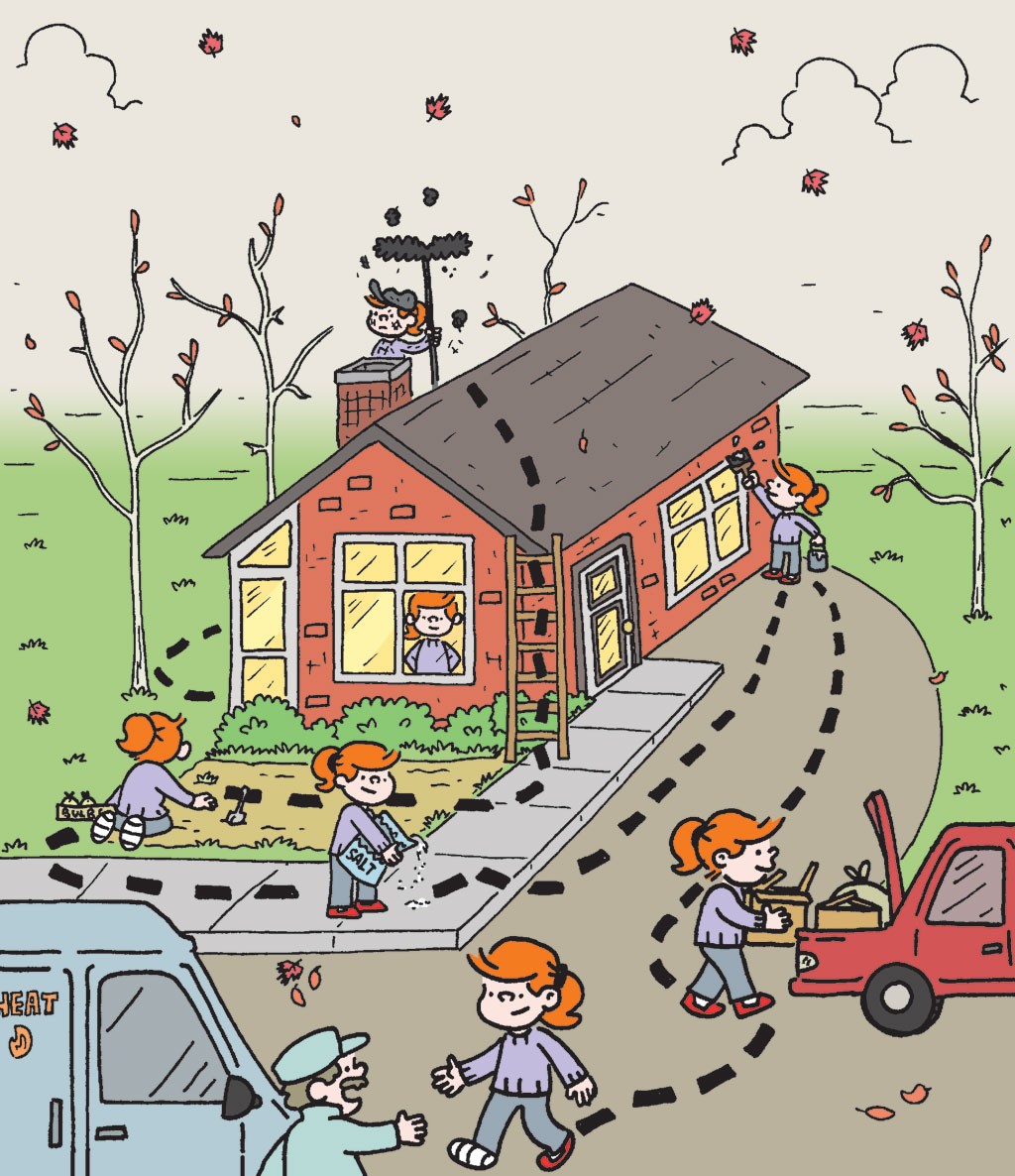 So your house has finally reached maximum capacity. When you bought that cozy two-bedroom, one-bathroom ranch, you were single and had more space than you needed.

Fast-forward 10 years. Now you've got a spouse, two kids, a dog and enough garden tools and sporting goods to start a summer camp. The kids share one bed, and the novelty of the entire family crowded into a single bathroom each morning has worn thin.

In short, it's time for new digs. But not many sellers want to put their house on the market in the winter, when much of its curb appeal is buried, like the curb itself, beneath three feet of snow.

Fear not. Vermont's real estate professionals say there's a lot that sellers can do in advance to prepare their house for sale in the spring — or sooner, if they're willing to list it in January and February. Because many of these projects take time and money, the experts recommend starting soon, so the "For Sale" signs can sprout with the crocuses.

1. Let there be light

Before the weather gets too cold, rake out gardens, stow empty flowerpots and store patio furniture, recommends Robbi Handy Holmes, a real estate agent with Century 21 Jack Associates in South Burlington. Though lawns and gardens never look their best from late fall to early spring, putting down fresh mulch and hanging a seasonal wreath on the front door can add a splash of color to an otherwise drab-looking exterior.

Ditto for repairing screens and washing windows before the mercury falls below freezing. Shiny windows and open blinds not only brighten a house, Handy Holmes says, but also make it look bigger. As she puts it, "It's all about first impressions."

Your prized collection of miniature lighthouses might be worth thousands on eBay, but you'd be hard-pressed to find a real estate agent who's ever sold a house based on its abundance of knick-knacks.

For spring sellers, fall and winter are excellent times to box up those dust collectors, pore through the basement and closets, and purge one's home of old clothes, books and other household items that won't go to the next house. Clear off countertops and store or toss the clutter.

"We all have our clutter spots, and it's hard to live in a house and sell it at the same time," Handy Holmes says. "But it's impressive to walk into a home where it looks like the seller really wants to sell."

3. Freshen those walls — and lose the wallpaper!

After you've decluttered, a fresh coat of paint is the cheapest and easiest home improvement project there is. Audette suggests neutral colors, such as off-white or cream, and recommends getting rid of wallpaper, especially if it's peeling, and replacing it with a solid paint job.

4. Know before you go

The last thing a seller wants is to learn about a major deficiency in a house's roof, plumbing, foundation or electrical system after that house is under contract. A building inspection in advance lets you know exactly which problems may lower your asking price — or scuttle the deal entirely.

In some cases, new laws and building codes have been added since the house last changed hands. For a Vermont house that hasn't sold in at least a decade, they include laws related to photoelectric smoke alarms, carbon-monoxide detectors and overflow tanks on water heaters.

Audette also advises that if you're planning to sell your house, you should make an appointment to get it inspected by the fire marshal — another requirement prior to sale.

As homeowners head into winter, Audette suggests that homeowners get their furnaces and chimneys professionally cleaned and inspected. If the house has an oil tank, get it checked and certified by a professional — another new requirement before sale in Vermont.

6. Get your paperwork in order

The vast majority of people who sell their house buy another one. All the real estate experts agree that if you're planning to buy as well as sell next year, it behooves you to get your paperwork and finances in order in advance. That means everything from obtaining copies of your existing mortgage and deed to obtaining preapproval letters from a lender.

Also, if you've done any exterior work, such as additions or new decks, check that you've obtained all the necessary permits — and ensure that they're on file with your town or city clerk.

While most sellers prefer to wait until their front lawn is lush before planting a "For Sale" sign on it, Marla Woulf, director of marketing at Lang McLaughry Real Estate in South Burlington, points out that many sellers now list their homes throughout the winter. Why? Because buyers are out there, especially after years of sluggish sales.

This year, Woulf notes, while the Vermont housing market peaked at about 9,800 homes for sale in July, 7,500 homes were for sale in January. And, while 620 houses sold in July, the busiest month for buyers, 354 moved in January. In short, she says, people who house-hunt in winter are often more motivated to buy, owing to a new job or other life transition, and may be willing to pay more.

"People think that nobody is buying real estate over the winter," Woulf says, "but that's just not true."

If you are selling in winter, she says, puts lights, inside and out, on timers and post seasonally appropriate photos of the house online. Also, if your house is already empty, turn on the heat, at least while potential buyers are walking through it.

"I've been to some of those houses where the heat is off," Woulf says, "and people don't stick around too long."

Even if your house doesn't sell in the winter, having it on the market leaves you better positioned to attract buyers who will return with the robins of spring.