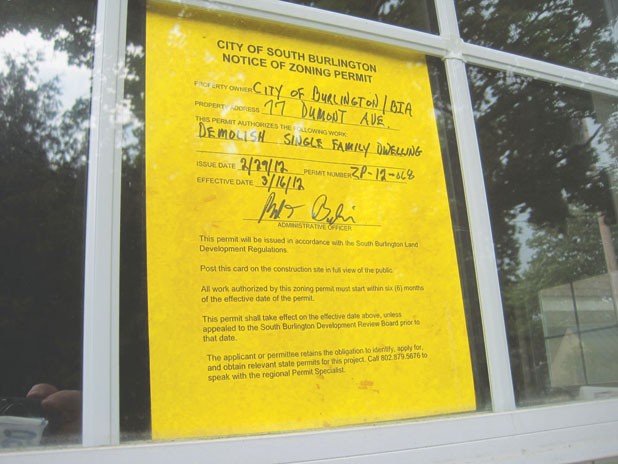 A new study by a Burlington-area development agency claiming that airport noise has had no effect on home values is “significantly flawed and should not be relied on,” a local real-estate expert says.

The Greater Burlington Industrial Corporation, which favors deployment of the F-35 stealth fighter at Burlington International Airport, maintains in a 22-page report issued last week that sale prices of homes “have not been adversely impacted” due to their location in high-noise zones near BTV.

The study seemed to undercut a key argument made by opponents of basing the F-35 at BTV’s Air National Guard station, namely that noise produced by the planes would sharply reduce the value of affected residential properties.

The report, which GBIC touts as “very comprehensive,” was prepared by the nonprofit economic development group’s president, Frank Cioffi, and two of his colleagues. They are described in the report as having “collective, vast and accomplished economic development and real estate experience in northwestern Vermont and the state of Vermont.”

Cioffi said in a follow-up interview that he rejects the criticisms made by Allen and Greco. GBIC stands by its study, Cioffi added, because, he said, home sale prices inside the noise zone are based on estimates from two independent appraisers.

“There’s nothing wrong with [the study],” Cioffi says.

In drawing its conclusions, the GBIC study examined home sales during the past 10 years in parts of Winooski and South Burlington that experience airport-related noise levels in excess of what the federal government defines as tolerable.

The data on which the Winooski analysis rests are “extremely small” and thus “statistically unreliable,” Allen says. In seven of the 10 years studied, no more than five residential properties changed hands in the Onion City’s high-noise zone, Allen notes.

But the largest apparent flaw in the GBIC assessment pertains to its interpretation of home sale prices in the section of South Burlington closest to BTV. There, the Federal Aviation Administration has agreed to finance the purchase of homes from private sellers at what amounts to market value for a South Burlington home. Over the past decade, the FAA has purchased about 90 houses in that designated excessive-noise zone. Subsequently, they were either demolished or slated for demolition.

Only nine homes in that area were sold to private buyers during the years included in the GBIC study.

The FAA is allocating funds to BTV to purchase 14 additional homes inside the high-noise zone in the coming year. The airport will pay between $250,000 and $300,000 for those properties, says Bob McEwing, the airport’s director of planning and development The sale prices are based on appraisals of comparably sized homes that have sold recently in Chittenden County, with a focus on South Burlington houses that lie outside the high-decibel zone, McEwing says.

The neighborhood around the airport has been steadily emptied of residents. Vacant lots are now common in the zone, as are condemned houses awaiting demolition. Some of those properties have been vandalized.

GBIC takes no account of the effect of a federal agency offering top dollar for homes that would otherwise be unlikely to find buyers — even at steeply discounted prices. Allen writes in an email: “Only sales that were ‘conventional’ market transactions, sold without the influence of the federal buyback program, can be considered appropriate sales for inclusion in the analyses.”

Greco adds: “These homes were not purchased by individuals for residential use despite the airport noise. They were purchased under a federal program for destruction because of airport noise. Using these home sales as evidence that aircraft noise does not affect home values is an incredulous argument.”

Allen notes in a disclaimer to his critical appraisal of the GBIC report that he owns a home in Winooski that would be affected by the increased noise expected from the F-35. “I am opposed to the F-35 basing because I feel it will have a devastating impact on our community,” Allen says.

The city of Burlington and the Air National Guard should be eager to have a well-documented and objective economic study of the impact of airport noise on property values, Allen suggests. “Ultimately,” he remarks, “they will be legally obligated to compensate property owners for damages.”