According to 2015 estimates from the United States Census Bureau, only 1.8 percent of Vermont's population is of "Hispanic or Latino" origin. So if the Green Mountains are left wanting for Mexican food that resembles actual fare south of the border — or Mexican cuisine in California or Texas, or even Brooklyn — that's understandable. While I'm down with the gringo tacos on offer from Burlington to Brattleboro (I call them "Ver-Mexican"), I'd pretty much given up on finding legit Latin American eats here in my home state.

Enter Casa Aguilera Trading Company, which opened on St. Johnsbury's Eastern Avenue in May. "Mi casa es su casa," reads a sign near the door — "My home is your home." The walls are painted a saturated yellow; the tables topped with rainbow-striped Mexican blankets beneath cut glass. Folk-art paintings of men in sombreros and women with braids decorate the walls, and ceramic tchotchkes line the windowsills. On the airwaves, Spanish accordions accompany throaty singers, chortling of lost love's laments.

Owner Manuel Aguilera grew up in Pasadena, Calif. But his mother was from Zacatecas, Mexico, and she raised him on her native cuisine. "My childhood memories consist of these aromas filling the house," he said, stealing a moment to chat with a reporter last week. Aguilera recalled saucy stews simmered for hours and served with rice and beans; meats and crumbly white cheese rolled into corn tortillas and fried in crackling-hot oil on a stovetop skillet.

Last Friday, the cook was up before dawn; by 4 a.m., he'd stationed a smoker trailer in a parking spot in front of the restaurant. Under the hood, Vermont-raised briskets, pork and cheese-stuffed jalapeños soaked in smoky flavor as Aguilera fed wood to the machine. Later, he'd roll those meats into tacos and burritos during Casa Aguilera's three-month birthday celebration.

Why celebrate a mere three months in business?

"We're just starting to hit our stride," the owner said. He admitted that schooling cooks in homespun Mexican cookery — and adapting his mother's recipes to a modern New England palate — has been a challenge.

See, Aguilera is not a restaurant guy.

For decades, he worked in health services. He processed labs, scheduled appointments, drew blood. A couple of years ago, he and his wife, Holly Smith-Aguilera, moved from California to New Hampshire — she's from Marshfield, and both were tired of traffic-strangled SoCal. Manuel Aguilera struggled to find work in his field, but he got busy in the garden. In 2014, he grew heirloom tomatoes, peppers and tomatillos. He made them into salsas, which he sold under the name Casa Aguilera Trading Company.

The couple moved to Hartford, and Aguilera found work at Dartmouth College, but the salsa biz was taking off. The business grew to include workshops focused on preserving summer produce and healthy eating. "It was a challenge to keep up," Aguilera said. In addition to working full time and selling salsa, he was also house hunting.

When the Aguileras' real estate agent shared some Casa Aguilera chips and salsa around the office one day, a colleague — who just happened to own a vacant restaurant in downtown St. Johnsbury — wondered whether Aguilera would consider opening one there.

"Of course I had no interest in that whatsoever," the cook recalled. He was content with his job and planned to keep it until retirement.

But he agreed to go check out the space and, in May, when the Aguileras moved into their new home in Waterford, they took the restaurant, too.

Behind the bar, glass jars hold cooling, sweet aguas frescas made with fresh herbs and watermelon, honeydew, cucumbers or strawberries, while Jarritos sodas and beers from Vermont and Mexico chill in the cooler. There's also horchata — an icy rice-and-cinnamon drink — along with sangria and other wines.

Casa Aguilera is still ironing out its menu. Some nights may bring handmade tamales or huaraches (fried masa cakes topped with meats, sauces and cheeses), while others might entail enchiladas blanketed in red or green chile sauce or dark, smoky mole. At lunch, it's tacos, crispy-fried taquitos and savory empanadas — Aguilera makes the shells with lard in the traditional Mexican way — stuffed with chicken, beef or chorizo and cheese. Sweet versions of the pastry cradle grilled peaches, blueberries, raspberries and other fruits, depending on what's in season.

The dish recalled snacks I've enjoyed at gritty roadside taco stands in Mexico. Except that these taquitos, made with fresh produce and high-quality Vermont beef cut at nearby Northeast Kingdom Processing, were fresher, crisper and altogether better — what roadside taquitos aspire to be.

And the tacos? Soft, palm-size corn tortillas scattered with cubes of pork and cilantro. Again, the desert flavor was all there. The grilled pork, which Aguilera flash-fries to order, whispered of orange-cumin marinade; its crisp outer crust gave way to meat that fell apart in tender bites. The pickled carrots, onions and radishes on the side lent brisk, spicy crunch. 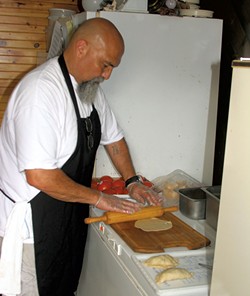 Aguilera's food stands in sharp contrast to the cheese-shrouded, cream-smothered, overdone tacos found at neo-Mexican joints up and down the East Coast. "These are all very simple, traditional recipes," Aguilera said, noting that his food lacks many of the toppings and accoutrements that Vermonters may have come to expect at "Mexican" spots such as Taco Bell, Chili's Grill & Bar and Chipotle Mexican Grill. "Mexican tacos don't have cheese and tomatoes," Aguilera said. "They have cilantro and onion, and that's it."

The cook, who is soft-spoken and greets his guests with an open, friendly demeanor, seems to enjoy introducing them to his native cuisine. "I have to educate people," he said, recalling the night he served a rich, chocolate-laced stew called chile Colorado. "It's tantalizing to your taste buds," he said. "You get the chile, then this bittersweet chocolate and [stewed] beef and pork."

But no one was ordering it. So the cook started handing out samples, which turned into requests for chile Colorado burritos, tacos and salads. And people wanted to know more about the flavors. "People are asking questions; they're inquisitive," Aguilera said.

As I finished my meal, Aguilera stood near the host stand, looking out over the dining room with a satisfied smile. "How was everything?" he asked as I approached the door.

I paused, and he extended his hand for a firm embrace that felt more like a hand-hug than a shake.

"Really, really good," I said, beaming back at him, feeling like — after years of pining for real-deal Mexican food in Vermont — I'd finally found what I'd been looking for.

The original print version of this article was headlined "Comida Típica"