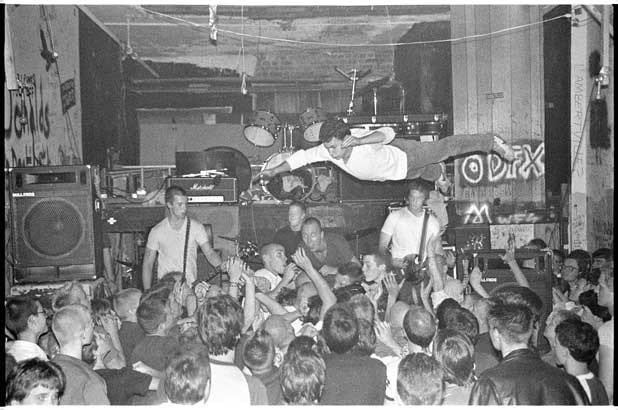 Unlike jazz, rock or even punk, the early history of American hardcore music is largely undocumented. Though books such as Steven Blush’s American Hardcore: A Tribal History tell an important part of the story, because the genre was — and in many ways still is — a distinctively underground phenomenon, piecing together a comprehensive history is immensely challenging.

Four years ago, Nathan Nedorostek (a former Jager Di Paola Kemp employee, now an art director in Brooklyn) and writer Anthony Pappalardo set about rectifying the issue. Specifically citing omissions from American Hardcore as inspiration, they began compiling a visual history of the genre and culture that would fill some of the holes Blush left open. The fruit of their intensive labors is a new book, Radio Silence: A Selected Visual History of American Hardcore Music, which hit bookshelves in October.

More archival compendium than textbook, the book is a stunning collection of photos, show posters, album covers and T-shirts documenting a critical era of American music history. And the stories behind the photos are often as compelling as the images themselves.

Seven Days recently chatted with Nedorostek by phone, in advance of an exhibition of selected photos from Radio Silence at JDK’s Sanctuary Artsite this Friday. The exhibit will mark the first time many of these images have been presented professionally — most originally appeared photocopied in ’zines or on show fliers, if at all.

SEVEN DAYS: What, specifically, do you feel was being left out of American hardcore history books?

NATHAN NEDOROSTEK: Well, American Hardcore came out and they kinda just said the whole scene ended in 1986, which is not the case. And it didn’t have as many visuals. [Hardcore] is such a visual culture, everyone was producing things. So we kind of set out to fill all the holes that we felt American Hardcore didn’t cover.

SD: That seems like a daunting task. Where did you start?

NN: We obviously couldn’t start at a library. We started with what we knew in our collections. We started referencing other media, books, and just went through millions of drafts of where we thought it was going to go, and the ideas we thought we could communicate properly, and who we could talk to and what was available.

One of the more interesting things about the photographs is that a lot of these people who shot [them] aren’t looking to be found, necessarily. They’re not hiding. But with the Internet, there’s a lot of people putting the photographs up. And quite a few people have books out now of their photographs. And that’s 99 percent not the case for everyone that we featured in the book.

SD: Sounds like there was some serious sleuthing involved.

NN: We were doing an interview at the Dischord House with Ian [MacKaye, Minor Threat, Fugazi], and we’re going through these [pictures of Black Flag], because he knew Henry [Rollins] and he was so excited because he’d never seen them, and they hadn’t been printed anywhere else. So we’re going through these images and looking at the graffiti on the walls, what people were wearing, set lists. And he was saying it was probably Black Flag’s first tour with Henry based on the tattoos he had, or lack thereof. So we could put a year on it.

We figured out through a couple of other photographs we had, and through a ’zine, that the club was in North Carolina. So we narrowed down what clubs Black Flag might have played at then. And then, through a much more detailed process just like that, we found out the guy’s name and the town he’s from . . . And then we got his ex-girlfriend’s MySpace address, and she gave me an email address for him in Massachusetts.

NN: I would say that happened with roughly 50 percent of the images in the book. Give or take a few contacts.

SD: Where do you see this book in the pantheon of American hardcore history?

NN: It’s by no means the be-all, end-all book of what hardcore was. Like the title says, it’s a selected history. And I hope it’s objective enough to let the readers form their own opinions about what the music and the culture was. It was so much more than just music or records or a T-shirt. It was about being there and participating and just being a part of the scene, for lack of a better word.