Readsboro, Writing and 'Rithmetic: Fears Grow Over the Future of Small Schools 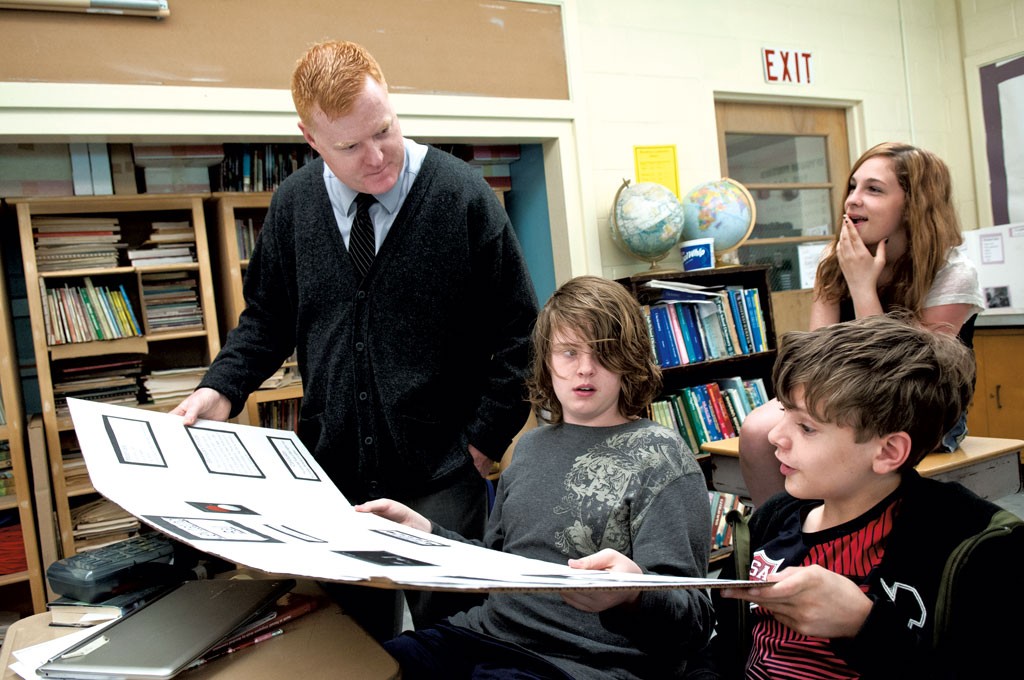 Readsboro is a tiny town on the Massachusetts border, about as far from the Statehouse as you can get and still be in Vermont. Yet its residents are making their voices heard in Montpelier.

Fearful that an advancing education bill would rip the heart out of their community, townspeople mobilized at the Readsboro Central School on a Saturday in mid-April. Some 50 or so citizens pleaded for help from their two Bennington County state senators, both of whom attended.

They talked about how the school, where 58 students attend pre-kindergarten through eighth grade, is the center of the community; the importance of the individual attention students receive from teachers; and the fact that parents stop by daily. "I was really proud to be part of our community that day," said Susan Edgerton, a Readsboro school board member who was there. "We really rallied."

The next week, when Sens. Brian Campion and Dick Sears — both Democrats — returned to the Statehouse, they had newfound resolve: H.361, the education bill that seeks to consolidate Vermont's 272 school districts, could not be allowed to crush small schools.

"It was a good reminder of the value of small schools. We should be working to make sure they can thrive," Campion said.

"I'm going to try to make what I consider a bad bill better," Sears vowed.

By the time the Senate voted last week on the education bill, Readsboro had been cited numerous times during debates as an example of a school imperiled by the House measure. Senators responded by altering the House's version, softening the push for school-district consolidation.

Campion, an eager-to-please freshman senator who serves on the Education Committee, and Sears, a brash veteran with a seat on the powerful Appropriations Committee, pushed for some of the changes.

"The problem I have with the bill is, it starts with the premise that larger schools are better, and I don't think that's always true," said Sears. He succeeded in persuading senators to restore small-school grants that the House wanted to phase out.

But that still wasn't enough to win him over; Sears voted against the bill. Campion said yea, but not happily. "This was not, in the end, an easy vote for me."

The two Democrats weren't alone in worrying that the House bill would be particularly tough on small schools. Unlike House members, every senator represents a geographical area that includes at least one small town. As a result, the Senate favored an education bill that takes a slower path to school-district consolidation than the House version.

The House voted to phase out special grants that go to small schools; the Senate restored them. The House directed communities to form school districts of at least 1,100 students; the Senate set the number at 900, plus allowed a longer time frame and fewer consequences for failing. The House capped school spending; the Senate rejected a cap.

Virtually all the differences have to do with the Senate's fear of harming small schools. "If you put on caps, if you hit budget limits, you hit those small schools because they're in trouble if the bathroom plumbing breaks," Senate Education Committee chair Ann Cummings (D-Washington) told colleagues.

"I think that it's more and more broadly recognized that we need to bring our schools into the 21st century," Sharpe said. "It requires some tough decisions, but they need to be done."

Gov. Peter Shumlin and his education secretary, Rebecca Holcombe, lean toward supporting the Senate version because, instead of forcing all districts to come up with a consolidation plan, it focuses first on offering accelerated financial incentives to a few that already share a union high school. Twelve unions in the state would be eligible. "I think it makes more sense," Holcombe said, noting that those consolidations could be used as models for others.

The Senate version may be easier for Readsboro and other small towns to swallow, but some wonder whether the Senate stripped the bill of meaningful reform. Critics wonder: Where's the leverage to push communities to work together? Where is the immediate property tax relief that voters demanded in the last election?

"That concerns me," said Sharpe, the studious House Education chair who is staking his legislative session on this bill. "I heard pretty clearly, and think a lot of House members did, that property taxpayers are hurting."

This week, as the bill heads to a conference committee, Sharpe and his Senate counterparts have the tough task of sorting through the two versions to come up with one that can please fans of both small and large schools.

Monday, House Republicans urged the conference committee to control costs. "It will be very difficult for many of us to support any bill that does not deliver serious, significant cost containment," said Rep. Kurt Wright (R-Burlington), a member of the House Education Committee. "If we don't deliver that, I believe we have failed the taxpayers of Vermont."

Much is at stake. Legislative leaders and Shumlin identified education finance reform as a cornerstone issue for the year.

"Our constituents would be disappointed if we didn't pass this bill," said House Speaker Shap Smith (D-Morristown), who reorganized the House Education Committee this year with the bill in mind.

But those watching from small schools tucked away in places like Readsboro are constituents with strong feelings, too.

When Chris Smith interviewed for the principal's job at Readsboro Central School last year, he found teachers still working at 6 p.m., students staying after school to do their homework and a community that loves its school. Smith was sold. He moved from Arizona, took his 12-year-old son out of private school and enrolled him at Readsboro. He hasn't regretted the decision.

"Everybody's just on board as a team," Smith said. "When we put on the holiday concert, the place is packed. We've got every kid in the school, practically, playing an instrument."

"We feel the school is doing a good job," said Edgerton, who joined the Readsboro school board this year and is an education professor at the Massachusetts College of Liberal Arts in nearby North Adams, Mass. She noted that the school is Readsboro's largest employer, one of the only places in town with reliable, high-speed internet and home of the town's public library.

Readsboro defies arguments that small schools cost more, even after figuring in small-school financial supports. The town spends $10,291 annually on each student — one of the lowest per-pupil spending totals in the state.

But with just 58 students, Readsboro also serves as a poster child for too-small schools. The town has just two kids in the fourth grade. The second grade has four students.

Sen. Jeanette White (D-Windham) last week noted Readsboro's two-student class as an example of the problem lawmakers are trying to solve. "There's a difference between a small school and a mini school," White said during the Senate debate, inventing her own term for a school that is too small to stay open. "I think that mini schools are harmful. Small schools are different from mini schools, and I don't know where we draw the line."

Edgerton conceded that having just two kids in a class is not ideal, but she said, "The alternative seems worse." Smith said his school deals with the small classes by pairing two grades together. The two fourth-graders join five third-graders in a classroom.

Readsboro also makes extensive use of online learning, he said. From third grade on, each student has a computer. The school uses Rosetta Stone software to teach Spanish. Smith is taking courses himself to learn more about technology so the school can expand its options.

Legislators could make all that harder for Readsboro, Smith said. The House bill would phase out the school's $90,000 small-school grant and the 18 "phantom students" for whom Readsboro gets state money — to ease the financial pain of declining enrollment. It would also force the town to work with neighboring burgs, some of them separated by mountains, to form an 1,100-student district.

"That would include every school within a four-hour drive," the principal said. "The House bill is a nightmare."

The Senate version would allow Readsboro to keep its small-school grant and have more time to form a 900-student district. It's more palatable, Smith said, though still worrisome.

Readsboro has few options to partner with neighboring communities. With high school choice, most students travel to North Adams, Mass., but that's not viable for younger children, Smith noted.

As the crow flies, neighboring Stamford, which has a 76-student elementary school, looks like a good choice. But as the school bus drives, the hourlong ride would be tough on kindergartners, Smith said. Parents wouldn't be able to walk to school to meet their kids. Students, many of whom lack internet access at home, wouldn't be able to stay after school to do their work.

Smith keeps coming back to the notion that all that disruption is unnecessary. "I don't feel like we're on a sinking ship," he said.

Holcombe and legislators in both the House and Senate who are steering the education bill disagree. With declining enrollment, many Vermont schools are in a serious bind no matter what the state does, they say.

"If we do nothing, small schools are going to close," said Holcombe, citing recent decisions to shut schools in Concord and Bridgewater. "This bill is not about closing small schools, but it is about trying to help out systems to try to achieve scale that might in some places maximize the opportunity students have," Holcombe said.

The important thing, Holcombe said, is that Readsboro has started talking about the issue and paying attention to its options.

"I appreciate that they're having the conversation now before they're up against the wire," Holcombe said. "If you're in crisis, no one wants to partner with you."