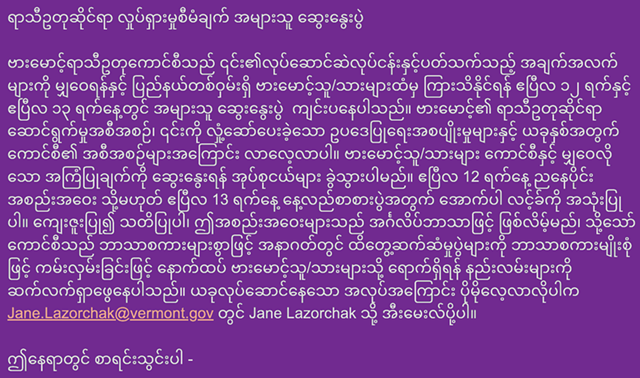 The Vermont Climate Council email stood out not for what it said but for in how many languages it said them.

The state doesn't typically communicate with the public, 94 percent of whom speak English at home, using elegant Arabic calligraphy and loopy Burmese script. But the climate council, whose past outreach efforts have been criticized, is trying to cast a wider net as it seeks an array of opinions on a plan that could affect the state for decades.

"My hope is that it feels more welcoming, more inviting ... and to take seriously that we want to hear from you," said Julie Moore, secretary of the state Agency of Natural Resources.

The translation is part of the agency's larger effort to communicate with those less proficient in English. Game wardens, for example, now carry cards to speed interpretation services for those who need a friendly reminder about fishing rules, Moore noted.

The climate council, however, is a very different beast. The 23-member body has a sweeping, highly technical charge to draw the road map that will help Vermont meet its aggressive emission reduction requirements.

So how many non-English speakers signed up for the sessions?

Hakuna. (That's "none" in Swahili.) The virtual feedback sessions were held in English, and no one took the state up on its offer to host future events in other languages, said Jane Lazorchak, the council's lead staffer.

That's no surprise, said Jenny Reith Taylor, the interpreting services coordinator at AALV, the nonprofit that translated the message.

"Email is not very popular in their communities," she said. Distributing flyers where people congregate or making videos people can share on social media are more effective approaches, she's found.

The state says it's taking notes.