At issue? Whether to make a last-minute edit to the tax code that would cut income taxes for 72 percent of Vermonters and raise them for 5 percent.

Hatched by Rep. Janet Ancel (D-Calais) and Sen. Tim Ashe (D/P-Chittenden), who chair the legislature’s tax-writing committees, the proposal would have capped income-tax deductions at two and a half times the standard deduction and set a minimum tax rate of 3 percent. All the money raised would be plowed back into lowering tax rates a smidgeon for everybody.

Though Ancel and Ashe said their proposal was revenue-neutral, the gov characterized it at a May 10 press conference as an “on-the-fly” scheme to raise taxes. Having spent the four-month session railing against raising broad-based taxes (despite having proposed $34 million in new spending himself), Shumlin was ready to pass a clean tax bill and show legislators the door.

Caught in the middle were Smith and Campbell. Their liberal caucuses generally liked the plan, but the two men recognized how tough it would be to override a gubernatorial veto — if it came to that. At first, both signaled tentative support for the proposal and delayed adjournment by several days to work out the details.

But after Shumlin applied his trademark vise grip, Smith and Campbell caved. At a hastily called press conference in the Statehouse cafeteria, they said they’d reached an agreement to put off the fight until the 2014 session, at which point they’d rally support for the tax plan.

“We expect that the proposal will be under consideration for next January, and we will move forward with that next January,” Smith said on May 13. “We look forward to conversations with the administration about how we can do that over the next couple of months.”

Added Campbell, “The governor has assured us he will be working with us over the next six months to accomplish the goals set out by the speaker.”

When they concluded their remarks, Shumlin’s secretary of administration, Jeb Spaulding, told reporters that he and the gov “are more than happy to have a considered discussion over the summer.”

“I wouldn’t be surprised if the legislature and the Shumlin administration do reach common ground for some tax reform next year that lowers tax rates for all Vermonters,” he said.

So how did those six months of discussion go?

“It appears that not much has been done,” Smith now says. “We have not made a decision about what we’re going to do.”

Says Campbell, “When you talk about priorities, the worst thing to do is talk about your priorities a year in advance, because so many things happen in the meantime.”

“If I knew then what I know now about those problems, I would certainly have said that reforming the tax system definitely takes a backseat to those,” he says.

Ancel and Ashe, the plan’s champions, say they’ve done little more over the past seven months than meet with leaders of several nonprofit groups who had expressed concern about how it would affect charitable giving. They have held no committee meetings on the matter.

“The speaker and I talk every so often and we certainly discussed the income-tax proposal, but at the moment there isn’t a clear path or a decision about if or when we’ll take up the proposal again,” Ancel says.

That, to her, is not terribly surprising.

“Time goes by and things change and people’s perspectives change,” she says. “I knew that and I think we all knew that at the end of the session.”

One thing that’s changed: Legislators no longer have the leverage they did when the session was winding down and they could hold the governor’s other priorities hostage.

For Smith, the problem with resurrecting the plan comes down to this: As they head into the next session, legislators are staring down yet another $70 million budget gap. If they reengage in the fight over Ancel’s and Ashe’s revenue-neutral proposal, it might not stay that way for long.

“Trying to make changes in a revenue-neutral way with an income tax might be difficult in that context,” he says. “People are going to want to raise revenue. So they’re going to look at the income taxes to do that.”

“That,” says Ashe, “is a very valid concern. Because what we were proposing at the end of the session was lowering all the tax rates and making it fairer. If he believes we can’t get through a discussion about tax reform because it would turn into tax generation, that’s a call he has to make.”

And then there’s Shumlin, who — no great shocker — appears disinclined to reconsider a proposal he panned last year. No matter that Spaulding said at the time that he “wouldn’t be surprised” if the gov and the legislature reached “common ground for some tax reform next year.”

What does Spaulding say these days?

“Our position is still the same as has been reported: that we would prefer not to do tax reform every year,” he says. “We have been clear we would strongly prefer that they not do that this session.” 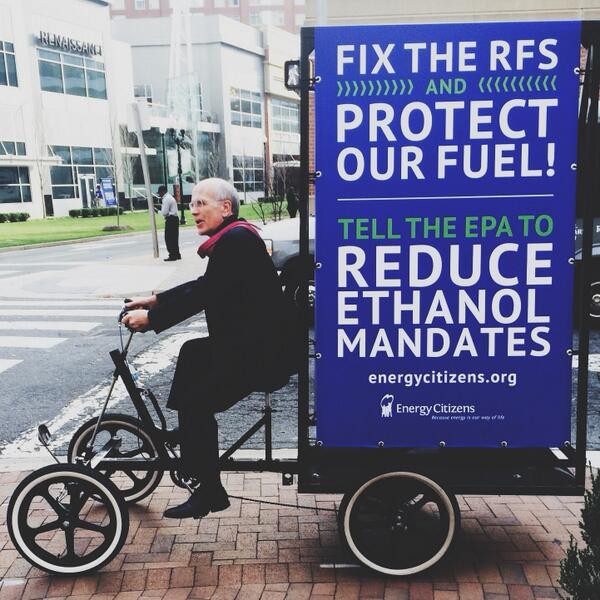 Congressman Peter Welch nearly rode into one of D.C.’s biggest lobbying battles — on a bicycle.

When he arrived by car outside the Environmental Protection Agency’s Arlington, Va., offices last Thursday to testify against corn-based ethanol mandates, Welch spotted a four-wheeled, pedal-powered, billboard-toting contraption. Its message — opposing the federal government’s Renewable Fuel Standard, which requires petroleum refiners to blend billions of gallons of renewables into gasoline each year — matched his own.

“Fix the RFS and protect our fuel!” the bicycle’s billboard read. “Tell the EPA to reduce ethanol mandates.”

Welch hopped on the bike, posed for a photo and posted it to Twitter, writing, “What do you think of my new ride? #RFS”

The bicycle, it turns out, was sponsored by Energy Citizens, a front group for the American Petroleum Institute. That’s one of the more than 200 organizations that spent as much as $79 million last quarter lobbying on either side of the ethanol issue, Bloomberg reported last week.

Joining API and the petroleum industry in opposing ethanol mandates were the restaurant and meat-growing industries, which compete for corn crops, and the small engine and boat industries, which blame ethanol for damaging engines. They — and Welch, who has become a leading anti-corn-ethanol voice in Congress — scored a big victory last month when the EPA released a draft rule reducing next year’s Renewable Fuel Standard by three billion gallons.

“It’s a perfect example of Rep. Welch sort of carrying their message literally and figuratively,” Dinneen says. “The oil industry clearly is pushing and coordinating the effort to repeal the RFS.”

Welch concedes that the complexities of the issue have created “strange bedfellows,” with oil companies fighting alongside anti-hunger organizations and some environmental groups. But he says he’s never worked with Energy Citizens or the API, clarifying that his joy ride was “a spontaneous thing.”

“I had no idea who sponsored the bikes, but I agreed with the message, so I just hopped on,” he says. “It was a cool bike and a good message.”

Welch maintains that his opposition to ethanol is “totally Vermont homegrown.” He says he first learned about the issue several years ago at Franklin County Field Days in Highgate, where a man told him that ethanol-blended gasoline had wrecked his chainsaw. Further investigation, he said, revealed that the mandate was driving up feed prices for Vermont dairy farmers.

Since then, Welch has distinguished himself as one of the loudest anti-corn-ethanol voices in the House — holding press conferences, introducing legislation to scale back the mandates and testifying at last week’s EPA hearing.

Welch says his work on ethanol issues predates that flurry of contributions — and he’s right. Welch held his first ethanol-related press conference at a Malletts Bay marina in April 2011.

But it’s worth noting: From a politician’s perspective, the best big-money lobbying fights in D.C. are those in which you can pick a side amenable to your constituents, make a lot of noise and watch the industry contributions roll in.

Welch doesn’t see it that way.

“My advocacy has been based on the fact that Vermont farmers were the ones who got me interested and my investigation showed that this was, I think, a really important issue for lots of reasons. As far as who contributed to me, you’ve got the record there,” he says. “Why they contributed, you’d have to ask them. But there haven’t been any coordinating activities or anything like that.”

Welch also has a personal interest in the issue.

As he mentioned during last week’s EPA hearing, the congressman’s chainsaw stopped working unexpectedly several years ago. When he brought it into the shop, he says, he was told ethanol-blended gasoline was to blame.

“My own chainsaw got wrecked,” Welch says.

Two of Vermont’s top political reporters have landed new gigs — one in, and one out of, the journalism world.

Carlson got her start at Channel 3 as a college intern and “clawed” her way up the ranks, she says — as a producer, reporter, Statehouse bureau chief and finally co-anchor of “The :30,” the station’s 5:30 p.m. interview show.

“I’ve only ever worked for Channel 3,” she says. “It’s always been my passion. I love reporting — love it. Nothing can ever replace this.”

Hirschfeld first joined the Barre-Montpelier Times Argus in 2003 as sports reporter and copy editor. Since 2009, he’s covered state government at the Press Bureau, which is jointly operated by the Herald and TA. Hirschfeld replaces John Dillon, who became VPR’s news director in September.