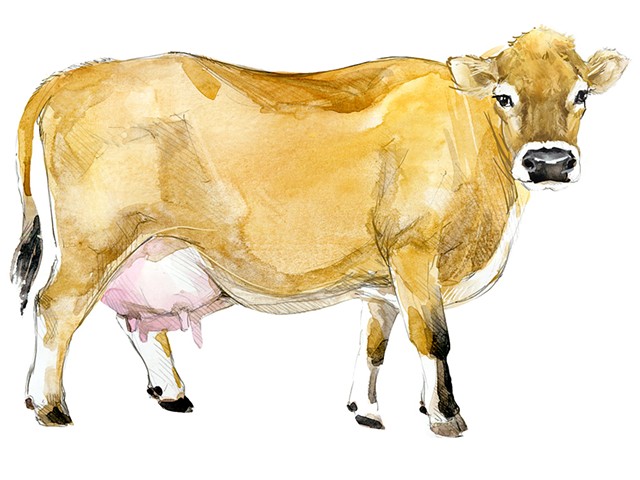 In February 2016, Henry Cammack began selling bottles of raw Jersey milk at Bread & Butter Farm in Shelburne under the name Henry's Dairy. This week, he closed the dairy and started selling his cows.

Since Bread & Butter's inception, providing milk from cows living on the land has been part of its model. And, given that the farm draws crowds with its weekly burger nights and its well-stocked farmstand, the closure may come as a surprise.

"It basically comes down to finances," Cammack said. He had unexpected costs and, like many food businesses, the dairy was already operating on a shoestring.

Another side effect of being undercapitalized was going it alone. "I was working between 60 and 80 hours every week, milking 13 times a week, and didn't have the money to hire employees," Cammack said. "I got really worn down."

Cammack has sold some of his herd to Family Cow Farmstand in Hinesburg, and is in talks with other dairy farmers. Knowing where some of his cows are going, he said, has improved his mood. "I cycle between feeling like absolute garbage and thinking, Thank God this is being lifted off my shoulders," he said.

Overall, Cammack said, he still believes there's a demand for raw milk — but his sales didn't ramp up fast enough. He's grateful for the learning experience Henry's Dairy provided. "I was 24 when I started this farm," he noted. "If I'm really honest with myself, I think I bit off a little bit more than I could chew."

"We're really sad to see Henry's Dairy go," said Bread & Butter's Corie Pierce. "We weren't in a position to take it over at this time, as we'd hoped to do if Henry moved on. We're very hopeful that we'll have a dairy here again in the future."

The original print version of this article was headlined "Ciao, Brown Cow"