A Rash of Goat Thefts Has Vermont Farmers Scratching Their Heads 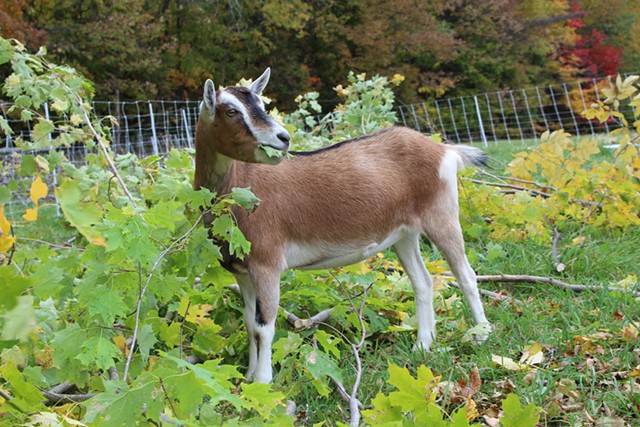 Vermont authorities and farmers alike are scratching their heads over a recent rash of goat thefts. Amber Connolly found eight of her goats were missing last week from her farm in Randolph, while Sarah Nolin reported to police the June 4 theft of five goats and a male sheep from her 220-acre property in Corinth.

Nolin and her husband, Joseph, with their two children, ages 8 and 10, raise a herd of about 70 sheep on their Hurricane Ridge Farm, for meat and wool. The family's herd of Alpine goats were more like pets that also grazed their land.

"They were the sweetest little goats you can imagine," Nolin told Seven Days. "I'd never sell them for meat or anything because they were so sweet."

Nolin at first thought that the goats and the ram, used for breeding, had escaped their enclosure next to the family home. They'd disappeared in broad daylight, after all.

The first sign they'd been goatnapped? An apple tree outside the animals' pasture was untouched.

She started asking around town, posting on community listservs and Craigslist. Then she got worried and filled out a report with the Orange County Sheriff's Department. Nolin even called livestock auctioneers in Massachusetts and New York. The goats aren't marked or branded. Without markings, she said, it'll be difficult to track them down. Police haven't had much luck either, she said.

The Vermont Sheep and Goat Association posted about the thefts on its Facebook page and mentioned a third, possibly related theft reported in southern Vermont. Nolin hopes that getting the word out might dissuade prospective goat rustlers or make it harder for them to sell the stolen animals.

"I'd really like to get some resolution," Nolin said. "For us, it's been six weeks, so we probably won't get our goats back, but I just really want to help the others."