Jeremy Harple and Victor Veve go Hollywood with a new band, the Aerolites 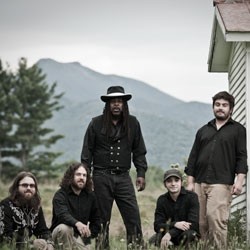 The Aerolites’ Jeremy Harple and Victor Veve hardly seem like glitzy Hollywood types. Veve, 31, seated at a table by the front window at Muddy Waters on a recent Thursday afternoon, sports a wild beard and a long, unkempt mane of hair beneath his crisp, blue trucker hat. Across the table, Harple, 33, is unassuming, clean shaven, and clad in muted browns and yellows and a cocked fedora. But as Vermont audiences will discover when the Burlington band plays at the Higher Ground Showcase Lounge this Saturday, looks can be deceiving. And so can sounds.

Earlier this year, the duo went to Hollywood to record the Aerolites’ debut album. The self-titled record, due out in early 2012, features some high-wattage star power, including the Allman Brothers’ bassist Oteil Burbridge and Kenny Aronoff, a renowned studio drummer who currently plays with the Tedeschi Trucks Band. Producer Oliver Leiber — son of the late, famed songwriter and Rock and Roll Hall of Fame inductee Jerry Leiber (“Stand By Me,” “Hound Dog,” etc.) — engineered and coproduced the album. Vermont expat filmmaker and musician Martin Guigui also coproduced.

That’s certainly a cast worthy of La La Land. But as Guigui is quick to point out, Harple and Veve are the true stars of the show.

“Their songwriting is unique,” writes Guigui in a recent email. “It’s a mesh of many old-school influences. But the lyrics are addicting, offbeat, poetic phrases with quirky melodies that create a rather indefinable style.”

Harple and Veve have been crafting that style, which Harple has been known to nebulously define as “rebel folk,” for the better part of 20 years. The two have played together in various configurations since they were teenagers, and claim to have 400 original songs between them.

Veve estimates the Aerolites is “at least” the duo’s third band together. The most notable of those was Speakeasy, a popular local band active in the late 1990s and early 2000s. Both songwriters say they’ve taken profound lessons from their experiences in that group — lessons that manifested in the creation of the Aerolites’ debut. Though, curiously, Speakeasy never cut a record.

“It was a slammin’ band,” says Veve of Speakeasy. “But we made a mistake never making an album.” He adds that the group’s grueling gig schedule, some 200 shows per year throughout the Northeast, was a double-edged sword. “Playing too many shows … it can kill your momentum.”

Since Speakeasy, Harple has since gone on to a modestly successful solo career; Veve joined local reggae act Lambsbread. But it was only a matter of time before the two would feel the itch to collaborate again. While the duo were on a recent road trip to a Harple gig in Rochester, N.Y., idle banter in the car turned to a serious discussion of a shared vision of what their music could and should be.

“We realized we had to do another project,” says Harple. They began brainstorming the various connections they had throughout the music industry, which led them to Guigui, Leiber, Aronoff and Burbridge.

Last February, Harple and Veve spent 14 days in LA, 13 of them in the studio.

“We were sleeping, eating and breathing music,” says Harple. “It was exciting. I’d never had the opportunity to just dedicate two weeks of my time solely to music.”

Those sessions were marked by a number of strange coincidences. It turns out Leiber had originally planned to name his studio Speakeasy — he went with Chez Olivier instead. An effects pedal in the studio was called “Clyde,” which is the name of an Aerolites song. There was also some numerological weirdness. All of the band members’ hotel-room numbers added up to seven — 313, 331, etc. — and so did the street address of Lieber’s studio. (For what it’s worth, the print date for this story is Wednesday, December 7 … in Seven Days. Cue the “Twilight Zone” theme song.)

Another more tangible coincidence is that Guigui’s film-editing suite was one block from Leiber’s recording studio in LA During the Aerolites’ sessions, Guigui was editing a new horror film, Beneath the Darkness, starring Dennis Quaid. During a break, Guigui invited Harple and Veve to watch a rough cut of the flick, whose central character smokes electric cigarettes. The next day, Veve and Harple had a new song, “Electric Cigarette.” That tune will appear on the soundtrack, alongside songs by Alison Krauss, Warren Haynes and Bret Michaels, among others.

Harple says working with experienced producers in Leiber’s studio helped him become comfortable relinquishing control of his songs and accepting outside input. That’s often tough for a songwriter to do, especially one who has worked solo for so long. But he says it has helped when bringing songs to the Aerolites’ touring band, which includes Death and Lambsbread drummer Dannis Hackney, guitarist Micah Sanguedolce and bassist Ian Wade. Though Harple and Veve split songwriting duties, arranging is a group effort.

“It’s nerve-wracking to give up control,” Harple admits. “But you learn that any choice you make ultimately has to serve the song.”

He cites “Every Third Day” as an example. Originally written in Harple’s familiar rebel-folk mold, the version that appears on the record is a bouncy, piano-driven pop song. Reimagined by Leiber, it’s a radio-friendly hit in waiting. Despite its glossy sheen, the song somehow retains Harple’s signature gritty style, which creates a gripping contrast.

“The collective focus and goal was to make an album that was true to the songs’ inner voices,” says Guigui.

“We really aimed to showcase the Aerolites’ diverse, eclectic style,” he continues. “We made this one just right, the way they used to back in the day.”