Rapper Jarv is on the Verge of a Breakout 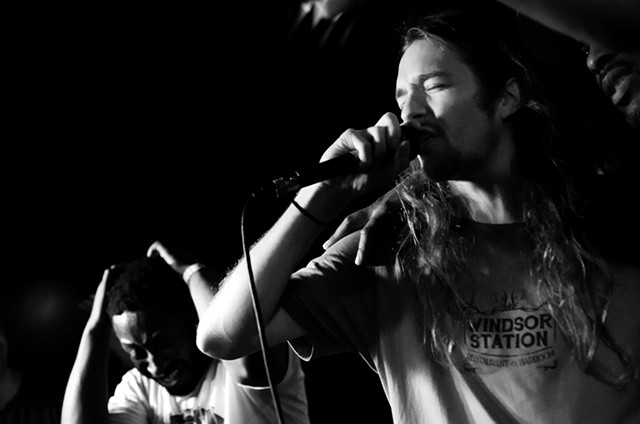 Windsor rapper Jarv — given name Nathan Jarvis — sports the long hair, demeanor and dress code of a skateboarder. In conversation, he is earnest and polite, a classic Yankee gentleman. The 24-year-old is also, without question, the most prominent MC in the state of Vermont.

While that statement might rile his competitors, the numbers are inarguable. Whether the metric is album sales, Facebook fans or YouTube views, nobody else in the 802 is even close. Most of the videos Jarv has dropped over the past few years have hit six-figure view counts; 40,000 fans follow him on Facebook.

Jarvis has built a devoted in-state following thanks to incendiary live shows. And on Friday, June 8, he'll export his talents alongside genuine hip-hop royalty: He and fellow Vermont rapper Mister Burns open for KRS-ONE at the Hawks & Reed Performing Arts Center in Greenfield, Mass. (Locals can catch him the following night, Saturday, June 9, at the reks in Warren with Burlington funk band Brickdrop.) In short, Jarv currently stands on the verge of becoming Vermont's first breakout rap star.

"It's crazy to think about," Jarvis muses. "I made, like, comedy songs in high school. I wasn't serious about anything until Maiden Voyage."

He's referring to his rap group. Jarvis got his start with the energetic trio Maiden Voyage and still performs with them frequently. The group grew out of childhood friendships with John Carter — who used to perform as JCOE but recently rebranded as Teece Luvv — and Ethan Sumner, who raps as Nahte Renmus.

From their quiet beginning in 2011, Maiden Voyage have been unusually focused. They are students of the craft who spent countless hours woodshedding and experimenting in Jarv's makeshift home studio. They also spent a lot of time watching videos of hip-hop legends performing live. For a genre increasingly built on the braggadocio of youth and the immediacy of the internet, such a studious approach is not common. Perhaps it should be.

"Jarv definitely played a role in getting me to take music more seriously," recalls Carter. Sumner agrees: "He always stressed how important a good live show was. We'd practice endlessly, even long before our first show."

Maiden Voyage's breakout moment is easy to pinpoint: the 2013 edition of A Fest for Wes in Windsor, a private festival with a big reach. Maiden Voyage were added to the bill due to local demand. Scott Lavalla, aka Mister Burns of the Lynguistic Civilians, was running the show that year, as well as headlining.

"I was a little skeptical about putting them on, to be honest," Lavalla admits. "I didn't know what to expect, but I was blown away after the first track."

Lavalla was hardly alone, and Maiden Voyage were a huge hit.

"We went in wondering if we'd get booed offstage," Sumner recalls, "and came out realizing, Wow, we can really do this."

"After that," recalls Jarv, "all of a sudden, we just kept getting booked every weekend."

The festival appearance jumpstarted Maiden Voyage's local career and formed the foundation for a long friendship with the Lynguistic Civilians, at the time Vermont's most prominent hip-hop act. Yet when asked if his crew were mentors for the Windsor youngsters, Lavalla demurs. "We definitely opened some doors for them," he says. "But they're all so driven they would have gotten there anyway."

Jarv's talent is immediately apparent. So much so that other local rappers tend to remember exactly where and when they first saw him spit onstage. For example, take Dustin Byerly, aka Sed One, of Montpelier party rap crew Boomslang.

"Oh, man, January 23, 2015!" Byerly exclaims. "We were playing Positive Pie and, I try to leave my ego out of it, but I still wondered why they were on after us. Once they got started, all I could think was, Thank God we didn't have to go on after them," he continues. "Jarv just has these otherworldly, multi-syllable turbo raps! I became a super fan in that moment."

Jarv's technique is complex. The tongue-twister acrobatics of Fu-Schnickens are obvious. But underneath his flashy flow is a hip-hop storyteller, equal parts Slick Rick and Slug of Atmosphere. The result is distinctive, and Jarv is carving out his own lane at this point.

Thanks to modern technology, he's been converting fans online, too. So many, in fact, that most of his Facebook fan base is now outside of Vermont. Jarv's first big break came in 2014, when the rapper submitted an entry to the Definition of a Rap Flow Contest run by New York rap maniac and underground legend RA the Rugged Man.

Viral video contests are generally brand promotions, not talent shows, so the best performances seldom win. Yet what RA the Rugged Man did was quite different. He was genuinely looking for new talent and convened a top-notch panel of judges, including Talib Kweli and Jean Grae, to help decide the winner.

That winner was not Jarv. He didn't even make the top five. What he did, though, was deliver such a blistering verse that it kept getting shared, again and again ... for years. It's been pirated and repackaged hundreds of times by now, and the original upload currently stands at half a million views on YouTube.

This inevitably attracted the attention of RA the Rugged Man, who summoned Jarv to his home studio in 2015 to either spit an amazing verse on camera or get beheaded by a sword. Jarv succeeded and, as a reward, got to join RA for a nationwide tour — and keep his head.

"That was the first time I'd ever been to New York City," says Jarv. "After that, it was my first time in a whole lot of other cities, too."

Once again, given an opportunity, Jarv made the most of it, delivering show-stopping performances every night. He's been invited back for two more tours with RA since then. That's given him a lot of connections, not to mention momentum. But he's still the same careful strategist who drilled Maiden Voyage back in the day.

"Jarv is smart," says Lavalla. "He is constantly writing and making beats, and he's very meticulous about what he puts out."

According to Jarv, it couldn't be any other way. "I'll never understand why artists are always so eager to put shit out," he says. "Wait until you have a couple of songs that mesh with it and you could put out a complete project, and actually gain something from it."

The man surely practices what he preaches. In addition to his constant schedule of shows, he's been working on the next volume of his mixtape series Jarvage, due out in June, and prepping for a long promotional blitz this summer.

Really, it's already underway. Jarv was recently featured in the Grind Mode Cypher video series, which is a huge deal in the world of underground rap. He's also got a feature track on Eastern Standard, a hip-hop compilation from Boston super-promoter Leedz Edutainment that aims to be a guided tour of the East Coast scene.

Jarv is about to become a big deal and, according to his colleagues, he truly deserves it. "It's been incredible to watch," says Lavalla of the rapper's ascent. "Dude is a great guy and humble with his immense talent."

Jarv performs with Brickdrop on Saturday, June 9, 9 p.m., at the reks in Warren. $10/15. jarvmakesmusic.bandcamp.com