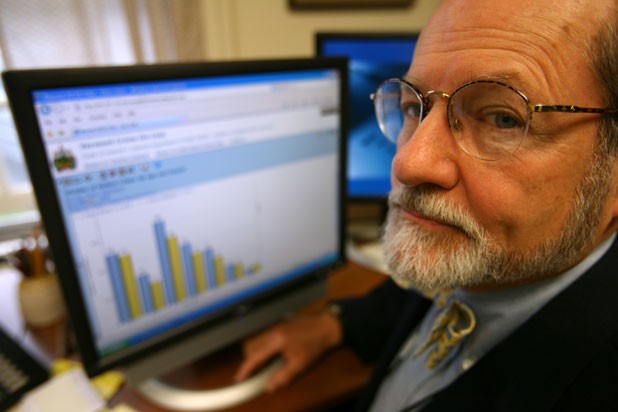 Ever get a speeding ticket for driving 50 mph in a school zone? Been popped for pot possession? Arrested for civil disobedience? If you've done any of these things, or worse, Max Schlueter has your number. And your fingerprints. As director of the Vermont Criminal Information Center for the last 15 years, Schlueter's got the lowdown on the state's rap sheets.

The definitive clearinghouse for Vermont crime data and statistics - sex offenders, aliases, protective orders, outstanding warrants and the like - VCIC lives on the first floor of a three-story brick building in Waterbury. It's the same one that houses the state police, crime lab and evidence locker. However, all of VCIC's employees, including Schlueter, are civilians. That's important, he notes, lest anyone think they work solely for the police.

Schlueter's prime directive is accuracy, because errors can cost lives. When a Vermont vehicle gets stopped anywhere in the country and a police officer runs the plates, that officer's safety depends on information provided by VCIC.

The same is true for a toddler in a daycare center or a senior citizen in a nursing home. VCIC also handles the criminal-background checks on employees who work with vulnerable populations - i.e., children, seniors and the disabled. In 2007 alone, those checks numbered 400,000, or about 50 per hour. Due to VCIC's heavy caseload and small staff, many of them are performed in the middle of the night.

That's likely to change soon. Under a new law that takes effect on July 1, Vermont's crime records will become publicly accessible - and, later this year, searchable online for a small fee.

Seven Days sat down with Schlueter to discuss his work and the implications of the new law.

SEVEN DAYS: Does VCIC keep records on people who've been arrested but not convicted?

MAX SCHLUETER: We have information on arrests that end in dismissals and cases where . . . the state's attorney looks at the case and, for whatever reason, decides not to prosecute.

SD: But isn't a person innocent until proven guilty?

MS: We don't release that information to the public or to an employer. Under the law, the public or the employer only gets conviction information. So, if you had a string of arrests but none of them ended in conviction, if someone queries your record, it'll come back, "No record."

SD: What happens when a record is expunged? Is it deleted?

MS: Yes. Part of the problem with that is, we'd prefer to see records sealed versus expunged, because . . . you can never really expunge the record. We can remove a record from our files and literally it's gone - we shred the stuff; it's taken out of our system and double-checked. But Seven Days might have done a [story] on somebody from a police blotter, and you can't retract that information from the press once it's out there.

SD: How can that create problems?

MS: Let's say a recruiter does a background check on someone they're recruiting [into the military]. They may see something about an arrest. They then come to us and . . . want to know why there's an arrest that's been recorded by the Burlington Police Department but we don't have it. We're not even entitled to have a record that says we've expunged the record.

SD: What's the most interesting part of your job?

MS: The variety. Every day is a little different . . . I liken my job to one of those acts on "The Ed Sullivan Show" - the guy who could balance 17 plates and keep them all spinning.

SD: What happens if this building is damaged or destroyed?

MS: The data is backed up every night, so worst-case scenario . . . we'd lose a half-day's work. Those files are taken off-campus every night and stored at another location, which is secret.

SD: Do you plan to switch to newer technologies, like DNA or retinal scans, to ID people?

MS: Our business is to identify people, to make sure that when you say Ken Picard, it's the same Ken Picard that's in our records and not someone else who's used your name . . . Probably, fingerprints are going to remain the gold standard. You can say, "What about retinal scans, facial scans?" All of those things are possible, but the repository that we've been using since the turn of the century is fingerprints. So if you were going to make the conversion to a new technology, it would be extraordinarily expensive, and you'd have a limited database to work against.

MS: From a public-safety perspective, I think it's important to have this information available. The best way to ensure record quality is . . . [for] people [to] have a chance to look at them and say, "Hey, that's not right!" or "That's not me," or "This didn't happen that way." When the data is secret . . . there are all kinds of things going on that are affecting you that you don't even know about. The notion of protecting the public's privacy can be a double-edged sword.

MS: Back in the old days . . . only certain people were entitled to that information. So, theoretically, you could have someone who was entitled to do record checks . . . go in and do a record check on their daughter's new boyfriend who they don't like, or a landlord doing record checks [on potential renters].

SD: Could making those records public create similar problems if, say, a landlord doesn't want to rent to a convicted felon?

MS: Keep in mind that being a convicted felon is not a protected category. So, if you don't want to rent to a felon because he's a felon, no one's going to say that you're discriminating.

SD: Is that a good thing?

MS: That depends upon your perspective. On the one hand, the landlord says, "I don't want to rent to this guy who's got three convictions for the sale of cocaine because I don't want to put the rest of my tenants at risk if there's a shoot-out outside his door." On the other hand, is it counterproductive to say [to an ex-con], "You're not living here. You're going to live in some converted motel where they don't really care much about anything." What kind of environment is that for that person to live in? It's difficult. There's a lot of balancing of interests.

MS: Like everyone in state government, we're looking at belt-tightening and . . . our goal is to make sure we don't have a backlog. I call a backlog the silent killer . . . When judges and prosecutors look at our records, they presume they're up to date. So, if they're not up to date and you let a person with a rape charge out on [his own] recognizance, with another rape charge pending in another jurisdiction, that's not a good thing. That could literally kill somebody.

SD: That doesn't happen often, does it?