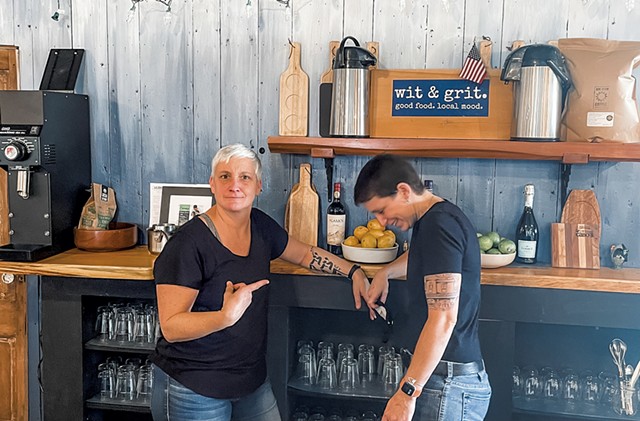 If the restaurant thing doesn't work out for wit & grit. co-owners Hannah Arias and Ericka Grygowski, they may have a future in improv comedy. Their humorous social media videos have attracted a local following. But the women's breakfast and brunch spot in downtown Randolph is hardly at risk. Barely 6 months old, it's simmering along like a pot of golden, pepper-flecked sausage gravy.

At wit & grit., that gravy is destined to blanket two buttermilk biscuits, each with a frilly doily of fried cheese griddled onto its bottom ($8). No less alluring is the Pile o' Taters: It's loaded with cheese, bacon, green peppers, house-pickled jalapeños and spicy house mayo and topped with a fried egg ($7.25).

The business partners are also good friends, as their easy on-screen repartee makes clear. Grygowski has family ties in Bethel, and Arias is originally from Bennington; each moved to Vermont with their spouses about four years ago. They have four daughters between them and met through their two youngest. 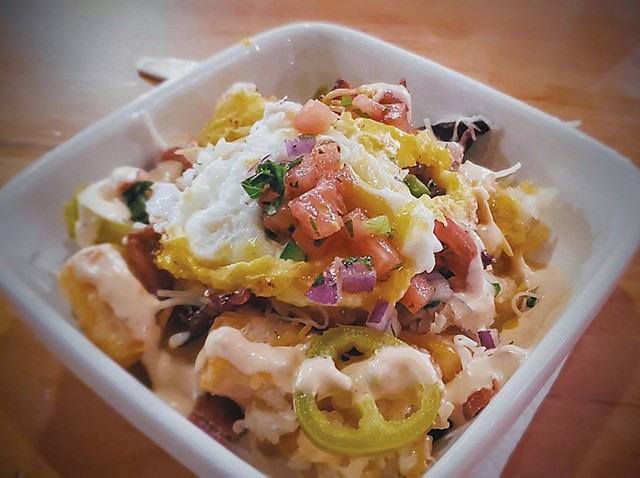 In the videos, the women might banter about life as restaurateurs and as parents, or try to remember the name of Norm's wife from "Cheers," or refer to Mother's Day as "laundry-doer day." Sometimes, they even talk about their food: a doughnut French toast special, say, or the pickled jalapeños made from Grygowski's mother's recipe.

Over the restaurant's first months, Arias and Grygowski have kept the menu focused. Along with the biscuits and loaded tater tots, they offer several omnivore and vegan burrito options ($6.75 to $8.75) and brunch sandwiches and wraps ($7.50 to $10). Their kids favor the smaller-size Burrito Bro and the mini waffles served with fruit compote and maple syrup produced by Grygowski's dad ($6.75).

The restaurant, just a 10-minute drive from I-89's Exit 4, is an easy refueling stop during wit & grit.'s Friday-through-Tuesday hours. On a recent visit, we inhaled the biscuits and gravy; the Breakwich with a fried egg, melty cheddar, fried potatoes, choice of bacon or sausage, and the spicy sauce option ($7.50); and the Burrito Got Back, stuffed to the gills with scrambled egg, cheddar, potatoes, freshly chopped salsa fresca and sausage ($8.25). 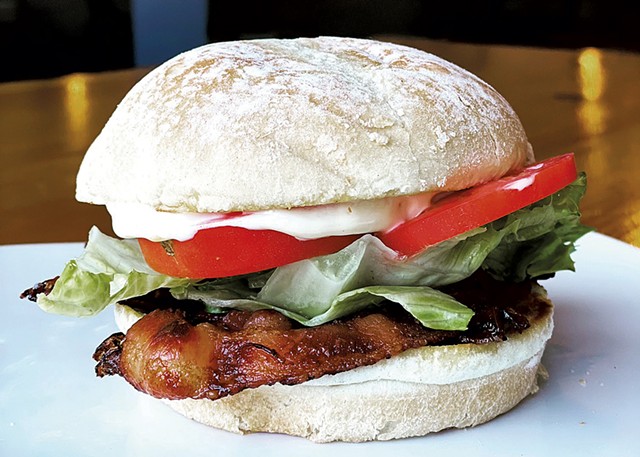 The latter was sealed with another golden splotch of fried cheese. "It's like masking tape for burritos," Grygowski explained.

The Proud Mary cocktail ($10) was just-right spicy and named in honor of Tina Turner's cover of the Creedence Clearwater Revival classic. "When is not the time for an ode to Tina Turner?" Arias pondered.

Next month, wit & grit. will expand its offerings to include a salad version of the club sandwich, a local beef burger, and a nut- and gluten-free, vegan fruit crumble topped with house granola.

There are still no grits planned for the menu, but Grygowski and Arias have demonstrated both wit and grit while navigating the launch of their new restaurant.