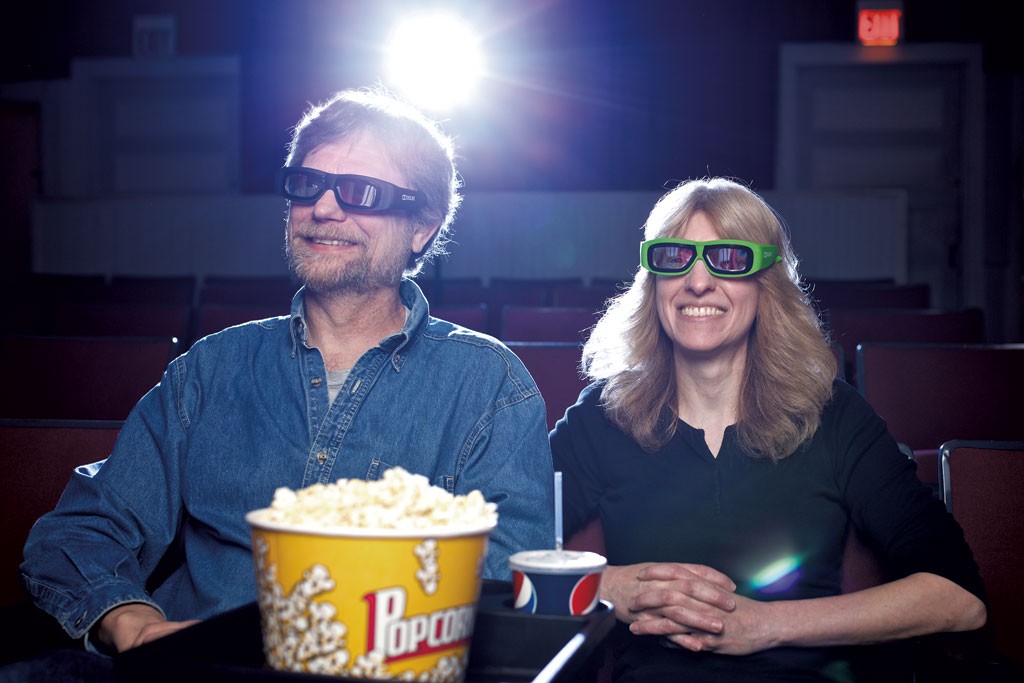 On a recent Monday evening in Randolph, the Playhouse Theatre's showing of the film Noah failed to attract much of a crowd, despite the thematically appropriate rain that slicked the streets. Projectionist Dave Tomaszewski had predicted low attendance for the day's sole screening, and he turned out to be right. Only seven seats were occupied, affording each patron a completely unobstructed view.

But the meager attendance that evening didn't reflect the way that many locals feel about the Playhouse, which has been showing movies since 1919, making it the oldest surviving cinema in Vermont. In fact, they have a stake in it. A few hundred Randolph residents are part owners of the Playhouse and have a direct interest in its success. Chalk up the low attendance to word of mouth about Noah's turgid obviousness (really? white doves bearing olive branches in their bills?), not to any lack of charm or determination on the part of the venue.

The Playhouse Theatre is one of a vanishingly small number of single-screen, purpose-built theaters still in operation, and its age makes it all the more exceptional. The triumphant march of the multiplex, which began in earnest in the 1960s, had stomped out many Main Street movie theaters by the 1970s and achieved dominance by the 1990s. It's a minor miracle that this 167-seat cinema has survived for almost a century in a town that is currently home to about 5,000 people.

Just as unusual is the fact that the Playhouse, unlike many small theaters, hasn't "niche-ified" itself into unprofitability. The Playhouse doesn't show "artsy" films but screens current mass-market movies from Hollywood on opening weekend; it's even equipped to project films in digital 3-D (without charging patrons a premium), something few movie theaters its size can claim. It is truly a cinema of the people, by the people and for the people.

In 2010, Tomaszewski and his wife, Tammy, who co-owned the business at the time, saw the writing on the wall, he recalls. The age of digital projection was nigh, and film exhibitors would have to bear the brunt of the conversion costs, just as they had in decades past when confronted with the advents of sound and widescreen-projection processes. Purchasing a high-quality digital projector requires a five-figure outlay.

A couple of years later, on the advice of two different law firms, the Tomaszewskis filed the paperwork to create Playhouse Flicks Foundation, with the intention of operating it as a 501(c)3 tax-exempt, nonprofit entity. Such status is granted only to businesses that are housed in a structure that meets the legal definition of "public building": one that provides facilities or shelter for public assembly.

It was then that Randolph resident Susan Delattre solicited, on behalf of the theater, the advice of Laddie Lushin, a local attorney who is an expert on cooperative law. Delattre, who now sits on the Playhouse's board of directors, says, "I know that [Lushin] is one of the finest cooperative lawyers in the country, and he happens to live in Braintree, Vt. ... At the point when we were trying to figure out how to keep the theater alive, I thought maybe a cooperative was an option. If it was, he should be the person we worked with."

Lushin told the Tomaszewskis that they'd been misinformed about how the state of Vermont defines "public building," which actually refers only to government-owned properties. He suggested instead that the Playhouse reinvent itself as a cooperative. Playhouse Flicks Foundation was dissolved shortly thereafter.

Playhouse Cooperative, the nonprofit corporation that currently operates the theater, was incorporated in August 2012. It is a "consumer cooperative," an entity that sells ownership shares — effectively, shares of stock. A one-time subscription costs $100, and the theater even offers "preferred" shares at a higher rate. In return, shareholders get discounted ticket prices.

It's an arrangement with some external similarities to the "community supported" business model that helped Claire's Restaurant & Bar in Hardwick and Phoenix Books Burlington to open. One difference: In a cooperative, all shareholders receive a portion of any profits.

A few months after forming the cooperative, the Tomaszewskis launched a Kickstarter campaign to raise the funds to buy a new Barco DP2K-10Sx projector and thus ensure the theater's continued operation.

"As a for-profit business," Dave writes in an email, "we felt uncomfortable asking people to just give us money." So he adjusted the Kickstarter goal downward. Though the new projector cost about $50,000, the fundraising goal was $20,000. (The campaign exceeded that goal, raising just shy of $30,000.) Still, the theater also had to purchase a new screen, sound system and computer equipment to support the shift to digital projection.

The fundraising campaign was augmented by the selling of shares in the new business, as well as other fundraising efforts, such as participating in Ford's "Drive 4 UR Community" program and selling on-screen ads to local businesses.

Other cooperatively owned movie theaters exist in the U.S., but they're uncommon, and few show mainstream movies as the Playhouse does. One, the Morris Theater Cooperative in Morris, Minn., does screen current Hollywood fare, but most such cinemas play to more specialized audiences. The Art Theater Co-op in Champaign, Ill., for instance, sells shares for $65 apiece; it shows more "challenging" films such as Nymphomaniac and offers midnight showings of cult favorites such as Clue.

The ownership of the Playhouse is currently spread among 162 subscription-based agreements, most of which represent a couple or a family. In Dave's estimation, the Playhouse has more than 300 individual owners.

One of those owners is Bill Lynch, 70, who notes two main factors that influenced his decision to become a part-owner of the Playhouse. For one thing, Lynch, a Randolph resident, is disabled, and it's far easier for him, he says, to patronize a local theater that has an area where he can watch films in comfort toward the back of the house.

The other factor is the Playhouse's contribution to a sense of community in his hometown. Without the theater, Lynch says, "there would be nothing for the teenage kids to do anymore ... The theater gives them something to do; they can have their date night without using the car." He adds, "Tammy and Dave are very nice people. [The Playhouse] is just a nice place to go ... It's more of a family theater. You know everybody that's there, and there's conversation before the movie."

For all its many owners, the Playhouse has only one employee: Tammy Tomaszewski. (Technically, Dave works there as a volunteer.) The booth in the lobby is arranged so that she sells tickets through one window and refreshments at another. If you request a receipt, it'll be handwritten on a page torn from an old pink diary that the Tomaszewskis' daughter discarded in her youth.

"I'm trying to get this set up so that it will be perpetual," says Dave, himself the owner of a share of the Playhouse and the owner outright of the building housing the cinema. The cooperative pays monthly utility expenses and rents the building from him for $25 a month; the eventual plan is for the co-op to own the building and to pay off the mortgage by collecting rent on an apartment at the same address.

Provisions in the co-op's charter ensure that the business model will remain viable. The Playhouse's many owners are not on the hook for any future financial difficulties; that responsibility rests with the six-person board of directors. The theater also offers shares at different price points. As its website states, "It would not be neighborly to exclude anyone, especially for income level."

With the movie-theater business at a particularly perilous moment in its history, why would anyone want to own one-200th of a small-town cinema?

Besides discounted ticket costs, the owners of the Playhouse stand to gain in several ways, says Dave. First, they will make a little money if and when the theater itself turns a profit; second, owners have a say in both the operation of the business and the selection of films.

But the most important benefit of the cinema's cooperative ownership, Dave argues, is one that redounds to locals — including those who are not co-owners and know nothing about the theater's unusual business model. It's simply that the Playhouse Theater remains in business in Randolph. "For the people who didn't buy into it, it's just a regular movie theater. It's no different to them," he says.

Board member Delattre concurs. "It's a beautiful theater, and very intimate. The theater itself is a prize ... And people would have to drive 30 or 40 miles to get to a movie theater if it weren't for the little theater in Randolph. It's such a great addition to the culture of the village."

The original print version of this article was headlined "One Town, One Screen"