Ranch Camp Serves Up Bikes, Beers and Burritos in Stowe 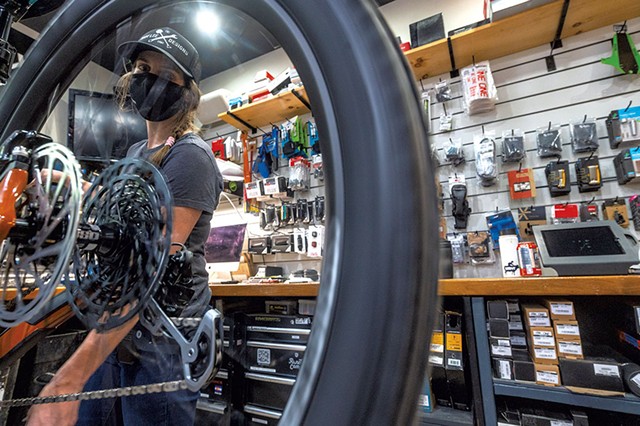 The driveway that leads to Ranch Camp in Stowe is steep, gravelly and curved. In other words, just right for a mountain bike.

Mountain bikers are, in fact, the target audience for this hybrid business on the Mountain Road. In the brown building at the top of the driveway are three ventures rolled into one: bicycle store, repair shop and restaurant.

The store offers sales and rentals of mountain bikes, along with accompanying gear and goods such as jerseys, helmets, power bars and tire sealant. At the shop, bike mechanics do annual tune-ups and repairs, including brake adjustments, shock service and flat fixes.

The restaurant, a fuel station for hungry outdoors lovers, serves burritos, power bowls, and specials including flatbreads and Buffalo cauliflower. Its outside dining patio is equipped with picnic tables and repurposed chair-lift seats.

Named for a Civilian Conservation Corps base camp where, 90 years ago, corps members lived and cut trails on Mount Mansfield, Ranch Camp operates as a kind of base camp for bikers. A trio of mountain biking friends started it three years ago.

"Not to sound trite or cliché, but we are as passionate a group of mountain bikers as you'll ever meet," co-owner Evan Chismark said. "It's woven into the fabric of our lives. We're [each] as big a bike dork as anybody else who walks through the doors." 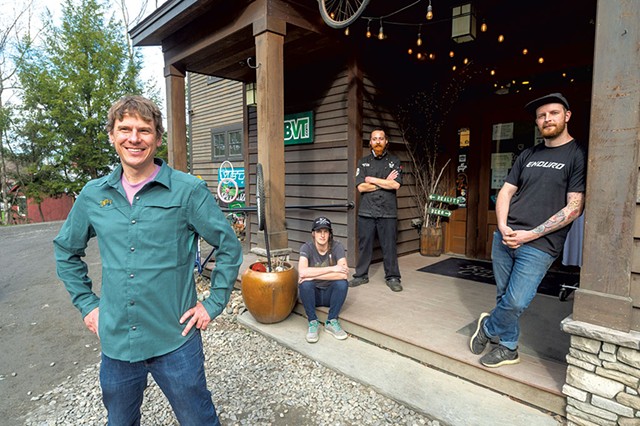 Interest in mountain biking has increased during the pandemic, according to Chismark. Second-home owners who relocated to Stowe wanted to purchase a bike. Kids who are into mountain biking came to the shop with their parents and said, "My dad and my mom need a mountain bike," Chismark said.

Even wannabe bikers will enjoy Ranch Camp and its environs. The business is located by a trailhead into Cady Hill Forest, some 320 acres of town-owned land crisscrossed by 11 miles of trails for nonmotorized recreation. In the warmer months, that means walking and biking. But Chismark noted that the mountain biking season is getting longer every year: "If the weather stays good, we could be riding for nine months."

On a recent afternoon, the occasional mountain biker flew through the woods on a path called Charlie's Trail, propelled by leg power up and over roots, rocks and long inclines. One young rider steered his bike slowly down a narrow wooden track.

Hats (but not helmets!) off to those who tackle such feats. It was easy to see why bikers would need to recharge with a meal at Ranch Camp.

"After a ride, it's great to hang out and have a burrito and a cold beer on the back porch," said Chris Brown, 52, of Stowe.

A ski instructor and real estate adviser, Brown has been mountain biking for more than 30 years. His two teenage sons have taken up the sport and ride with their friends on Stowe trails. The family takes their three mountain bikes to Ranch Camp for tune-ups, including an annual winter tune and seasonal repairs as needed.

"In the summertime, I ride a fair amount," Brown said. "Enough that I probably have two or three visits every summer just to replace parts. Things break." 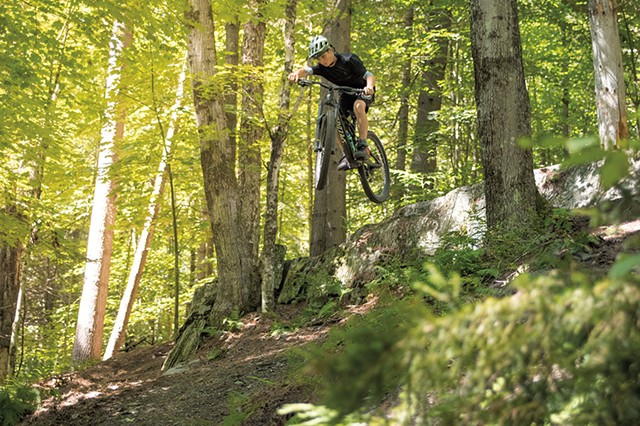 Cady Hill Forest is the flagship trail network of the Stowe Trails Partnership, where Chismark — whose background is in environmental law and policy — was formerly executive director. His business partners at Ranch Camp are Ryan Thibault, a graphic designer and marketing/branding specialist, and Nate Freund, a restaurateur who co-owns Sushi Yoshi.

Together, the men also run Mountain Bike Vermont (better known as MTBVT), which Thibault founded in 2010. The enterprise is centered on the state's mountain biking culture and promotes the sport by selling gear and apparel; sponsoring events, including a "bike culture variety show" called Green Mountain Showdown; and reviewing trails and products. (The events are currently virtual but could change to live-action this summer, according to Chismark.)

Executive chef Joe Rock, who formerly worked at Jay Peak Resort and St. Albans' One Federal Restaurant & Lounge, oversees the kitchens at both restaurants. He works with sous chef Cody Benz at Ranch Camp and chef Jordan Sullivan at the Backyard. 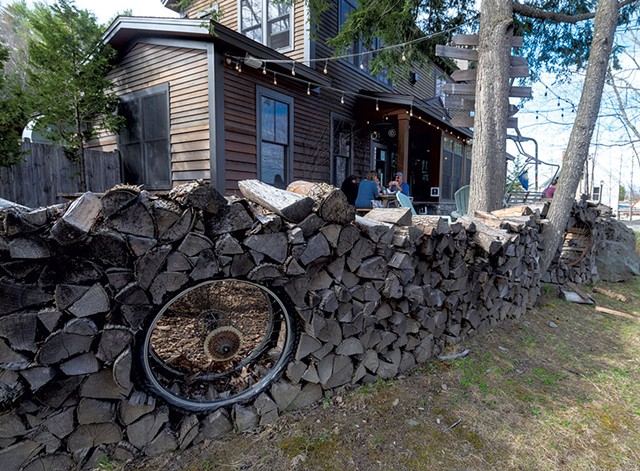 "That team of masterminds has come up with such an incredibly creative menu," Chismark said, praising the team's dedication and work ethic. "The food climate in Stowe is a tough place to compete. There are a lot of fun places to go. The fact that these guys have carved out a niche, it's a testament to how creative they are."

Both restaurants have easy access to the trail network that Chismark calls a "mini-utopia."

Cady Hill Forest offers trails with a range of difficulty levels; Ranch Camp staff provide gear and guidance based on a rider's experience. "Anyone can go out to Cady Forest and have a really good time," Chismark said.

One person who would like to do that is Rock, who's been at Ranch Camp since it opened. The 28-year-old graduate of New England Culinary Institute lives in St. Albans. Every day, he puts his mountain bike in his pickup truck and drives to work, hopeful for a chance to ride. Though new to the sport, he's a convert.

"What I love about it is getting out of the kitchen — the craziness of the kitchen," Rock said. "When I'm out mountain biking, it's just me and trees. I absolutely love it."

But so far this season, at least through mid-April, managing two kitchens has left him unable to hop on his bike and escape the craziness.

Rock has determined that mountain bikers generally fall into two eating types. The first group opts for a more plant-based and balanced diet, seeming "a little more conscious about what they eat," Rock said. The second prefers the more traditional "American kind of meat and potatoes."

"I strive to hit multiple groups," Rock said. "There's also the kids. I just try and put as much out there as I can, so basically anybody can eat."

My daughter and I had a wonderful to-go lunch from Ranch Camp earlier this month. The plant-based eaters must've beat me to the restaurant that day, because the special I wanted — a sweet potato burger — was sold out.

I ordered the ahi tuna burger instead. It was so good, it was hard to imagine that my first choice could've pleased me more. The deep-fried tuna was crispy on the outside and pink on the inside. Dressed in wasabi mayo and pickled ginger — which elevates any meal — the burger was hefty, bulging like a biker's calf muscle from its brioche roll.

My daughter loved her Monte Verde burrito: a whole-wheat tortilla stuffed with house-rubbed grilled chicken, brown rice, pico de gallo, guacamole and lentils. Due to its large size, we debated whether you could stuff it into a water-bottle holder on a mountain bike and take it for a spin.

Rock would probably know the answer to that question. In fact, he told me that if things slow down and he gets a chance to go for a ride, he'll eat a Monte Verde burrito when he's back at Ranch Camp.