Adult ballet students turn out for a workout 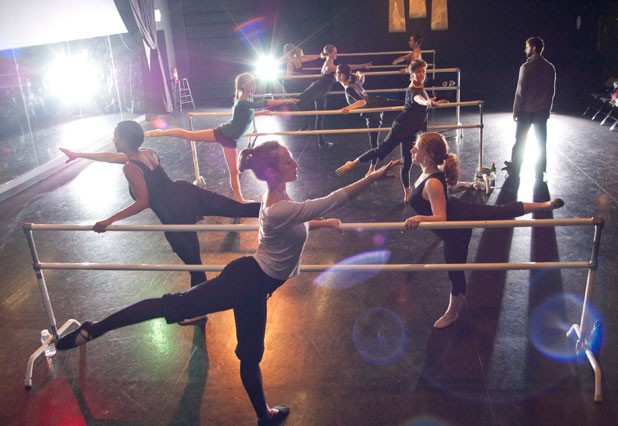 I took my first ballet class at 4 years old. For the next 10 years of training I kept my eyes on the prize, taking my cues from the older girls, whose feet were callused and raw, who rarely smiled or spoke and held their bodies as if they were made of porcelain. All I wanted was to be one of those girls, and when it became clear I never would, I quit.

Unfortunately, this is often how it goes with ballet. You either make it or you don’t. Your feet are either blessed with beautiful, high arches, or they’re an unfortunate pair of biscuits.

“Ballet has done itself a disservice,” says Chatch Pregger, who teaches at Spotlight on Dance in South Burlington and at the Ballet School of Vermont in St. Albans. “It’s given itself that image of aloofness.”

But what if it’s not as inaccessible as it appears? What if you can learn ballet just to keep fit? Or even, crazy as it sounds, for fun?

Turns out, plenty of people do. There were nine of us in Pregger’s beginner class at Spotlight on Dance last week. At least two women knew precisely what they were doing and had dressed the part, their black leotards layered with short wraparound sweaters and skirts. The rest of us were somewhat more disheveled, sending involuntary gasps — and looks that said, Holy crap, this is harder than I remembered! — rippling around the room after each combination.

In the latter group was Martha McKenzie Akey, who’s in her late fifties and took her first ballet class this fall. “We introduced ourselves [at that first class] with all our different ailments,” she says with a chuckle.

“I didn’t know what I was doing. I wasn’t even familiar with the terminology,” she says. “But I just fell in love with it.” It’s not surprising McKenzie Akey would turn to ballet eventually — she’s kept the books at Spotlight on Dance for the last 13 years. Her younger brother, Kevin McKenzie, is the artistic director of American Ballet Theatre (ABT) in New York.

Still, she has no illusions of ever being a ballerina. “It’s just something that I’ve loved,” she says. “And it’s more fun than lying on a Pilates mat.”

Julie Cohen, who took her first class at age 50 last year at the Flynn Center, thought it was too late for her to start ballet, “so I had to be content with watching dancers,” she writes in an email. “I do not have a ballet-type body, but when I get a move right and see it in the mirror, it feels amazing. I love ending the class all hot and sweaty … it’s quite a workout.”

Carole Podesta, 51, who calls herself a “ballerina wannabe,” says she swears she moves around more gracefully since she started the beginner class last year. At her last physical, she says, her doctor found she was a half inch taller, too.

Trish Siplon, 43, who teaches at St. Michael’s College, recently began taking ballet classes at the Flynn. She sums up the beginner experience on her blog 52 New Things: “Basically, it’s about learning some simple moves and exercises, and a little bit of French.”

That’s something you won’t get at the gym. What Siplon doesn’t mention is that those simple moves are brutal.

After the first 10 minutes of my class at Spotlight on Dance, my legs were on fire. In the mirrors, I saw in disturbing detail how much my body had changed since the last time I’d thrown my leg up in a grand battement. “This must be done with apparent ease, the rest of the body remaining quiet,” reads the ballet dictionary on ABT’s website. My leg flew out with alarming force, rattling my whole body as it crashed to the floor.

“You’re supposed to make it look easy,” Pregger explained after class. “The whole concept of pointe shoes is to look ethereal.”

Thankfully, etherealness isn’t the top priority in adult ballet classes. At the Flynn, Elizabeth Brody starts the hour with pushups to strengthen her adult dancers’ arms and backs. During floor sequences, instead of having one group move across the floor while the other waits its turn, she aims for continuous movement. “Let’s keep going; let’s keep your heart rate up,” she says.

“My goal for them is to really learn the technique,” Brody explains. “I want them to feel beautiful.”

With persistence, she adds, they’ll probably start looking beautiful, too. “You can develop that long, lean body, and you’re not building muscles,” she says. “It’s nothing I’m doing as a teacher; it’s inherent in the ballet training.”

Pregger often points out to his adult students that the core strength and control they develop through ballet can help them in unlikely places. Say you’re hiking up a steep mountain, he says, and need to step on a rock crevice that isn’t deep enough to accommodate your foot. You have to turn your foot out to the side and push yourself up with it.

“That’s very similar to how you’d go from a plié to a relevé,” Pregger says. Only a Vermonter would make such a connection — but it works for his students.

One of them is a woman in her sixties who’s learning ballet from scratch. Recently, she successfully balanced in sous-sus, up on her toes, her feet in a snug fifth position, for the first time. “You always hear that, after a certain point, your body can’t change,” Pregger says. “But it’s just not true.”

Ballet is all about lengthening and strengthening muscles “in a way that the body is exactly designed to do,” Pregger adds. You get in trouble when you’re overreaching or overextending, but those problems are most common with ambitious young dancers pushing themselves to kick the highest or land the most consecutive pirouettes. That kind of ruthlessness just doesn’t exist in adult beginner classes.

Well, not usually. I felt the old cutthroat side of me kick in as soon as I grabbed the barre. Which might explain why every single muscle in my body — from those between my toes to those beneath my shoulder blades to the sternomastoids in my neck — throbbed for days after the class.

Still, it was worth it. I may not have looked ethereal, but when I closed my eyes for a few seconds during the final port de bras sequence, I certainly felt it.