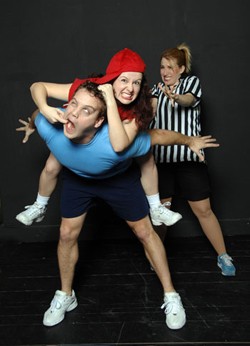 Humorist David Sedaris once described an elementary school Christmas play as "bone-crushing theater, the type our ancient ancestors used to oppress their enemies before the invention of the stretching rack." Parenting 101: A Musical Guide to Raising Parents has modernized theatrical torture at Burlington's Waterfront Theatre. Sedaris' mock review in "Front Row Center with Thaddeus Bristol" is a scathing exercise in sarcasm. But this is no joke: I would joyfully attend every children's holiday pageant between West Swanton and Wilmington if I could get back the two hours I spent suffering through the loud, crass, pointless Parenting.

Several startling aspects to this mind-numbing "new musical" are not about the music. For their first theatrical foray in Vermont, producers Susan and Nancy Holson scheduled an unprecedented run at an outlandish ticket price — 32 shows over four weeks, at $37.50 a pop with no discounts. No established local company charges as much, or undertakes such extended runs. The population and economic base simply don't support that. Despite a blitzkrieg of marketing, multiple performances of Parenting were cancelled by opening night. Listings continued to appear and disappear from the FlynnTix website calendar as the producers issued conflicting versions of show schedules. It's unclear whether Vermonters were wary with their wallets or simply uninterested in the material.

To create Parenting, Nancy Holson and Jay Falzone generated cutesy lyrics on the theme of child rearing from a steaming pile of crude clichés, tired truisms, offensive stereotypes and bathroom humor. But rather than compose new music, they "borrowed" dozens of familiar old tunes — classic hits from the 1960s and '70s, and a few daring pinches from Disney movies. The writers call it a "parody musical."

Apparently this "genre" is legal, thanks to those pioneers of jurisprudence, 2 Live Crew. Their 1992 rap parody of Roy Orbison's "Oh, Pretty Woman" ignited a case that eventually landed in the U.S. Supreme Court [Campbell v. Acuff-Rose Music]. Justice David Souter and his crew — unanimously down with the rappers' right to ridicule — established a number of tests that parody must meet to retain its "fair use" exemption from copyright law. (More later on this show's pass/fail status.)

The test that Parenting flat-out flunked was on its artistic and entertainment value. Hearing beloved old songs retooled with ghastly lyrics was like falling into a giant vat of Velveeta — cheesy and suffocating. Director Falzone and musical director Alexander Rovang whipped their four players into frenzied performances big enough to be seen from Neptune.

Elizabeth Payne's costumes and Jeff Modereger's set design added to the sense of chaos, with an endless clash of mismatched colors and a constant flash of changing set pieces. The set's core building blocks were several wooden cubes, painted differently on each side. They were repeatedly flipped, reconfigured, and moved on and off stage, while the backstage crew worked like dogs to keep up with hundreds of costume, set and prop changes.

The enforced hamminess grossly overshadowed cast members' talents. They sang their over-miked heads off and danced the over-choreographed numbers with abandon, but their individual performances were almost impossible to evaluate in the over-amplified swirl of sound. The pace was frantic, energy levels frenetic; decibels never dipped below earsplitting. It was all way too much, and yet in the end amounted only to dizzying visual stimulation and auditory overload.

This is the point in the review where I usually summarize the plot.

Even a musical revue needs more than a succession of chronological vignettes to give it dramatic structure. For example, I Love You, You're Perfect, Now Change, a revue about relationships, builds an engaging emotional arc — with insightful lyrics and tender musical moments — as it traces Man and Woman from the cave to the grave. In Parenting, no layers accrete to leave you with even a tiny pearl of wisdom. Instead, detritus accumulates in the churning wake of pseudo-vaudevillian slapstick.

And speaking of lack of wisdom, the show enshrines the worst of overindulgent, middle- and upper-class parenting: Bribe your kids! Cater to their tantrums! Lie to them! It was terrifying to see a large segment of the audience laughing heartily — perhaps knowingly? — at these values. Fiftysomething Boomers seemed to enjoy themselves, while the smattering of teens and seniors and one theater critic cringed.

But the worst value enshrined in Parenting is laziness. Even if this show falls within the Supreme Court's parody parameters, it still feels like cheating. Didn't these folks learn from their parents to do their own homework?

According to the Court, "The heart of any parodist's claim to quote from existing material is the use of some elements of a prior author's composition to create a new one that, at least in part, comments on that author's work." How does Holson and Falzone's number "No Sex for the Married Couple" measure up? A man and woman disrobe each other, interrupted by the kids, and try to get busy in bed. They sing a medley of songs from iconic Disney musicals.

"Supercalifragilisticexpialidocious," from Mary Poppins, becomes "Super psyched to shed our clothes and copulate." "Be My Guest," from Beauty and the Beast, gets the lyrics "It's been forever since I've seen your breast" and "Take this chance to get into your pants." I missed the exact phrasing used in "Zip-a-Dee-Do-Dah," from Song of the South — something about unzipping jeans — because there was very little singing. The band played extended instrumental excerpts while the couple groped each other. "Under the Sea," from The Little Mermaid, becomes "Under the sheets, you may be tired, but you require sexual feats . . . Mommy gets dirty after 8:30, hold onto your seats."

How does any of this comment on, respectively: a beloved nanny; a gracious dancing candelabra; the now-taboo character of Uncle Remus (such an anachronistic racial caricature that Disney won't release the film on DVD); or the underwater realm of a fishy princess? We could try to uncoil a Kundalini of cultural meta-analysis, but why bother? I've got $37.50 for the first person who can show me a believable line of parody between Remus singing a sunny tune to his animated Br'er patch pals and this crude sex scene in Parenting 101.

Brilliant, creative people toil in theater's trenches — actors, directors, playwrights and composers — and rarely earn fame or significant material reward. That's why this odious production is so deeply offensive. It's a messy vampire, dependent on the originality of others for its lifeblood.

True parody has its cultural place, such as Jon Stewart singing stanzas of "Cheney's Got a Gun" to Aerosmith's "Janie's Got a Gun" next time the veep's aim goes astray. But "Kung Fu Fighting" was Carl Douglas' one hit. Here's a thought: To use his song for Act I's fight scene, get permission and cut him a check! Changing a few words doesn't make it OK to take his lunch money. An entire evening of these unfunny, ethically dubious shenanigans certainly isn't worth forking over yours.